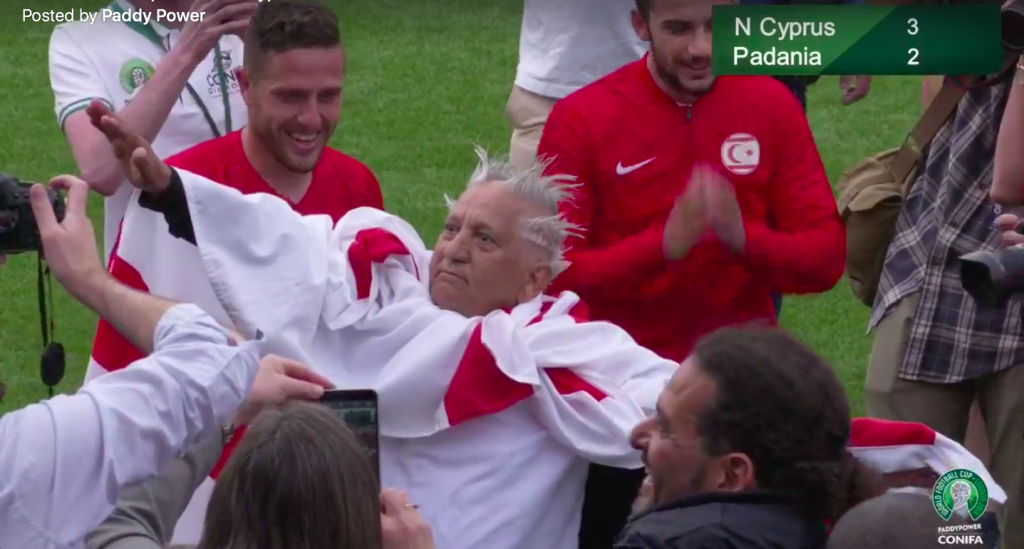 There were scenes of jubilation and a mini pitch invasion following the final whistle on Thursday after the first of the evening’s two semi-finals. North Cyprus booked their place in the final on Saturday by beating Padania 3-2 in an exciting game.

Get tickets here for the CONIFA World Cup Final

The CONIFA European champions from northern Italy were the more fancied team before kick-off. They had beaten the Turkish Cypriot side on penalties in the European Cup final staged at the Atatürk Stadium in Lefkoşa last year and they had not dropped a point in the London tournament, comfortably beating their opponents in the group and knockout rounds.

At 5pm on Thursday evening, the two teams stepped out onto the hallowed turf of non-league side Carshalton Athletic, on the outskirts of southwest London. For the fifth match in a row, North Cyprus fans were out in force, draping large TRNC flags across the ground, their chants accompanied by traditional davul and zurna.

Padania scored first, but North Cyprus equalised through Billy Mehmet. Just before half time, against the run of play, Padania scored again to go into the break 2-1 up. The second half saw the Turkish Cypriot side press forward, eager to get another equaliser. With just over a quarter of an hour left, it finally came courtesy of Halil Turan. Ten minutes later, Billy Mehmet scored the winning goal. Hysteria beckoned when the final whistle went.

HIGHLIGHTS: Watch Northern Cyprus progress to the to the @paddypower #WFC2018 Final – highlights via @fc_video pic.twitter.com/Xdd8i9D3QT

Kárpátalja beat Székely Land 4-2 in the second semi-final to confirm their place in the top two. Representing the Hungarian minority in Ukraine, Kárpátalja have gotten stronger as the tournament has gone. They showed their capability in the group stages, beating world cup holders Abkhazia 2-0.

Qualifying as Group B leaders, they now play Group B runners-up North Cyprus for the world cup. Their previous encounter, on the opening day of the tournament on 31 May ended 1-1.  The final has to have a winner, and North Cyprus will be hoping it’s their name which will be on the trophy.

The CONIFA World Cup takes place every two years, with North Cyprus a quarter-finalist in 2014, a semi-finalist in 2016, and now in the finals for the first time. They are number 3 in the world rankings, but hope to bounce to the top with their star players goalkeeper Hasan Piro, winger Halil Turan, and strikers Uğur Kök (this season’s TRNC Super League goal king, scoring 36 for Küçük Kaymaklı) and Billy Mehmet all in fine form.

The conclusion to the CONIFA World Cup is sure to be a cracking affair and given its North London staging, where a large number of Turkish Cypriots are based, is likely to be a sell-out.

Tickets for the final, Saturday 9 June

The grand final is being staged by Enfield Town in North London, and the game kicks off at 6pm. The ground has a capacity of just 3,000 so advance purchase of your tickets online is adviced or come early and buy at the turnstiles.

Tickets to the grand final are priced £11 for adults, or £5.50 for under 18s, and are available online or at the turnstiles. To buy in advance, click here.

Getting to Enfield Town for the final

The grounds are located just off the A10 and very close to the M25. It has an extensive car park, which holds around 300 cars.

For those using public transport, you can get an overground train to Enfield Chase (Zone 5) and catch the 191 bus from Windmill Hill/Enfield War Memorial (Bus Stop CD) to Baynes Close, about 24 minutes away. The stadium is a few minutes’ walk from there.