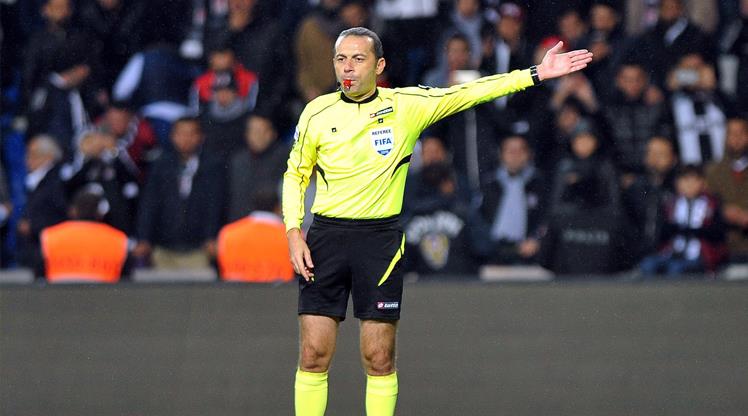 Turkish referee Cüneyt Çakır has been handed the responsibility of officiating the second semi-final between England and Croatia at the Luzhniki Stadium in Moscow on Wednesday night.

It will be the 41-year-old’s third match at this summer’s tournament. He was in charge during Iran’s 1-0 victory over Morocco and Nigeria’s 2-1 defeat against Argentina. Çakır issued a total of nine yellow cards during the two games.

Born in Istanbul and working in the insurance sector by day, Çakır has built up extensive experience officiating football matches since making his refereeing debut in 2001. He has been in charge of over 170 Super Lig games in Turkey, including the often volatile big derby games between rivals Beşiktaş, Fenerbahçe, Galatasaray, and Trabzonspor.

Çakır has been a FIFA-listed referee for the past 12 years and was elevated to UEFA’s elite group of referees in 2010. In 2015, he was in charge during Barcelona’s Champions League final 3-1 win against Juventus. He also officiated Holland versus Argentina in their semi-final clash at the World Cup in Brazil four years ago.

The Turkish referee already has a reputation among English fans having sent off three English players in the past: John Terry (2012 semi-final against Barcelona), pictured below as he gets the red card from Cüneyt Çakır, Gary Cahill (final of the 2012 FIFA Club World Cup) and Steven Gerrard (2012 World Cup qualifier against Ukraine).

His most significant controversy came when he sent off Manchester United’s Nani for a high tackle in the club’s last-16 defeat to Real Madrid during the 2013 Champions League campaign. The decision incurred the wrath of Sir Alex Ferguson and Man U fans, with one calling 999 to report a “crime”. The Nottingham-based 18-year-old fan later apologised for wasting police time.