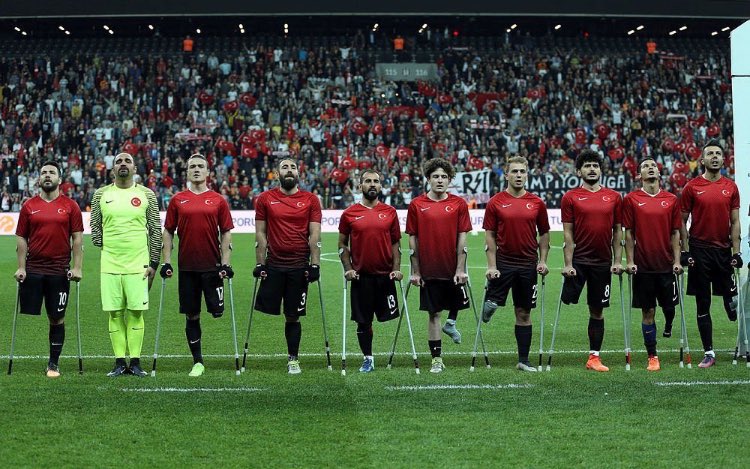 A last-minute goal by Turkish captain Osman Çakmak turned a dramatic game on its head and gave the hosts a 2.1 victory against England in the final of the European Amputee Football Championships.

The performance of Turkey’s triumphant amputee footballers was described as “incredible” by UEFA, while Turkish President Recep Tayyip Erdoğan tweeted “Turkey is proud of you”.

Amputee football games are last 50 minutes (two halves of 25 minutes), and the Turks had been pushed hard by a strong England team during the game, watched by 40,000 spectators at the Vodafone Arena in Beşiktaş, Istanbul, on Monday night.

Turkey took the lead on the stroke of half-time following a goal by Ömer Güleryüz. England equalised through Ray Westbrook at the end of normal time, scoring in the 50th minute. The winning goal from Çakmak came just two minutes later in injury time, sealing a well-deserved victory for the Turks

The Turkish amputee football team has been in fine form throughout the tournament, scoring 25 goals on their way to the finals, beating Germany, Georgia, Spain, Russia and Poland in the process.

The side has a strong record in international tournaments. Turkey was runner-up at the EAFC Finals in 2004 and again in 2008, and came third at the World Amputee Football Championships in 2007.