‘Cut Short, Live Long’: get your free pass to a new Turkish international film festival that starts on Monday

If you’re looking for films beyond the obvious choices, this week-long movie fest packed with gems produced by upcoming directors and screened at some of the world’s best film festivals is guaranteed quality viewing.

‘Cut Short, Live Long’ (CSLL) is a new annual short film festival that will be making its digital debut simultaneously in London, Berlin and Washington on Monday, 25 January.

The press release promises “innovative, impactful and fresh views from the world of rising Turkish cinema…making their way to your screen.”

A collaboration between three branches of the Yunus Emre Institute in London, Berlin and Washington, CSLL will screen 13 films online over six days. All Turkish and foreign movies will have English subtitles.

Two new films will be released each day, which can be viewed online at your leisure for the next 24 hours.

The films, varying from four to 20 minutes in length, cover a multitude of topics, from unspoken injustices (‘Interstate 8’ by Anne Thieme, 27 Jan.) to football stickers (Maradona’s Legs by Firas Khoury, 29 Jan.).

There’s a story about a struggling elderly lady making extraordinary efforts to save her neighbour’s pet (‘Tor’by Ragıp Türk, 25 Jan.) and another about a widow’s loneliness and her memories of a stain on her late husband’s jacket (Lekesiz/ Stainless by Mehmet Oğuz Yıldırım, 25 Jan.).

There’s also a fun animation about flamingos in an elevator with a racoon and his Bitcoin (‘Racoon with Bitcoin’ by Serdar Çotuk, 30 Jan.).

Several of the featured directors will be taking part in an online discussion about their films too, so check the programme for dates and full details.

Free passes are available for the festival, but the films can only be viewed in Germany, the United Kingdom, and the United States of America.

Click here for the CSLL festival programme and to register for your free festival pass. 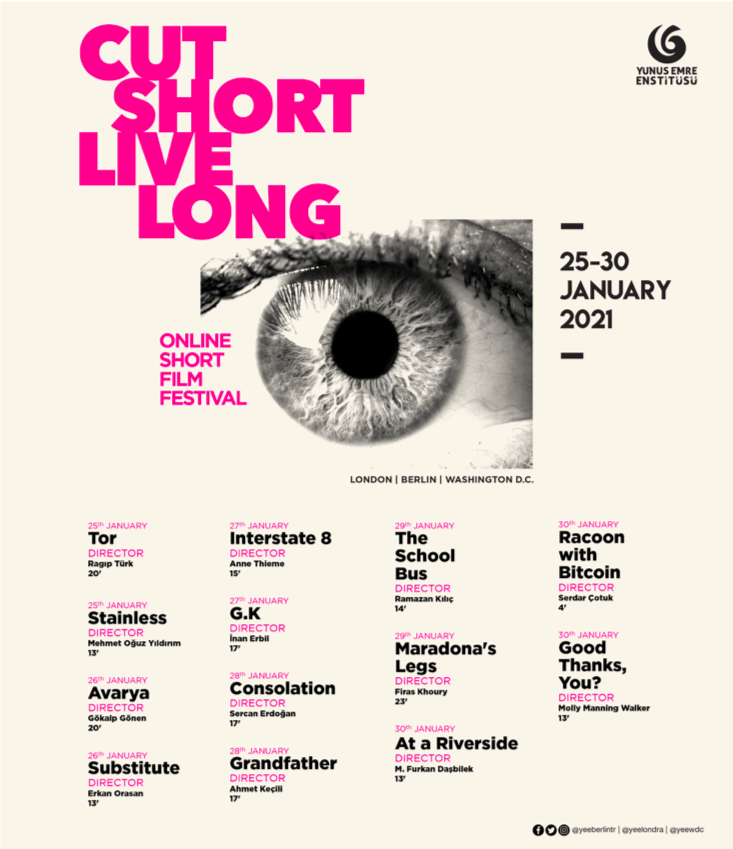