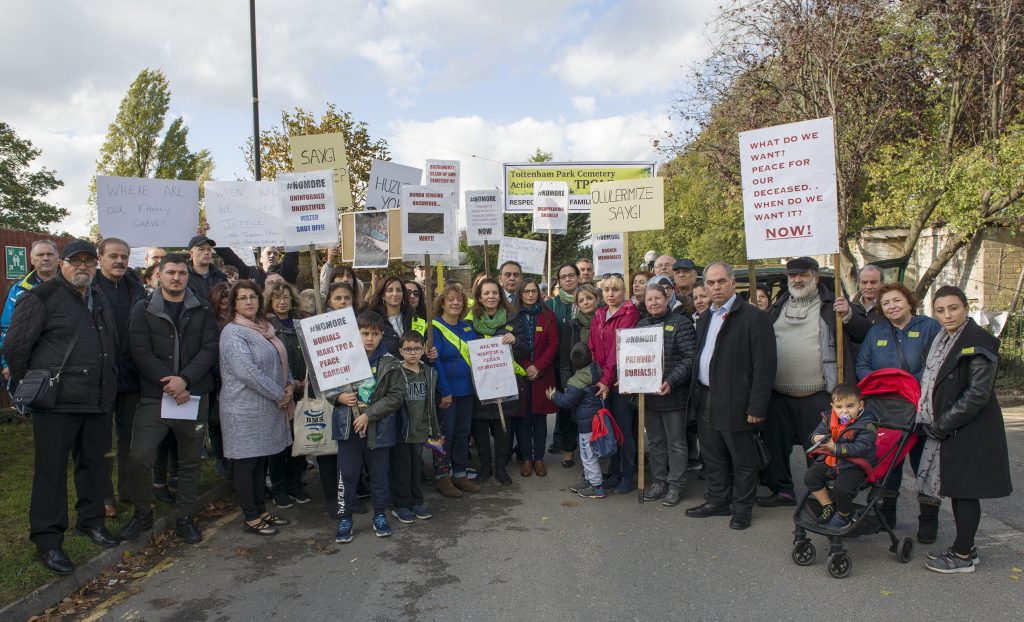 Dozens of people turned up on Saturday morning to protest the owners of Tottenham Park Cemetery. The site in North London is the largest burial ground in Britain for people of Turkish heritage.

Politicians such as Baroness Meral Hussein-Ece, Bambos Charalambous, the MP for Enfield Southgate, Nesil Çalışkan, the Leader of Enfield Council, councillors from Enfield and nearby Waltham Forest Councils, and TRNC London Representative Oya Tuncali also attended to show their support for the campaign by relatives demanding urgent improvements to the poorly maintained site.

Pointing to the fact older graves are disappearing, the group questioned if it was legal to replace these with “new graves”. They also highlighted that the water supply at the cemetery has been cut off for three weeks, without any “explanation” or “notices in the cemetery or on their website”.

Describing Tottenham Park Cemetery as being in an “appalling state”, Mrs Çalışkan told protestors that the Council is working with the Ministry of Justice “to have a full inspection of the cemetery’. She also emphasised that grieving families paid thousands for their burial plots, but were not getting the service they were entitled to. 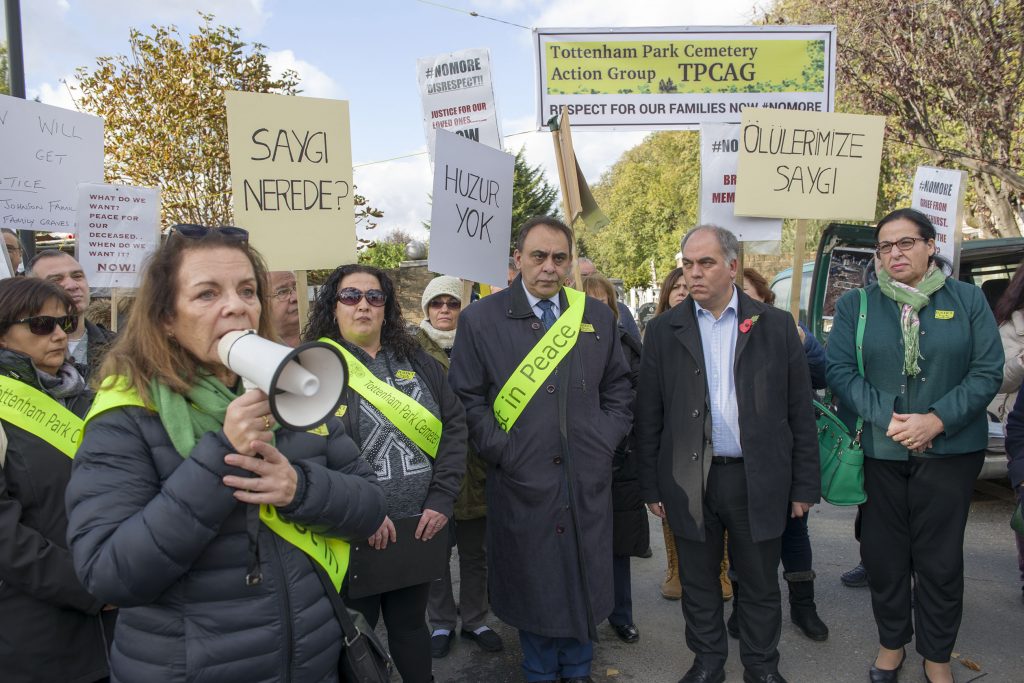 Senior TRNC diplomat Oya Tuncali attended with her husband İhsan Tuncali. She pledged to support a fundraising event in March next year, to be held at The Grand Palace in Wood Green.

Baroness Meral Hussein-Ece has been a core member of the action group since its inception at the end of last year. The Baroness’s mother and other relatives are all buried at the cemetery, and she spoke of her “horror” at the poor state of the cemetery when she tried to visit family graves last year when her mother passed away. She explained how she was hampered by the cramped conditions, overgrown weeds and trip hazards.

The Baroness outlined how she has been lobbying Enfield Council and the Ministry of Justice for months to take action on the growing list of complaints. In response, the Ministry has agreed to meet with Baroness Hussein-Ece and MP Mr Charalambous later this month.

The demonstrators also held a minute’s silence “in memory of those buried in the cemetery including the 39 war heroes whose graves are no longer visible.”

The 3 Nov. protest comes on the back of national media coverage about conditions at the North London cemetery, where visitors keep finding what are thought to be human remains scattered across the site. There are concerns the owners Badgehurst Limited, are digging up old graves in the packed cemetery and reusing the space for new burials without permission from the families and relevant authorities. A police investigation into the remains have been launched.

I joined @TPCTaction in solidarity this morning to protest against the appalling state of the cemetery & the actions of the owners.
I spoke about @EnfieldCouncil commitment to this important campaign & my call for the @MoJGovUK to urgently appoint an inspector pic.twitter.com/qId8MCI5EK