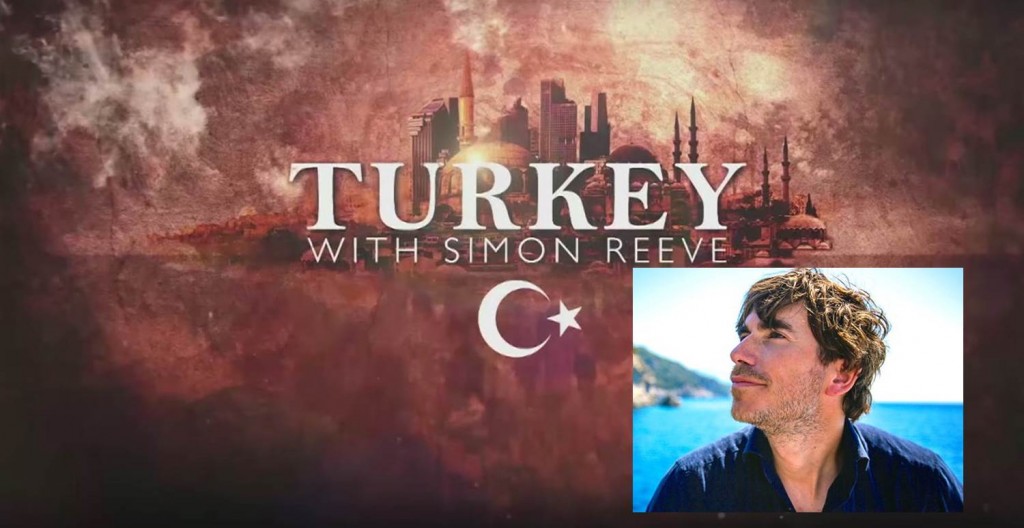 There doesn’t seem to be a day when Turkey is not in the news and for the most part, it’s often pretty negative. These days the UK, like the rest of the West, is preoccupied with lambasting Turkish President Recep Tayyip Erdoğan for his authoritarian ways and inflammatory comments, a far cry from a decade ago when they were all hailing the same man as a ‘role model’ for the region.

Cue documentary-maker Simon Reeve. Specialising in travelogues, he sets out to explore the fundamental changes that Turkey is undergoing.

A winner of the One World Broadcasting Trust Awards for his “outstanding contribution to greater world understanding”, the best-selling author and adventurer has already covered Greece and Ireland, but Turkey presents an altogether bigger challenge and it’s not just because of the size of the country.

Over a two part series on BBC2, Reeve travels around Turkey, presenting the country’s breath-taking scenery, while offering up-to-date social and political commentary. It’s well researched and filmed, with the programme’s choice of subjects and locations giving a good overview of the country which culturally, as well as geographically straddles two continents.

In the first one-hour programme, broadcast last Sunday, Reeve starts with visit to a vineyard near Çanakkale, where the owner talks about his challenges of producing alcohol in Turkey at a time when the government is curbing its domestic use with a ban on alcohol advertising and imposing huge taxes. Ironically, it’s not just Western Turks whose lifestyle is under threat, but the livelihoods of the pious women who pick the grapes, but “never touch a drop” because of their religious beliefs. The two groups have no problem getting on though, as we see at a post-harvest festival.

With so many successful entrepreneurs in Turkey, it’s not clear why Reeve and his team picked Ali Ağaoğlu. The crass and highly controversial billionaire property developer generates revulsion amongst most Turks and he was on form again for his BBC interview. Referring to his girlfriend as a possession, he tells Reeve “I am the owner of the owner of that bag” as he points to a designer handbag in his bedroom. Ağaoğlu claims to be responsible for keeping the UK economy going with his collection of flash cars and also recounts a time he told the Jordanian Queen to “f*** off” as he did not fancy her as his next door neighbour.

Reeve explores what Turkey has to offer holiday-makers, including its relatively new but burgeoning ‘halal tourism’, which is bucking the trend for the rest of the sector. He then travels east to visit a refugee camp by the Syrian border where shelling forms a constant reminder of the bitter war still being fought a few miles away. Exploring the camp, which has taken on the form of a small semi-permanent town, Reeve is blown away by the significant investment Turkey has made to welcome the Syrians, who tell him they prefer to stay in Turkey than risk going to Europe.

“Turkey is the most important country in the world. It’s a really critical time in its history and it’s an important place for us to understand.”

While the prism of his views reflects that of a secular Westerner, Reeves makes a real effort to remain balanced. He talks to a broad segment of society, helping him and his audiences to grasp why Erdoğan has such a huge following in the country – and for good reason. “One of the most successful democratically elected leaders on the planet, winning election after election”, Reeve uses the experience of one household in Istanbul to show how the Turkish President has transformed the lives of millions of poor people in the country.

For his introduction, Reeve said, “In many ways Turkey is the most important country in the world. It’s a really critical time in its history and it’s an important place for us to understand.”

Towards the end of the first programme, he concludes that Erdoğan’s indelible mark on Turkey neither caters exclusively to the East or West, but instead is forging its own path both politically and religiously.

The second part of his journey takes Reeve from the beautiful Taurus Mountains, north to the Black Sea Coast and via the nation’s capital comes full circle back to Istanbul. In the Northern Highlands he visits the community keeping an ancient whistling language alive; in the volatile South he witnesses the shocking effect of fighting in Kurdish areas and in Istanbul he takes part in a globally popular television drama, set in the palace of the Ottoman Sultans.

UK viewers can catch the broadcast on BBC 2 on Sunday at 9pm. Both this and last week’s episode of Turkey with Simon Reeve is also available on the BBC iPlayer.