The Metropolitan Police has come under fire after it emerged that trainers are using a case study that portrays Turks in the worst possible light as part of their education of new detectives.

The offensive material, which first came to light in a report by The Times on Friday (‘Racist’ Met police course for detectives ditched after protests by attendees’), presents an ethnically Turkish criminal as a “Turkish drug dealer on steroids” working for an organised crime family. The man is suspected of murder, rape, racism and assault against a vulnerable neighbour, with graphic details given.

Other case studies on the course, which was professionally developed by Babcock International in partnership with four London universities and approved by the Met, depicted Asians and Middle Eastern immigrants as money launderers and child abusers.

While there are criminals of Turkish origin who will be guilty of some of these crimes, it is highly unlikely that a single individual will possess all the horrific traits set out in the Met’s training manual.

The Turkish criminal case study, seen in full by T-VINE, portrays the man as gangster, who is suspected of slitting the throat of a Chinese moneylender.

He is said to regularly rape his Indian Hindu girlfriend, “sometimes in front of their 13 year-old daughter”, and forcing his girlfriend to eat beef, despite knowing this is against her faith.

The training material further states that the Turkish man claims as a “Muslim” he is “entitled to discipline his family and have sex on demand ‘under Sharia law’”.

He is also accused of being “racially abusive to his Greek Cypriot neighbours” and of tipping “their disabled son out of his wheelchair for a laugh.”

The shocking case study was introduced last autumn and, according to a statement from the Met, “no initial issues were highlighted via the recruit surveys in respect of the case study.”

Yet Ruwan Uduwerage-Perera, a founding member of the National Black Police Association and the course director at the University of East London – one of the four universities offering the Met training course – said in an email to his lecturers, seen by the Times: “The material is absolutely awful. The scenario is discriminatory.” 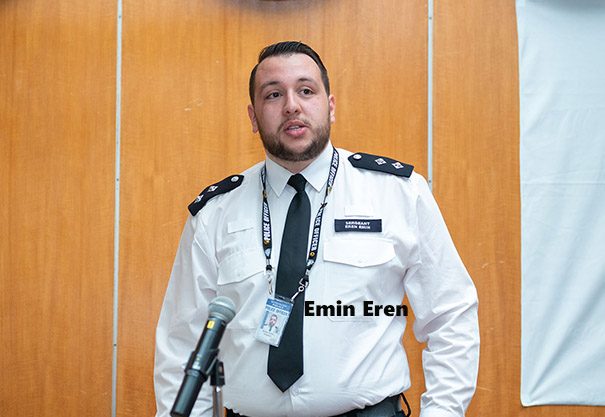 “The Turkish Police Association is aware of the [Times] article and other material circulating in relation to the MPS [Metropolitan Police Service] Detective Course and its alleged racial and discriminatory training programme. Our team of Executives will be meeting to discuss this matter, and we will be in consultation with the MPS management.

“We acknowledge the upset and outrage this has caused amongst our Turkish speaking community and we will be reaching out to our community members over the coming days. We have confirmation from the MPS that the case study has been pulled from the training curriculum.”

T-VINE also received a statement from the Met Police about the training material, given in full below. The statement offered no explanation on why those responsible for the training programme felt the need to attribute so many vile human traits to a Turk and how this would help detectives do their job better. Nor did it contain an apology for the offensive caused.

The Met Police, which was recently placed into Special Measures for multiple “systemic” failures in fighting crime and serving victims, has been accused of anti-Turkish bias and discrimination before.

The Met has previously tried to prevent ethnically Turkish Cypriot police officers from celebrating their roots by flying the TRNC flag. It has also failed to clamp down on PKK terror group supporters in the capital, who regularly flout the law by displaying symbols of the proscribed group.

Statement from the Met about its anti-Turkish racist case study

“The MPS works in commercial partnership with Babcock International for the development and delivery of its recruit training for new police officers. Babcock, in turn, partner with four London based Universities.

“The professional lecturing teams across Babcock and these Universities hold responsibility for designing and delivering a number of elements of the training, which is then reviewed and approved by the Met before use. All training content aligns to the National Police Curriculum which is owned by the College of Policing.

“Being academically accredited courses, each individual training programme is also subject to robust quality assurance through the Universities collectively to verify that it meets all criteria necessary for the award of the qualification (either a BSc (Hons) or Graduate Diploma in Professional Policing Practice).

“In relation to the case study in question, this features within the Degree Holder Entry Programme for Detectives. It was developed by the academic team, with operational input from the Met, including colleagues from the Crime Academy.

“Case studies are designed to cover a range of complex issues delivered by suitably qualified and experienced higher education lecturers from the Universities who can ensure that material is appropriately contextualised and anchored to the achievement of learning outcomes.

“The case study was used for the first time across September / October 2021. As with all of our learning inputs, they are continually reviewed to maximise their effectiveness. This includes surveying all recruits. Whilst no initial issues were highlighted via the recruit surveys in respect of the case study, subsequent feedback was received by a small number within the lecturing team regarding the level of complexity and the potential for misinterpretation in the delivery of the material to ensure that sensitive, diversity linked, subject matter was appropriately framed and culturally sensitive. As a result, each University was given delegated authority to adapt the case study locally using their professional judgement and understanding of their local lecturing team capability in order to ensure that any risks of misinterpretation were removed.

“More broadly, in late 2021, work commenced on the development of a new case study linked to wider changes to the overall structure of the Degree Holder Entry Programme For Detectives and recognising that all case studies have a natural shelf life as the Met continues to evolve and adapt to keep pace with and stay ahead of changes in criminal activity in its efforts to keep Londoners safe. In order to further strengthen the existing governance process, it is now standard practice that all new training material developed for use with Met officers / staff is put through the MPS Learning & Development Community Reference Group who have a remit to test, challenge and shape our thinking in relation to training content and approach.

“All recruits joining the Met via the Degree Holder Entry Programme for Detectives from May 2022 onwards, will complete the newly structured programme.”