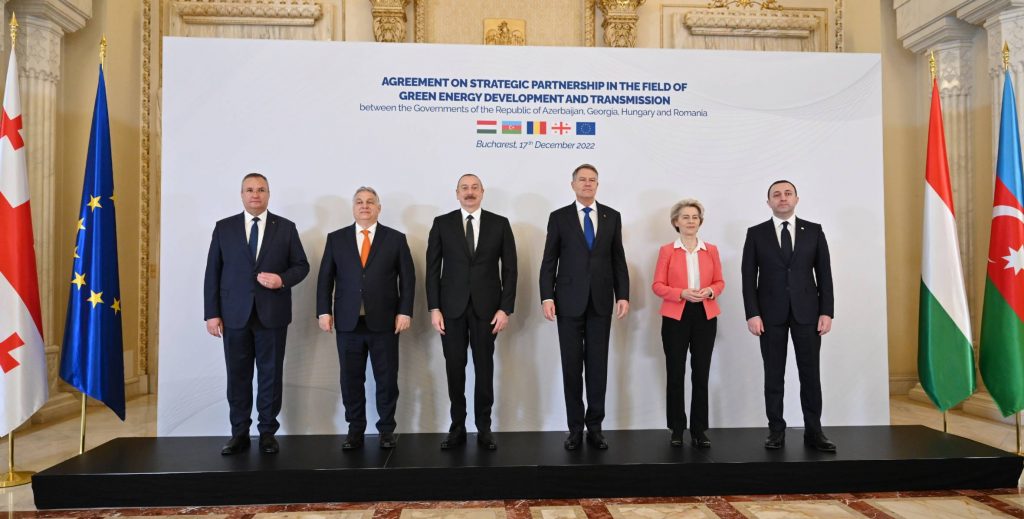 The strategic importance of a new green energy deal, inked by the leaders of Azerbaijan, Georgia, Hungary and Romania on 17 December, was underlined by a key Azerbaijani diplomat.

Azerbaijan’s ambassador to Hungary, Tahir Taghizadeh, told T-VINE that the agreement, is “a crucially important new step for Azerbaijan, together with our European partners, all in line with Azerbaijan’s long-term efforts to diversify energy supplies to Europe, to strengthen Europe’s energy security and to go further along the line of forging strategic partnerships.”

One of these steps includes a July agreement between European Commission President Ursula von der Leyen and President Aliyev that commits to doubling the amount of Azerbaijani gas supplied to the European Union and upscaling cooperation on renewables.

The December pact promises to bring green energy from the Caspian Sea, through the Black Sea and into Europe using an underwater electric cable, which would be the largest of its kind anywhere in the world when completed.

The green energy would come from planned Caspian windfarms, and Azerbaijan is inviting investors to build the turbines.

The cable could take three to four years to build, and construction is expected to go ahead after a feasibility study is completed at the end of 2023, according to forecasts from Hungary’s Foreign Minister Peter Szijjarto. According to the minister, the European Commission has allocated €2.3 billion for the project.

The new venture comes as part of European plans to promote renewable energy supplies and break reliance on Russian fossil fuels, which have become a point of contention amid Moscow’s ongoing war in Ukraine.

“the Organization of Turkic States serves as one of the main platforms for our partnership. The Representation Office of the OTS in Budapest…plays the role of European office of the organisation”

Ambassador Taghizadeh also told T-VINE about Azerbaijan’s relationship with Hungary through the Organization of Turkic States (OTS), an international body that promotes cooperation between countries that share Turkic language, heritage and culture.

The OTS currently has five members including Azerbaijan, Turkiye and the Central Asian states Kazakhstan, Kyrgyzstan, and Uzbekistan. Hungary, Turkmenistan and the Turkish Republic of Northern Cyprus are also observers. Hungary gained observer status in 2018, and has strengthened ties with the body and each of the five member states.

“Azerbaijan co-operates with Hungary successfully both on a bilateral and multilateral basis,” Ambassador Taghizadeh explained.

“In this regard, the Organization of Turkic States serves as one of the main platforms for our partnership. The Representation Office of the OTS in Budapest closely co-operates with the embassies of the member countries in Hungary and plays the role of European office of the organisation.

“The recent visit of the head of the office, Ambassador Janos Hovari, to Baku, as well as meetings held with Azerbaijani officials during their visits to Budapest, have paved a way for further strengthening of our mutually beneficial cooperation.”

Ambassador Taghizadeh added that Azerbaijani officials have taken part in events celebrating Hungary’s Turkic heritage with the purpose of “showcasing our shared historical roots, and promoting future plans and ideas for collaboration.”

When asked about Azerbaijan’s opening of an embassy in Albania last November, Ambassador Taghizadeh explained that this is part of Baku’s broader policy towards Europe.

“Central Europe and the Balkan region is of significant importance for Azerbaijan as demonstrated with the recent visits of the President of the Republic of Azerbaijan to Bulgaria, Serbia, and Romania.

“We share common values and historical background with these countries. In addition, their geographical location makes them reliable partners for the aforementioned energy projects forming a route through which energy diversification and security of Europe will be enabled” he said.