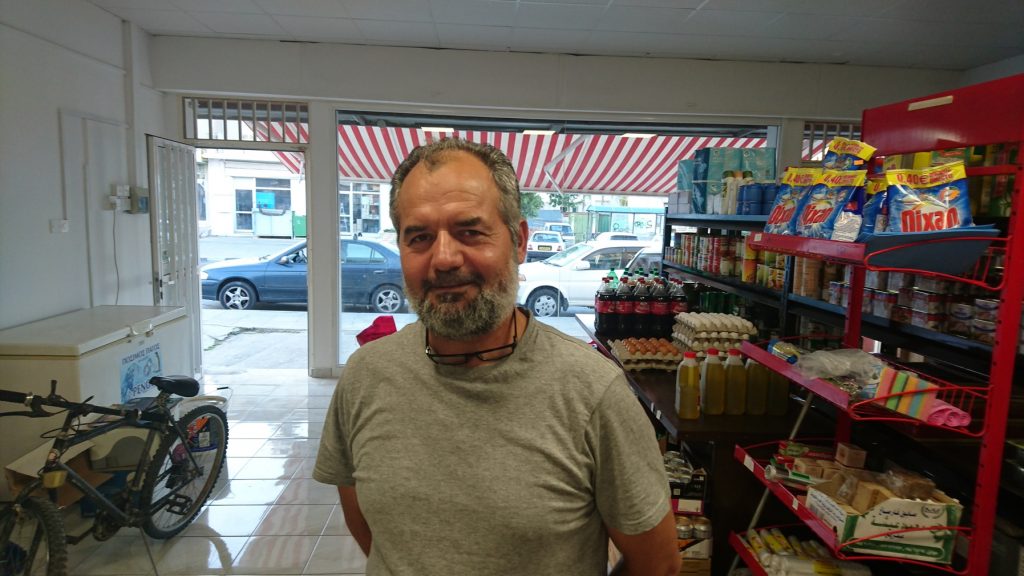 A community of ethnic Greek Muslims who were exiled from Greece to Syria in 1897 seek to return to their homeland in Crete. Yet despite presenting the deeds for properties seized by the Greek Orthodox Church 120 years ago, they once again find themselves victims of public resentment and institutional discrimination.

These are the words of Ali Tarzalaki (pictured above), 47, a construction worker who has been living in Cyprus for 25 years. He was visiting his cousin, who owns a butcher’s shop in the island’s southern city of Limassol.

For the Muslim community in southern Cyprus, where halal meat is often difficult to come by, this shop is a common meeting point where they can sit down, drink some traditional coffee, and chat.

The customers come from a range of different countries, but most are Syrians. Many of them arrived in Cyprus, just 60 kilometres west of Syria, before the Syrian civil war broke out in 2011. They initially came seeking work with the intention of a short-term stay, but many ended up settling on the island after marrying locals.

But what makes this particular butcher shop unique is that the owner, Saleem Tarzalaki, is from a small town on the Syrian coast called Hamidiyah, as are many of his customers. Like most people from Hamidiyah, both Saleem and his cousin Ali are ethnic Greeks.

In fact, the entire town of Hamidiyah was founded at the end of the 19th century by Ottoman Sultan Abdulhamid II for Greek Muslim refugees. Their grandparents fled from the island of Crete, their native homeland, at the height of a Greco-Turkish war in 1897. The conflict ultimately resulted in Greece’s annexation of Crete and the expulsion of its entire Muslim population due to their perceived loyalty to the defeated Ottoman Empire.

The trauma of the expulsion was widely felt by Ottoman Muslims. Indeed, such was its impact on the Muslim community in Cyprus that academic Niyazi Kizilyurek coined the term “Crete syndrome” to define an underlying phobia buried deep within the Turkish Cypriot collective psyche, which continues to shape their modern political identity even today.

Both Turkish and Greek historians, however, have often made the mistake of referring to the Cretan Muslims as Turks for reasons of self-interest. While the Greek camp sought to label their Cretan brethren as Turks in order to justify their expulsion from Greece, the Turkish camp also labelled them as such to convince Turks in Anatolia of expansionist claims to Crete.

Needless to say, nationalist sentiments were exceptionally high on both sides as Turks and Greeks engaged in numerous territorial disputes throughout the entire 19th century. During this period, being a Christian became synonymous with being Greek, and being a Muslim denoted that one was Turkish.

But for the Tarzalakis, there is no question over their identity. They are Greek Muslims…and no, they are not converts.

Ali and Saleem were born Muslims, as were their parents, their parents’ parents, and many generations of Greek ancestors before them. Their mother tongue has always been the Cretan dialect of Greek, which they still speak today thanks to the efforts of their elders to preserve the language in Hamidiyah. However, explaining this to others has proved difficult.

“They threw us out of Greece because we were Muslim. They said we were Turks. I found relatives in Crete, but they didn’t accept me. They said, ‘you are not Greek’,” Ali explains.

“For the Tarzalakis, there is no question over identity. They are Greek Muslims…and no, they are not converts”

Salem, who has been living in Cyprus for 20 years, believes the discrimination against Greek Muslims today, 120 years after they were expelled from Crete, is more than a matter of public resentment. It lies at the heart of Greece’s policy towards the Greek diaspora around the world, he argues.

“Around 30 years ago some of our people from Hamidiyah went back to Crete with the deeds for their properties in their hands and asked for their land back. The Greek government refused,” Saleem says. “There was a conversation about us between then-Greek prime minister Andreas Papandreou and then-Syrian president Hafez al Assad. In short, Papandreou did not want us back.”

Saleem does however point out that the Christian residents of Hamidiyah were treated differently. “The Greeks from Hamidiyah are mostly Muslims, but there are some Christians. They were accepted as Greeks,” he says.

Forty-two-year-old construction worker Hassan Amin Ventoragis also comes from Hamidiyah. Unlike the Tarzalaki cousins, he actually managed to visit Crete. He, however, entertains no ideas of moving back there. “I went to Crete, but I felt nothing. Other people say it is our homeland, but I call myself a Syrian,” he says proudly.

At the same time, Hassan Amin says that since moving to Cyprus over 20 years ago, he has been pushing forward his identity as a Greek for integration purposes. He has had to do this increasingly since the outbreak of the Syrian civil war, which sent a huge wave of refugees to Europe, triggering an anti-immigration backlash.

“When we started trying to take back our properties, the Church ordered these ties to be cut…because it had seized our properties for itself. Suddenly they decided that we were Syrians, & not Greek.”

“We didn’t face so much of a problem as Syrians before the war, but after the war attitudes changed, so we don’t promote our Syrian identity too much,” he admits. “Before the war, the Greek Cypriot authorities gave 200 people from Hamidiyah the right to stay, but nobody who arrived after the war was given this right.”

Hassan Amin also mentions that Greek attitudes towards their denationalised brethren weren’t always negative. “My father went to Greece as a Syrian government official. He was greeted kindly. They found out about Hamidiyah through him and sent some Greek journalists to shoot a documentary about us. They also took 100 people from our town on a free tour of Greece,” he recalls.

“But when we started trying to take back our properties, the Church ordered these ties to be cut. The Church interfered because it had seized our properties for itself. Suddenly they decided that we were Syrians, and not Greek.”

Nonetheless, a small community of Greek Muslims from Hamidiyah managed to settle in Crete two to three decades ago, albeit as foreigners without their properties. Others arrived after the Syrian civil war started as refugees.

While Greek Muslims in Hamidiyah were relatively unaffected by the civil war, some clashes between regime forces and members of their community who defected to the opposition occurred at the beginning of the conflict. In 2013, a social media post published by a pro-regime source accused them of betraying Syria. The post then threatened to forcefully deport them from the country in the same boats they arrived in.

Journalist Josko Baric, who runs the Syrian War Daily news blog, in April 2017 reported that regime forces were looting aid that had been sent to internally displaced refugees in Hamidiyah and engaging in criminal behaviour in the town. Noting that the allegations could not be confirmed, Baric wrote that regime forces “threatened those who distributed aid to Greeks of Hamidiyah.”

For the young men of Hamidiyah, there is no exception to the regime’s conscription law. Baric quoted the local council of Hamidiyah as recording that 22 men from the town died while fighting for the regime in 2014, adding that another death reportedly occurred during the battle for eastern Aleppo in late 2016.

Hussein Sadiq, 48, migrated to the Cretan city of Chania from Hamidiyah 33 years ago. He says that the number of Greek Muslims from Hamidiyah who fled to Crete after the war in Syria started had swelled as young men escaping from conscription to the regime forces began to arrive.

“We started off as just 50 people. This figure remained stable for a while but then our relatives started to come. Now we are 500,” Hussein explains. “Ninety people came in 2017 alone.”

Pre-war reports suggested that the Greek Muslim population of Hamidiyah was around 3,000 to 3,500. If accurate, this means that up to one in six Greek Muslims from Hamidiyah are now living in their native homeland as refugees.

While a press officer working at the Chania municipality acknowledged the existence of the returning Greek Muslim community, repeated attempts to speak to the city’s mayor on the subject were futile.

Hussein, who opened a small prayer hall for the community in the year 2000, says the Greek authorities have provided them no facilities or infrastructure. “The Greek government doesn’t help at all,” he says, adding that the authorities are yet to return his property to him despite presenting them with the deeds for his land.

Three of Hussein’s five children were born in Crete and therefore have Greek citizenship, but most returning Hamidiyah residents now live in Greece as Syrian refugees. “When it comes to ethnic Greek migrants from Russia, for example, they are given Greek citizenship because they are Christians, but they reject us because we are Muslims,” Hussein says.

“Perhaps for every 100 refugees in the camps, five to ten of them are Greeks from Hamidiyah, but the authorities just label them as Syrians and ignore them.”

Even volunteers and activists working with refugees in Greece appear to be unaware of the significance of the Hamidiyah community passing by undetected as regular Syrian refugees. Their exact whereabouts are therefore difficult to trace, and some are believed to have moved on to other countries in Europe.

“It does not matter if we are Muslims or Christians. What’s important is that we are from Crete”

Damian Mac Con Uladh, an Irish journalist who briefly worked with refugees on the Greek island of Lesbos, recalls coming in contact with a young Syrian man who surprised everyone when he spoke in fluent Greek. He told aid workers he was in fact an ethnic Greek from Syria and was trying to reach Crete, where he said his townspeople were waiting for him. Sadly, the journalist says he later lost contact with the young man.

One refugee from Hamidiyah, however, was tracked down. Ahmed Tarzalakis managed to return to the land of his grandparents after crossing the choppy Aegean waters from Turkey along with his wife and four children. They were fortunate enough to be accepted into a partnership programme run by Chania local Iraklis Drakakis, who aims to help Syrian refugees find homes in the city, with their rent being covered by the UN High Commissioner for Refugees (UNHCR).

Unlike most Syrian refugees seeking better lives in wealthier northern and central European countries, Ahmed prefers to stay in Crete. “For years we said we were Cretans. My father always told me until he died that he wanted to see Crete,” he told Haniotika News in September 2017. “Now I have brought my children here.”

“We are Cretans,” Ahmed says. “It does not matter if we are Muslims or Christians. What’s important is that we are from Crete.”

FOOTNOTE: I’d like to thank long-time friend and colleague Ioanna Sakoufaki for helping me with this article, which I dedicate to the memory my late friend Halla Barakat, a young Syrian-American journalist who paid the ultimate price for speaking out against war crimes in Syria. May she rest in eternal peace.