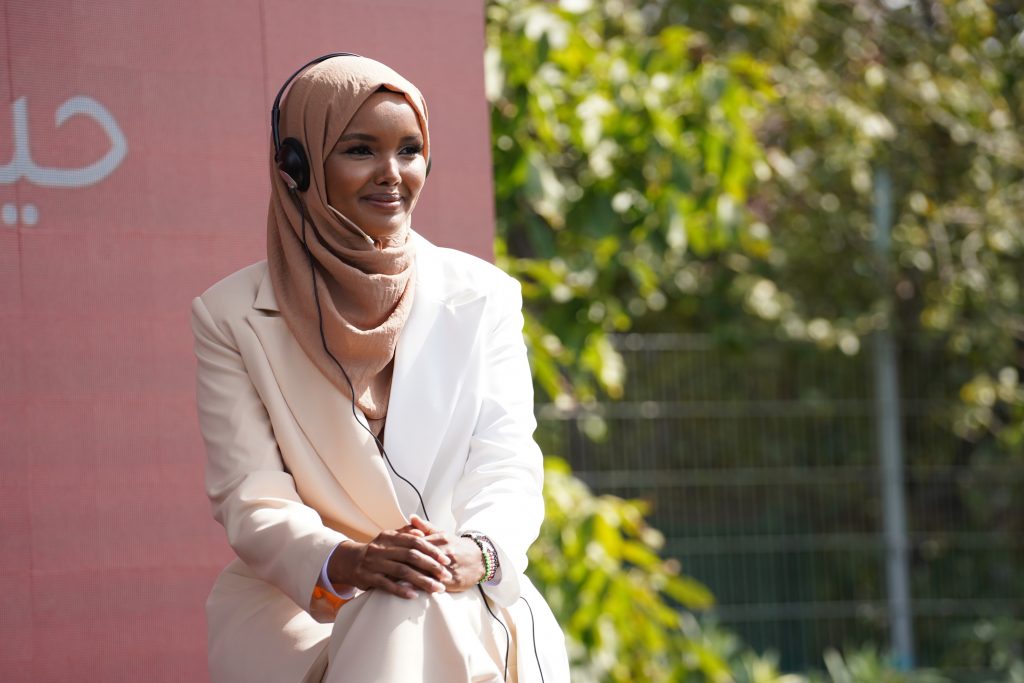 Earlier this week, Modanisa unveiled its global brand campaign and new slogan ‘Your World To Wear’ at a celebratory gathering in the grounds of its Istanbul headquarters.

Founder and CEO Kerim Türe chartered Modanisa’s rise from a start-up business in 2011 to the world’s largest modest fashion portal a decade later, along with his vision for future growth.

The popular e-tailer, which receives 30 million visitors to its site each month, is Turkey’s e-commerce export champion three years running. Having conquered North America, Europe and the Middle East, it is now eyeing expansion in southeast Asia, along with plans to open a base in London too.

Aden explained the concept behind the Your World to Wear slogan, which is being marketed in a new multi-million dollar international campaign.

“All women want to look and feel good, and to pursue their goals and dreams without compromising their beliefs. That includes us Muslim women,” Aden stated emphatically in her talk.

“Modanisa has empowered so many women – myself included – to have the confidence to do something we want to do,” she continued, drawing on a personal anecdote about her career to prove her point: “For me, that burkini from Modanisa allowed me to appear in the Miss Minnesota USA 2016 beauty pageant, which changed my life forever.”

Aden, who sensationally quit the fashion industry in November due to a lack of respect for her hijab was catapulted to international fame after becoming the first woman in a hijab to appear in an American beauty pageant. She appeared in the swimwear round in a Modanisa burkini.

Although she didn’t win the contest, the participation of a smart, pretty Muslim attracted major interest. Aden went on to break new ground again as she was signed to top modelling agency IMG and walked in a hijab on the catwalk for the likes of Tommy Hilfiger, Max Mara, Yeezy, Alberta Ferretti, and Sherri Hill.

“If we truly believe in freedom of religion and of expression, and equality, then these universal principles must be applied, without reservation, to all women. We need to be consistent in speaking out whenever and wherever women’s lives are being restricted, and others’ values are imposed on them, whether it’s in Iran or Afghanistan, or in France”

In a few years the Somali-American, who was born in a Kenyan refugee camp, has become an icon for Muslim women and girls around the world keen to emulate her lifestyle of combining Islam with modern living. Yet her outward life was not as happy as it seemed.

In November 2010, Aden used her Instagram account to document the pressure she had come under as a model to be “creative” with her headscarf. In one shoot, she was styled with a pair of jeans used instead of a headscarf, undermining the entire purpose of the hijab. Aden decided the compromises expected of her faith as a Muslim model were not worth it and quit.

Aden’s long history with Modanisa, initially as a customer, then model and latterly a collaborator, made it easy for her to return to fashion. As she stated in her talk on Tuesday, one of the reasons she chose to work with Modanisa is because “they understand and respect my faith and values as a Muslim woman,” adding, “This needs to be the norm across the fashion industry.”

Modanisa was launched specifically to cater for Muslim women wanting to be fashionable without compromising on their Islamic values. Their decade-long experience of sourcing suitable products for tens of millions of Muslim women worldwide, from swimwear to wedding dresses, has given the shopping portal vital insights into the needs of this globally diverse community.

“There are no limits to what any of us can do when the clothing options exist: we can play sport, socialise, dress for the office or for special occasions. We dress as we choose, according to our values and beliefs, and we are stronger for it. That is the power of Your World To Wear!” Aden said.

The former model also used the event to highlight the hypocrisy Muslim women face in the West, comparing how Norwegian athletes and German gymnasts were ‘cheered on’ this summer for wanting to cover up, while women wanting to do the same for religious reasons are regarded as “oppressed.”

She also took aim at tokenism by mainstream brands who want a large slice of the multi-billion dollar modest fashion industry while failing to speak out over Islamophobia.

“We also need to see more vocal support of Muslim women’s rights from mainstream brands who have jumped on to the modest fashion bandwagon,” said Aden.

“At times their interest in Muslim women seems superficial and tokenistic, a diversity tick box. These brands want our money, but they don’t speak up for us when we can’t swim in a burkini in France or when we have to choose between our hijab and a career in Germany.”

Aden also demanded consistency when it came to women’s rights and freedom of religion and expression:

“If we truly believe in freedom of religion and of expression, and in gender equality, then these universal principles must be applied, without reservation, to all women. We need to be consistent in speaking out whenever and wherever women’s lives are being restricted, and others’ values are imposed on them, whether it’s in Iran or Afghanistan, or in France and other countries in the European Union.”

CEO Türe had opened the hour-long conference on Tuesday, 14 September, by giving a brief history of Modanisa, which celebrated its tenth birthday in May. The company currently delivers to 140 countries, a fact which Türe said makes “Modanisa the fashion e-commerce platform currently serving the widest geography in the world.”

The innovative company pioneered Modest Fashion Week, which made its debut in Istanbul in 2016 and has also been staged in London, Dubai and Jakarta. Setting out its international stall early on, today Modanisa.com offers its content in six different languages: English, Turkish, Arabic, German, French and Bahasa.

Headquartered in Istanbul, 90% of Modanisa’s sales are to international customers. Its seven biggest markets are: France, Germany, Jordan, Turkey, UAE, UK, and USA, with Europe accounting for 30% of its business.

In June, the company criticised the European Union’s top court, the European Court of Justice, for upholding the right of employers wanting to ban religious symbols on the grounds of “religious neutrality”.

The case had involved two German Muslims who wear the hijab. Modanisa called the ban “dangerous and divisive.”