On the eve of the Cyprus talks at the United Nations in New York, Turkish Cypriot President Ersin Tatar will be buoyed by the results of a new survey about the type of political model Turkish Cypriots view as “most realistic” to resolve the long-running dispute. The most popular response by a long way was the president’s two-state solution.

Undertaken in the Turkish Republic of North Cyprus (TRNC) by Red Border Research and Consultancy, the survey quizzed 1,010 Turkish Cypriots about what the most likely political settlement model to the Cyprus dispute would be. The poll also asked what they felt about Turkey, the Turkish guarantees and Turkish troops on the island.

Interestingly, one in ten Turkish Cypriots questioned thought the most realistic outcome to end the Cyprus dispute is for North Cyprus to formally become a part of Turkey.

Back in January 2020, an even larger survey carried out by Gezici ahead of the TRNC Presidential Election had presented three options and asked Turkish Cypriots what their preferred solution to the Cyprus dispute is: a two state solution, a federation or a confederation.

Why such a drop in support for a 2-state solution? Red Border’s question not only offered more options as potential settlements of the decades-old dispute, but it also put the emphasis on what political model was “the most realistic”, as opposed to simply the ‘most preferred’ solution.

Knowing that living in an independent TRNC is the preferred option for most Turkish Cypriots, political opponents of President Tatar, including former President Mehmet Ali Talat, have regularly underlined the fact that there is no international support for a 2-state solution in Cyprus. They have instead urged the TRNC leader to remain within the bi-zonal, bi-communal federal model that is backed by the United Nations and other international actors.

The regular bashing of President Tatar’s 2-state ambition in opposition media could be one reason why only half of the respondents opted for this model. As much as it is desired, how realistic is it?

Nevertheless, the results show significant support for President Tatar’s vision, which he says reflects “the current realities on the island.” He is also a big advocate of closer ties with “Motherland Turkey”.

Taken together, 60% of Turkish Cypriots believe either a 2-state solution or for North Cyprus becoming a part of Turkey are the most realistic political models to end the Cyprus dispute. The numbers are a near reversal of the 67% that voted for a federal settlement in the UN-backed Annan Plan referendum of 2004. 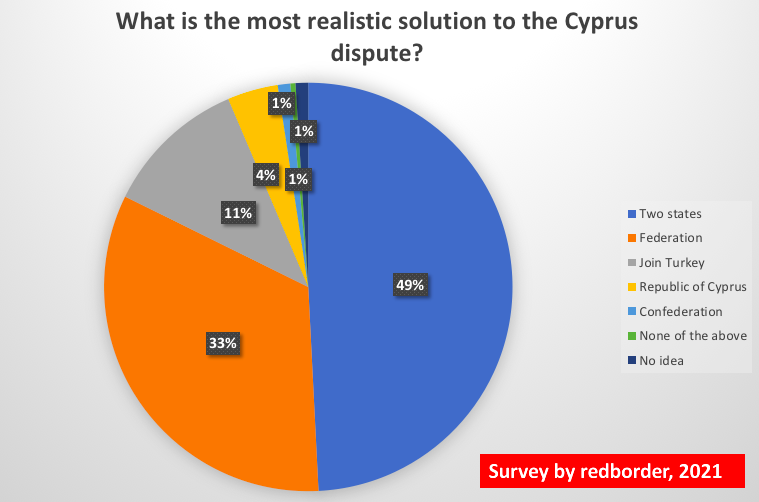 For any long-term observer of Cyprus politics, the current waning of support from Turkish Cypriots for a federal settlement with their neighbours south of the Green Line and the drift towards TRNC recognition is a natural outcome.

After nearly 40 years of negotiations, finally a deal was struck and on the eve of Cyprus’ admission to the European Union, both communities headed to the polls in a simultaneous referendum on 24 April 2004.

Two thirds of Turkish Cypriots voted in favour of unification in the referendum, in contrast to the 76% of Greek Cypriots who voted against the Annan Plan, despite their leader Tassos Papadopoulos claiming to support it at the final stage of negotiations at Bürgenstock in March of that year. Turkey, and specifically Recep Tayyip Erdoğan, then Prime Minister, was instrumental in working with the Turkish Cypriot Left to secure a “yes” vote, but as Greek Cypriots were guaranteed entry into the EU and had no penalty by voting against, they opted to keep control of the Republic of Cyprus and exclude their neighbours in the north.

The outcome for Turkish Cypriots was hugely disappointing. Despite proving they were pro-unification and given a wealth of assurances by the UN, EU and others to end their international isolation, little changed in their embargoed status. They remain deprived of full EU benefits, unable to trade, travel or communicate directly with the rest of the world, still banned from international sports and more.

It would have been easy to lose complete trust in the UN process and walk away from the federal talks, but Turkish Cypriots persevered for another decade.

In 2017, desperate for a deal, President Tatar’s predecessor Mustafa Akıncı agreed to a host of Greek Cypriot demands at the Crans Montana summit, including ending the contentious for some and vital for others Guarantor system, a treaty right that Turkey had invoked when she intervened on the island on 20 July 1974. Despite the generous terms offered by the Turkish Cypriot side, again backed by Erdoğan, Greek Cypriot leader Nicos Anastasiades walked away.

On the day the talks collapsed, President Akıncı said that Crans Montana was the “last effort” of his generation for a federal settlement and that they had been unsuccessful. He tried to row back on that position, creating a rift between himself and Ankara, and in last year’s Presidential Election Akıncı lost a tightly fought contest to Ankara’s preferred candidate Ersin Tatar, securing 48% of the vote to Tatar’s 52% in the run-off.

Since his victory, President Tatar and the TRNC’s right-wing government have repeated with great regularity that “the federal model is dead” due to the Greek Cypriots refusal to share power. Eight major UN plans for unification have been presented since 1977, all rejected by leaders on both the Greek Cypriot political left and right: regardless of who comes to power, the message is the same, there will be no deal with Turkish Cypriots if it gives them equal billing – the crux of the issue since 1963.

At the informal Cyprus talks in Geneva in April, President Tatar presented his ideas for resolving the Cyprus Problem with a demand that Greek Cypriots and the UN recognise the “sovereign equality and equal status” of Turkish Cypriots. As signatories to the 1960 treaties that established the Republic of Cyprus, Turkish Cypriots are already politically equal to Greek Cypriots, but the question of sovereignty has been a thorny one, with Greek Cypriots insisting it is indivisible.

Ahead of the New York talks this week, the Turkish Cypriot leader said he would only resume talks with his Greek Cypriot counterpart if the principle of “sovereign equality and equal status” was pre-agreed. This an attempt to break the Turkish Cypriot side free of the negotiations deadlock where equality exists at the UN negotiating table, but nowhere else of substance.

There is sympathy for that view among those in the North Cyprus, who continue to experience first-hand the discrimination that comes with being a non-recognised entity.

The Greek Cypriot-run Republic of Cyprus unilaterally closed the Green Line checkpoints in March 2020 and did not re-open until June of this year, creating hardship for tens of thousands.

The South Cyprus authorities’ policy of obstructing the lives of Turkish Cypriots and others in North Cyprus manifests itself at every given opportunity. Most recently, in the absurd situation where they secretly issued a directive banning the use of TRNC PCR tests at their airports in Larnaca and Paphos, while allowing these same documents to be used to cross the Green Line border.

Goods from North Cyprus destined for the EU via the Green Line, such as potatoes, have also been held up ‘due to a lack of inspectors’ resulting in these free goods perishing.

Turkish Cypriot hellim producers also face a huge threat to their livelihoods after their right to freely trade this Cypriot cheese was removed by Greek Cypriots, who registered all rights for both ‘halloumi’ and ‘hellim’ with the EU under the Republic of Cyprus, leaving traders at the mercy of Greek Cypriot approved inspectors.

The state-sponsored propaganda war against North Cyprus, which is vilified as an “illegally occupied state” despite being the recognised homeland of Turkish Cypriots, also continues. Even a visit by a foreign politician to the TRNC to meet with Turkish Cypriot politicians, as in the case of Dutch MP Liane den Haan last month, generated uproar in the South, with Greek Cypriot Finance Minister Constantinos Petrides leading the trolling of the Dutch politician.

These actions, and the plight of nearby Palestinians, who despite huge international sympathy and the recognition of over 100 states, continue to live in apartheid conditions under the hard right government of Israel have made many Turkish Cypriots reappraise their relationship with Ankara.

Following major shelling of Gaza that killed scores of Palestinians in May, President Tatar issued a strongly worded statement pledging that the “TRNC will not be Gaza.” Not surprisingly, the survey shows overwhelming backing for the continued presence of Turkey in North Cyprus.

The findings by Red Border are in line with other research, with the Turkish army and guarantees traditionally receiving a very high degree of support from Turkish Cypriots.

The new survey also asked about attitudes towards Turkey. Last year, President Akıncı had ran on a slogan of “biat değil özgürlük” [“freedom not submission”]. The polarising campaign attracted left wing supporters, but was a turn off for many other Turkish Cypriots, a view underlined in the new survey. 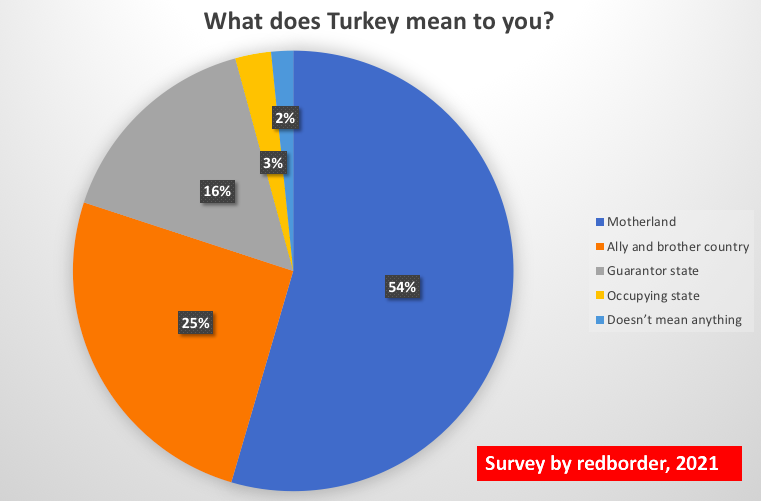 The results of the survey, commissioned by Turkish Cypriot President Ersin Tatar ahead of his New York trip, were shared on the Presidency website last week. The story doesn’t say when exactly the poll was undertaken, or provide a breakdown of the 1,010 sample according to their gender, political party preferences, geographic location in the Turkish Republic of North Cyprus, and ages.

The first question asked: When it comes to the Cyprus dispute, which of the possible settlement options given do you find most realistic? Five political solutions were given as options, along with ‘none of them’ and ‘no idea’. The results were as follows:

49.2% opted for 2 equal, sovereign states as the most realistic solution model.

33.1% believe a federal solution is the most likely solution.

11.3% believe the most feasible solution is for North Cyprus to become a part of Turkey.

4.0% feel a solution is most likely under the Republic of Cyprus.

1.0% see a confederation as the most likely solution.

0.4% said none of the above five settlement options were realistic.

The second question asked Turkish Cypriots how important they viewed the Turkish guarantees and troops on the island as part of resolving the Cyprus dispute. These were asked as two separate questions. 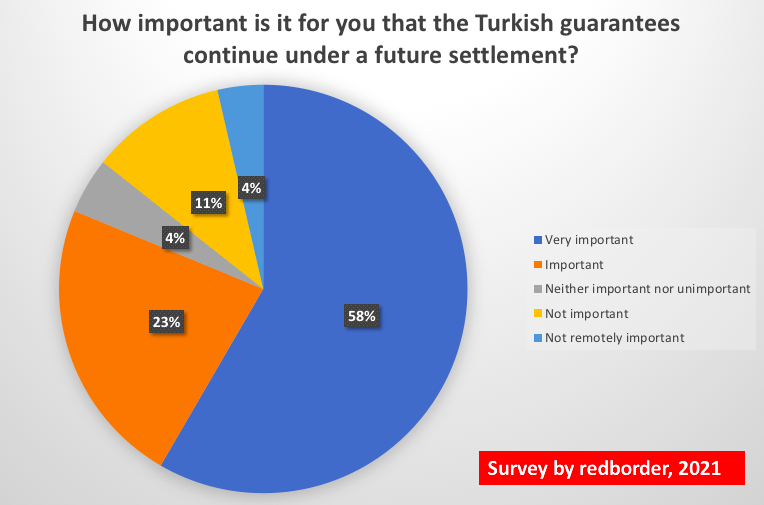 The first part of question 2 asked: ‘How important is it for you that the Turkish guarantees continue under a future settlement?’

58.2% said it is “very important” to them that the Turkish guarantees continued.

22.8% answered it is “important” the Turkish guarantees continued.

4.4% said the Turkish guarantees continuing is “neither important nor unimportant” to them.

10.7% said the Turkish guarantees are “not important” to them.

3.6% stated that the Turkish guarantees are “not remotely important” to them and a future solution.

The second part of question 2 asked: ‘How important is it for you for that Turkish troops to remain on the island as part of a future settlement?’

58.8% said it is “very important” to them that Turkish trooped remain in Cyprus.

24.4% said it is “important” that Turkish troops remain as part of a future settlement.

4.2% said Turkish troops staying on the island is “neither important nor unimportant”.

9.9% answered that Turkish troops remaining on the island are “not important”.

2.6% said that Turkish troops in Cyprus are “not remotely important” to them and a future solution. 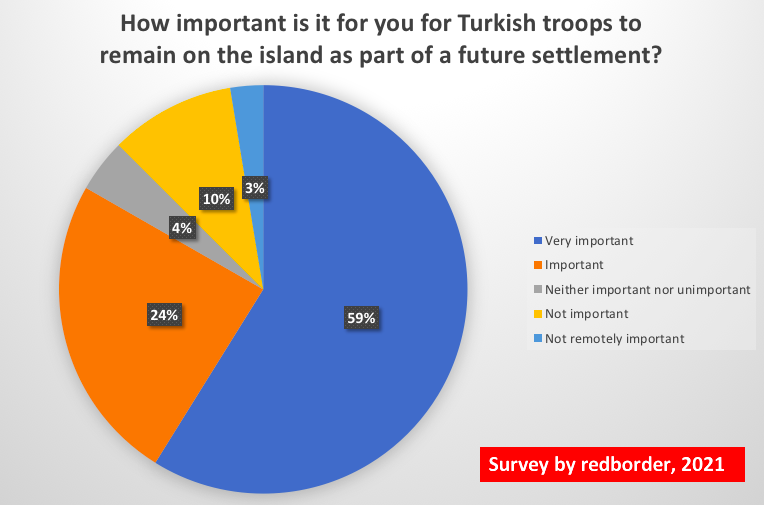 The third and final question asked those surveyed: What does Turkey mean to you? There were five options to choose from.