Huge fire in tourist region of Antalya claims 3 lives, as ash falls on nearby North Cyprus 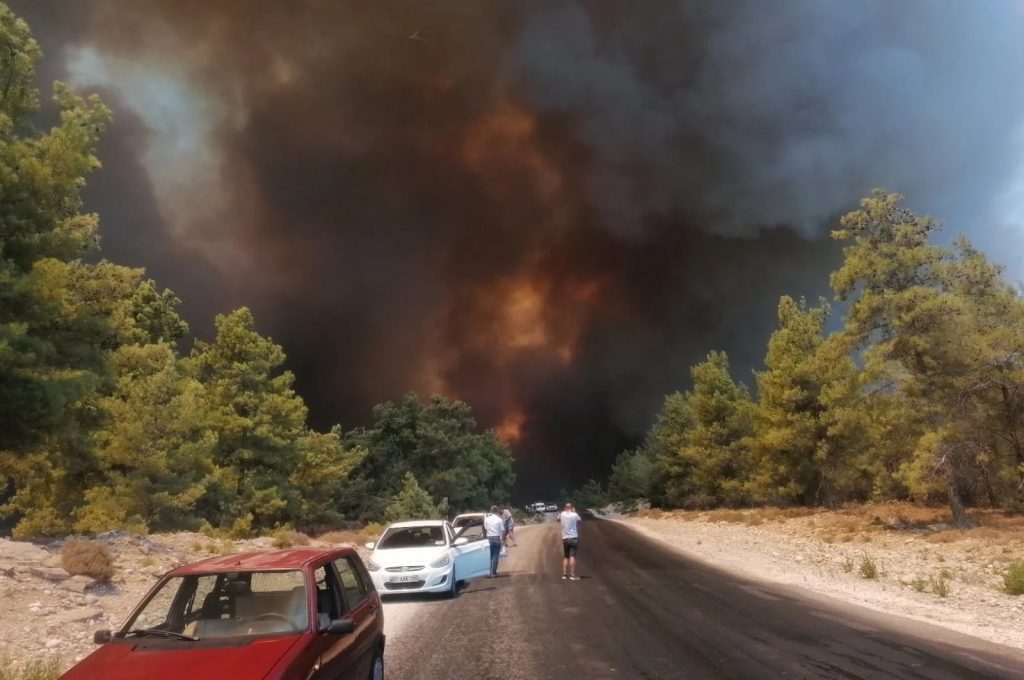 Multiple forest fires broke out across Antalya on July 28. Initially they were concentrated in Manavgat, a town 75 km from Antalya city centre. Another blaze was reported later that day in Akseki district, around 75 km northeast of Manavgat.

“The fire in Manavgat is under control [after 21 hours of firefighting], but there is an ongoing fire in Akseki,” Turkish Agriculture and Forestry Minister Bekir Pakdemirli told reporters in Antalya earlier today, Thursday 29 July.

Fire fighters looked like they were winning the battle to bring the fires under control, but tonight several appear to have re-ignited.

Minister Pakdemirli confirmed that one of the victims was an 82-year-old man, who was found dead during the evacuation of the Kepezbeleni district, some 16 kilometres (10 miles) northeast of Manavgat.

Local authorities evacuated 18 villages and districts in Antalya, the minister said, with ten people rescued by Oymapınar dam after their exist was cut off by the fire.

The fire is believed to have started in the Yeniköy neighbourhood of Manavgat. Police are investigating if arson was involved as the fires were reported to have taken hold simultaneously in four different locations in Manavgat, ravaging the popular Mediterranean province.

What is happening in #Manavgat Antalya
(a thread) pic.twitter.com/SZvwA3QLSM

Tourists shared shots of flames coming close to their hotels and their pools covered in ash. There have also been distressing photos of wildlife singed and of local people weeping, covered in soot, having lost their homes and livelihoods to the fire. Others were seeing trying to flee with livestock.

One farmer, Galip Kara, cried as he told local media how he was forced to let his farm animals free, after waiting as long as he could for rescue, before he and his family fled for their lives.

“I released my animals in the barn. I took my wife and children and ran away. We barely saved our lives. The last time I looked from the hilltop, the neighbourhood was on fire. The fire is approaching the centre of Manavgat,” Mr Kara said.

Huge smoke clouds billowing from fires ravaging forest & towns of #Manavgat near to our hotel yesterday. Thankfully fires nearest us are out but many rage along the coast. Today’s sky hangs heavy, a burnt orange hue, air hazy with smoke, a gentle rain of ash falls on everything. pic.twitter.com/KO0oZL410s

“Huge smoke clouds billowing from fires ravaging forest & towns of #Manavgat near to our hotel yesterday. Thankfully fires nearest us are out but many rage along the coast. Today’s sky hangs heavy, a burnt orange hue, air hazy with smoke, a gentle rain of ash falls on everything,” tweeted tourist Mitch Whitehead.

Many properties in the Çolaklı, Evrenseki, Yeniköy, and Kalemler neighbourhoods have been badly damaged by the fire. People living over 45 miles away reported seeing smoke from the fire.

Ash from the blaze also fell in the Turkish Republic of North Cyprus (TRNC), which is some 40 miles away across the Mediterranean Sea. Former TRNC Foreign Minister Kudret Özersay wrote in Turkish on his Facebook page:

“It is raining fine ash from the sky over Girne, the colour of the air has turned brown, like tears… It must be related to the Manavgat fire, it is very painful…Get well soon Turkey, and all humanity.”