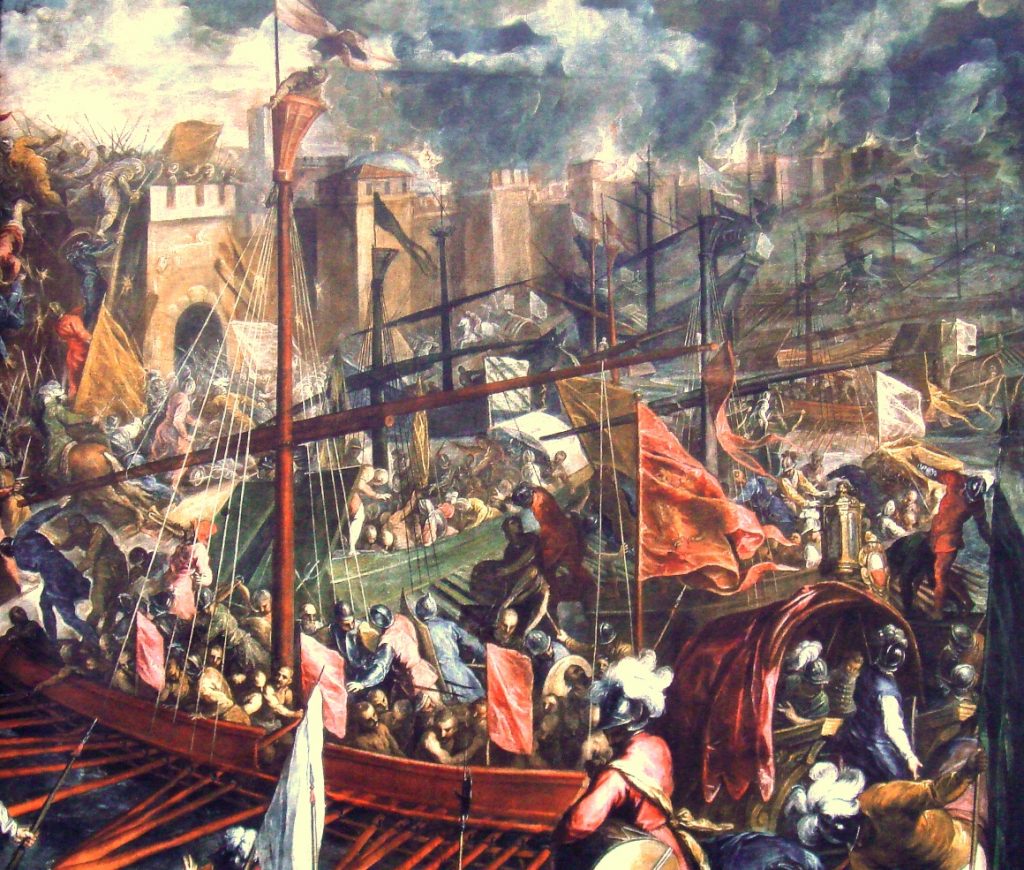 More than 800 years ago between April and May 1204, Constantinople (now Istanbul) was conquered by the ill-fated and failed Fourth Crusade. The city subsequently became the capital of a newly formed crusader state known as the Latin Empire.

By 1204, the practice of crusading was over a century old. Under a Catholic Church that was increasingly interested in controlling violence in Europe—initially for peaceful purposes—with growing enthusiasm for pilgrimage to Jerusalem among its flock, crusading was first preached in November 1095 when Pope Urban II gave a sermon in Clermont, France. Accusing Jerusalem’s Muslim rulers of atrocities against local Christians, he declared that “A race absolutely alien to God has invaded the land of Christians, has reduced the people with sword, rapine and flame.”

After alleging further cruelty, Urban entreated his audience to action, “On whom, therefore does the task lie of avenging this, of redeeming this situation, if not on you, upon whom above all nations God has bestowed outstanding glory in arms, magnitude of heart, litheness of body and strength to humble anyone who resists you.”

Within months, thousands of men and women, from knights to paupers answered his call for an armed pilgrimage to Jerusalem, and the First Crusade began.

The First Crusade, which ended with the conquest of Jerusalem in 1099, resulted in the formation of several crusader states or Frankish lordships in the Middle East of which the largest four were the Kingdom of Jerusalem, the Principality of Antioch, and the Counties of Edessa and Tripoli.

The lordships at Antioch and Edessa, which respectively constitute present day Antakya and Şanlıurfa, show us that the Latin Empire of Constantinople of 1204 was not the first crusader state to have been established in the territory that comprises today’s Republic of Turkey. The result of the Fourth Crusade then is simply one more part of the country’s long and rich crusader history.

By the time the Latin Empire was established however, the fragmented Middle East into which the crusader states so easily blended was gone. Though the Frankish crusaders had arrived as conquerors, they quickly set up their own lordships and integrated into regional affairs, marrying local Christians, speaking local languages, trading, and sharing resources and territory with their neighbours both Muslim and Christian. These Frankish rulers even fought amongst themselves and made alliances against one another with their Muslim counterparts.

By the dawn of the 1200s however, the landscape had changed as ambitious Muslim rulers began to conquer smaller lordships in the region, including Frankish ones established in the previous century. The County of Edessa met its end at the hands of the Turkish Selçuk ruler of Mosul, Imad ad-Din Zengi in 1144, while Jerusalem was conquered in 1187 by the famous Kurdish warrior Salah al-Din, the founder of the Ayyubid dynasty who would later establish himself as a sultan over much of Egypt, the Levant and Syria.

Shortly before the Fourth Crusade, the Ayyubid and Byzantine Empires along with the Selçuk Sultanate of Rum (Anatolia) were the main powers in the Middle East.

A new crusader state was also founded in Cyprus by King Richard I of England who conquered the island on his way to the Holy Land on the Third Crusade in 1191. After this, the port of Famagusta became a great trading hub.

In August 1198, Pope Innocent III declared the need to re-capture Jerusalem, prompting the Fourth Crusade. The aim was to create a local foothold by first conquering Cairo and then move on to Jerusalem. The campaign, however, was swayed towards Constantinople by a series of unfortunate events. 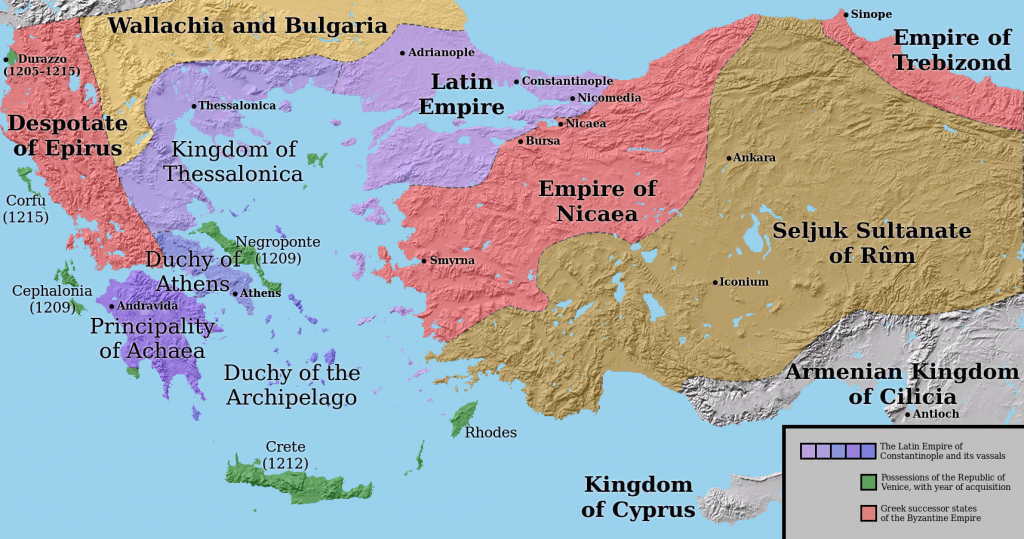 The expedition was to be led by French and Belgian nobles including Count Theobald of Champagne, Count Louis of Blois and Count Baldwin of Flanders. These three men sent a delegation of six envoys to find financial assistance for the journey. The envoys travelled to Venice bearing the counts’ seals and with these, the authority to make any necessary arrangements on their behalf.

Enrico Dandolo, ruler or doge of the Venetian Republic, backed the conquest of Constantinople

While in Venice, according to Geoffrey of Villehardouin the Marshal of Champagne and one of Count Theobald’s two envoys who participated in the campaign and recorded it in his chronicle “The Conquest of Constantinople”, the ruler or doge of the Venetian Republic, Enrico Dandolo offered to build ships to transport 4,500 horses and knights with 9,000 squires and 20,000 foot sergeants to Egypt in exchange for a payment of 94,000 marks.

The envoys duly accepted and the deal was confirmed in Venice’s Church of St Mark before thousands of onlookers during a Catholic mass in which the envoys called on the congregation to support the venture. According to Villehardouin they pleaded “My lords, the most eminent and powerful barons of France have sent us to you, and they beg you to take pity on Jerusalem, which is enslaved by the Turks, and to be willing for God’s sake, to join them in avenging Christ’s dishonour.”

Following this, the doge himself and many other Venetians joined the crusade. But the campaign met its first wrong turn while the force was amassing in Venice between April and September 1202, after being let down by various factions who decided to take alternative routes across the Mediterranean from other ports instead. This meant that the army waiting at Venice would be considerably smaller than that which the Venetians had prepared to transport. The lacking numbers now meant that the crusaders could not raise high enough funds to meet the required payment.

It was at this point where the doge offered them an additional deal. Dandolo offered to suspend the debts until the crusaders had recovered sufficient spoils from the campaign so as to repay him in exchange for their assistance in seizing the city of Zara (Zadar in modern-day Croatia), which the King of Hungary had captured from Venice. That November the crusader army advanced on Zara, capturing the city and remaining there for the winter. During their stay, infighting emerged among the occupiers as brawls broke out between the French and Venetians inflicting further losses.

For his part, the Pope had been unhappy with the diversion to Zara, but, in order to preserve the campaign, informed the crusaders that he absolved them of their sins and called upon them to continue.

It was also at Zara that the crusade’s destination was diverted once again, this time permanently due to Alexius, a Byzantine Prince. The young man had escaped imprisonment by his uncle, also named Alexius who held the Byzantine throne after supplanting, blinding and imprisoning the prince’s father Isaac who had been the sitting Emperor. Prince Alexius made contact with the crusaders before they left Venice for Zara.

On hearing of young Alexius’ plight, the counts informed his representatives that they would restore the Byzantine throne to the Prince in return for assistance in their crusade. The final arrangement however would materialise in Zara when Prince Alexius’ messengers informed the crusaders among other promises, that he would bring the Byzantine Empire from the Orthodox over to the Catholic Church, pay 200,000 silver marks, give provisions for the crusading army and personally accompany this force to Egypt with 10,000 of his own men in exchange for their assistance.

The crusade’s leaders confirmed the agreement, which was not received positively by all; many crusaders and pilgrims grew disillusioned by the prospect of fighting their fellow Christians and deserted the campaign.

When the crusader fleet reached the walls of Constantinople in June 1203, Prince Alexius did not receive the warm welcome from the people of city he had expected; the gates were locked and the crusaders had to breach the walls and enthrone him themselves. For a short period he and his father ruled as co-emperors, but Alexius, no longer needing the support of his erstwhile crusader allies and realising that the Byzantine treasury was bare, reneged on his promise.

Alexius reneged on his promises, prompting the second siege of Constantinople and the brutal sacking of the city by the crusaders

A popular uprising in the city ultimately toppled him and his father died soon after, leaving no one who would negotiate with the crusaders who remained outside the walls awaiting payment. On 9th April 1204, the crusaders began their second siege of Constantinople. After entering, they brutally sacked the city of its wealth for three days, massacring and abusing the inhabitants and even desecrating the Hagia Sophia, then the largest church in Europe.

Following their occupation, the crusaders established the Latin Empire of Constantinople, with the Venetians dominating the larger part of the city and taking the Hagia Sophia as a Catholic Cathedral for themselves and the French crusaders taking the smaller portion. The two also divided the Byzantine Empire’s island (Crete), and Balkan and Greek territories amongst themselves. In May, Count Baldwin of Flanders was elected as the new emperor and became the first Roman Catholic to ascend Constantinople’s throne.

For their part, the Byzantines who had just lost their capital were then chiefly confined to Anatolia for the remainder of the Latin Empire’s existence, until 1261. On the 25th of July that year, the Byzantine army returned to Constantinople from exile under the command of Emperor Michael VIII causing the crusaders to flee. Re-establishing the city as the seat of the Byzantine Empire, Michael arrived in the city in person in August and was crowned with his wife in the Hagia Sophia.