The third and final instalment of the British Turkish Cypriot Association’s ‘What is the future for Cyprus’ debate brings together five major speakers.

The event evening is being televised live on BRT and Zoom on Wednesday, 24 March.

Former UK Government Minister Brooks Newmark will again host the ‘Question Time’ style debate, which takes place in the run-up to the 5 +1 UN Cyprus Summit in Geneva that starts on 27 April 2021.

Among the topical questions Newmark will be posing to the panel are: “What are their views on Europe’s longest standing dispute?”, “What should we expect from the Geneva Summit?”, and “Is it time for Britain to end its embargoes on Turkish Cypriots?”

Jack Straw was Foreign Secretary during the time of the UN-backed Annan Plan referendum. He worked closely with the UK’s Special Representative Lord David Hannay in the years leading up to the referendum, which aimed to secure a permanent settlement that would reunite the two sides in Cyprus.

In January 2006, Straw visited Cyprus meeting the leaders of both sides, before heading to Ankara where he stressed that “both the European Union and Turkey have responsibilities they must fulfil in regard of Cyprus: Turkey to apply the Ankara Protocol fully to all member states and to normalise relations with them as soon as possible; we to find a way of ending the isolation of the Turkish Cypriots and for them to trade with the rest of the European Union.”

Fifteen years on, the island is still divided, Turkey does not have official relations with Greek South Cyprus, and the Turkish Cypriots remain embargoed by the EU, the UK and others.

On the fifteenth anniversary of the Annan Plan referendum in April 2019, Olgun told T-VINE: “Many of us knew that there would be a ‘No’ vote from the Greek Cypriot side, although the international community was expecting a ‘Yes’ because they had been deceived… For me it wasn’t a surprise and not for the President [Rauf Denktaş] either.”

Reviewing the state of the affairs in Cyprus in the same article, Olgun said:

He sees the hydrocarbon resources issue as the trigger for the permanent separation of the two sides, and for the international community to end up supporting a 2-state solution, because there is “a need for international companies to operate in a peaceful environment,” adding the TRNC recognition is going to happen “by default”, Olgun said in 2019.

“The Turkish Cypriot side and Turkey are going to establish and start their own hydrocarbon exploration activities in their own areas… This is going to lead eventually, by default, to full separation of the two sides.”

Olgun has served as Chief Negotiator for former TRNC Presidents Rauf Denktaş and Derviş Eroğlu. His experience at the Cyprus negotiating table is second to none, a major factor in why newly elected President Tatar appointed Olgun as his Special Representative to drive his 2-state solution forward.

A regular current affairs pundit on television, Prof. Hasan Ünal is one of Turkey’s foremost experts on Cyprus, having written and taught about the island’s conflict for more than thirty years.

The Turkish academic’s knowledge of the Balkans, Middle East, Russia and Central Asia makes him well-placed to discuss how TRNC recognition compares to other nations’ bids for statehood, including Kosovo and Palestine, and on how tensions in the Eastern Mediterranean and competing national interests could impact the outcome of the Cyprus dispute. 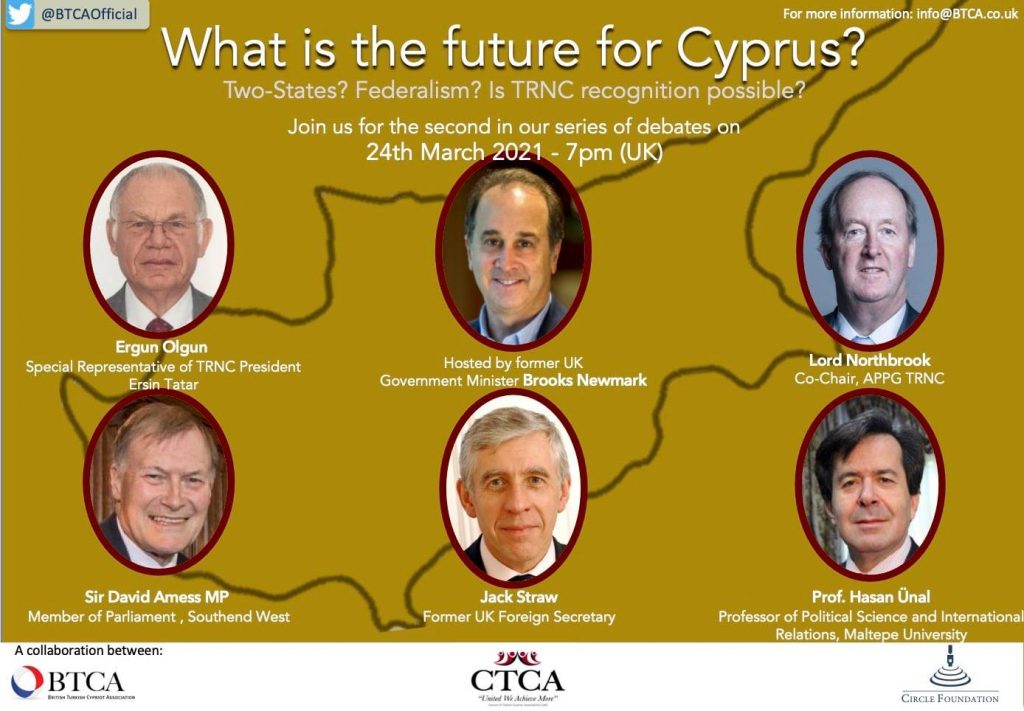 Title: What is the Future for Cyprus?

Where to watch: the webinar will be broadcast via Zoom. Click here to register online. Viewers on Turksat can also watch the broadcast live with simultaneous Turkish translation on TRNC state broadcaster BRT 1. Organisers are waiting are hoping Turkish Cypriot channel Kanal T will again be broadcasting the programme in English.

From 2007 to 2010 he served as Lord High Chancellor of Great Britain and the Secretary of State for Justice throughout the Brown Government. Jack Straw is one of only three individuals to have served in Cabinet continuously during the Labour governments from 1997 to 2010.

He was a member of the European Council for five years. In 2005 he led successful efforts to open formal EU membership negotiations with Turkey. He is co-Chairman of the government-sponsored British-Turkish Forum. Straw was given the Order of the Republic of Turkey by President Abdullah Gül in 2012.

Jack Straw wrote in 2017, “In one of its worst strategic decisions ever, the European Union (sadly, with UK acquiescence) had agreed that Cyprus should join the EU on 1 May 2004, whether agreement had been reached with the Turkish Cypriots or not, Only a partitioned island will bring the dispute between Turkish and Greek Cypriots to an end.”

Mustafa Ergün Olgun was born in Nicosia, Cyprus and studied Governance. He worked both in the public and private sectors, as well UNDP as a contract consultant.

He served as Political Advisor at the TRNC Presidency from 1993 to 1998 and was appointed its Undersecretary from 1998 to 2005. He headed the Turkish Cypriot Technical Committees, which negotiated the 2004 UN Comprehensive Settlement Plan.

He is currently the Special Representative of TRNC President Ersin Tatar for the negotiations aimed at resolving the Cyprus issue.

He sits on the Board of the International Council for Middle East Studies in Washington D.C. and has just finished a book on Cyprus settlement talks.

Lord Northbrook is a Conservative Peer. He took his seat in the House of Lords in 1990, and served  as an Opposition Whip from 1999 to 2000. He speaks on treasury, constitutional, and agricultural matters.

He is now a founding trustee of the Fortune Forum Charity which in its first year raised over £1 million for Global Poverty, Global Health, and Climate Change Charities with ex-President Bill Clinton as guest speaker at its first event in 2006. Al Gore, Nobel Prize winner and former Vice President of the United States, spoke at their second event at the end of November 2007.

He is a Member of the Advisory Board of the Iman Foundation which aims to promote dialogue to strengthen international understanding and co-existence through the exchange of ideas, people, culture and religion.

Lord Northbrook recently told T-VINE, “I believe that the bi-federal, bi-communal solution is dead after the failure of the Crans Montana talks,” adding that he was “supportive of the new President’s idea of a Two State solution.”

Sir David has been a Conservative Member of Parliament for 37 years. He stood in the Labour stronghold of Newham North West in 1979, before winning the Basildon seat from Labour in 1983. When his seat was broken up in a boundary review, he was elected to Southend West in 1997.

He was briefly Parliamentary Private Secretary to Edwina Currie, then to Lord Skelmersdale, and for nine years to Michael Portillo through most of his Ministerial career.

He has sponsored a large number of Private Members’ Bills. In 1999 he was successful with a Bill to create a programme of action for home heating and the reduction of fuel poverty, which became the Warm Homes Act 2000. He was a member of the Health Select Committee for ten years.

Sir David is a member of the Speaker’s Panel of Chairs and the Fire Safety Committee. He is Chair of a number of APPGs including Maternity, Liver Health, Endometriosis and Fire Safety & Rescue.

He has shown a keen interest in the British Turkish Cypriot community in recent years. In 2014, he hosted a British, Turkish and Turkish Cypriot business networking event at the Houses of Parliament, attended by a number of British MPs and many business people.

Sir David was also a guest at the inaugural CTCA Awards in 2017, honouring Britain’s high-achieving Turkish Cypriots, where he presented several of the big awards on the night.

Professor Hasan Ünal is one of Turkey’s most highly regarded international relations experts, specialising in Cyprus and the Eastern Mediterranean, Central Asia and Southeast Europe.

He regularly contributes to current affairs debates on national and international media about Turkish foreign policy, and regional developments. He has been quoted in major global media outlets including Reuters, AFP, Sputnik, and Xinhua News International.

Prof. Ünal is the author of multiple published works covering contemporary and historical issues, ranging from the Cyprus Question, to the Balkans, the Middle East, the Ottoman Empire, and Turkey’s regional role and relations with neighbours.

He has taught international relations at several leading universities in the Turkish capital Ankara: Bilkent, Gazi and Atılım. In 2018, Prof. Ünal moved to Istanbul to take up a position in the Political Science and International Relations Department at Maltepe University.

Prof. Ünal is also a part-time lecturer at North Cyprus’ Girne American University (ongoing since 2009), and has also been a visiting lecturer the Azerbaijan Diplomatic Academy in Baku, and L. N. Gumilyov Eurasian National University, in Astana, Kazakhstan.

He is fluent in English and he has the working knowledge of French and Greek, and is currently learning Russian.

Catch up with previous ‘What is the future for Cyprus’ webinar

Click below to watch the first two BTCA webinars about

Webinar 1: Debate 1: What is the Future of Cyprus?

Webinar 2: Debate 2: What is the Future of Cyprus