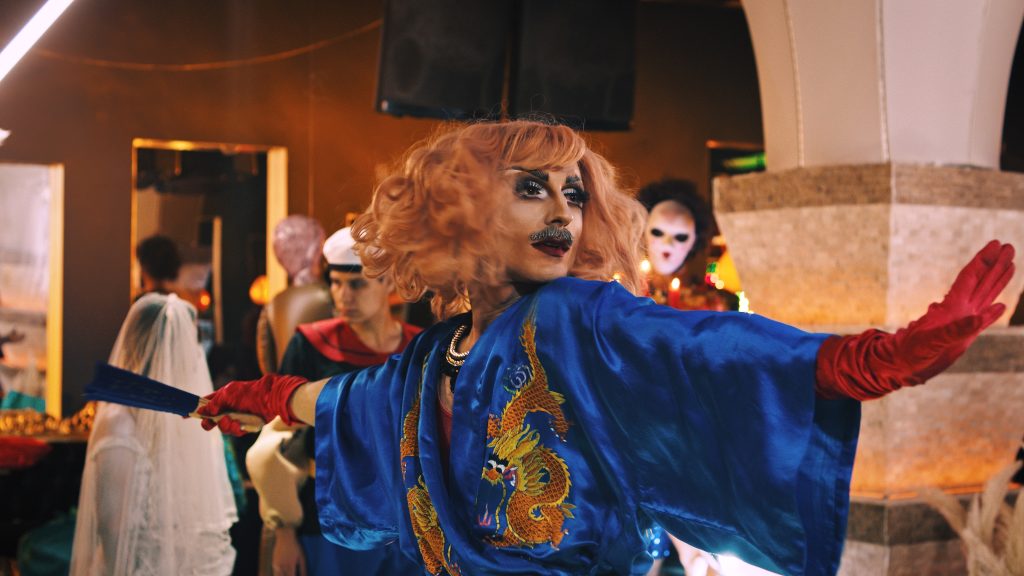 This short sci-fi comedy was the most entertaining film at the recent Taste of Anatolia – Films From Turkey 2022 film festival, and got a good laugh out of me for its ending!

Kika, a drag queen, enters this virtual hedonistic club game called ‘Free Fun’ where everyone, both players and non-player characters (NPCs), are in extravagant costumes having the time of their lives.

Kika seems like a regular here and heads to the ‘Sex Room’, but initially gets turned away by the bouncer who states that the only way to enter is by winning a fight match.

A sequence of a Street Fighter style match takes place, with Kika and their opponent putting on their best Vogue and martial arts moves on stage. After winning all rounds in final ‘boss’ fashion, Kika enters the ‘Sex Room’ where everyone is having some type of sexual intercourse.

Removing their Virtual Reality (VR) headset and leaving their avatar ‘Kika’ in the metaverse, the actual protagonist is then shown sat on their bed in casual clothing – a complete contrast to their virtual alter ego.

‘Kika’ goes to have lunch with their family and can’t help but stare incredulously at their dad, who is a typically Turkish dad, wearing his undershirt and sweatpants, eating the karnıyarık (aubergine stuffed with mince) his wife just cooked.

The strong ending really takes you out, because seeing your own parent like that must be a scarring memory you just can’t wipe from your memory no matter how many gallons of holy water you wash your eyes with.

The fact that they’re eating karnıyarık too, a popular Turkish dish, in the final scene is surely a deliberately mischievous and somewhat naughty piece of symbolism from the director. Peak comedy. And peak also because the comedy doesn’t kick in until the very last scene, which wraps up the film in the best way possible.

Some shorts can feel really drawn out, and some just leave you wanting more, but Free Fun was the perfect length with a highly satisfying ending.

Written and directed by Turkish Cypriot filmmaker Fehmi Öztürk, Free Fun is his debut film and is reminiscent of Black Mirror’s “Striking Vipers” episode, which also focuses on a VR fighting game with a LGBTQ+ theme.

The protagonist’s true self as Kika versus their dimmed down alter ego around their family, appropriate for the conservative society they live in, takes the spotlight. We find out that, ironically, those same social expectations apply to Kika’s dad, as he finds freedom in the VR world himself.

A cool video game element was that each player had a profile info with quirky special powers, usernames and physical appearance customisation.

What’s really mind-blowing is that the production from start to finish only took around 20 days, including the preparation of those glorious costumes – so props to Fehmi Öztürk and his team!