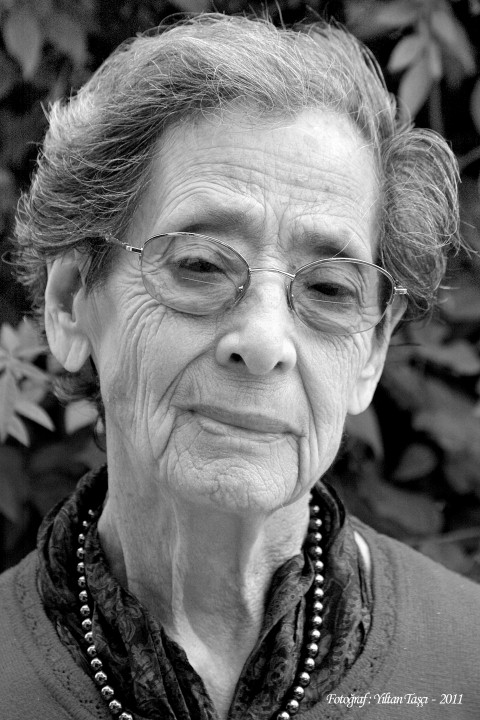 Kamran Aziz, one of the most significant Turkish Cypriot personalities of the past century, has died aged 95. She had been unwell for some time, receiving treatment at Lefkoşa Dr. Burhan Nalbantoğlu Hospita and was discharged yesterday. She passed away at her home in the early hours of this morning.

She challenged convention at a time when most women struggled to get even a basic education. And by daring to be different, she broke multiple barriers and created new opportunities for the Turkish Cypriot women that followed.

Born in Cyprus in 1922, Kamran Hanım came from a medical family: her father was Dr. Mehmet Aziz, credited with eradicating malaria in Cyprus, and her elder sister, Türkan Aziz, was the island’s first head nurse.

She was schooled at the American Academy, Nicosia, and went on to study pharmacology. She graduated in 1944 and, along with Ayşe Dan, became the first Turkish Cypriot female pharmacist. Within three years, she had opened her own chemist – Aziz Pharmacy – and in 1959, was one of the co-founders of the Turkish Cypriot Union of Pharmacists.

She was the driving force behind North Cyprus’ first pharmaceutical warehouse, enabling easier access to medication and eliminating the perennial problem of supply shortages. Although her initial attempt failed, by 1988 she had established the Güç Warehouse, a private-public partnership between the state and individual pharmacists.

Kamran Hanım gave the warehouse its name (Güç / Strength) and served on its board of directors until 1997. In the same year, she also retired as a professional pharmacist. Fourteen years later, in 2011 a local museum of pharmacology opened inspired by her life and work.

Music remained a lifetime passion for Kamran Aziz. Her musical education started at the age of 8, when she learnt how to play the piano. She took composition and singing lessons at the American Music Academy and later the London School of Music, passing all her exams.

A trailblazer in every sense of the word, Kamran Aziz started making musical broadcasts on the British Military Radio in 1945. In the same year she and her friend Jale Derviş started translating Western classical compositions into Turkish – years before similar translations were made in Turkey. Their renditions helped reshape the musical tastes of Turkish Cypriots, popularising classical music, tangos, waltzes and marches.

In 1950, she founded her own a musical ensemble – Kamran Aziz ve Arkadaşları (‘Kamran Aziz and her Friends’) with Jale Derviş, Zeki Taner, Fikret Özgün, Vecihi Turgay and Ahmet Anlar. They became the first Cypriot group specialising in Western music, performing first on radio and later on television for the Cyprus Broadcasting Corporation, continuing as an ensemble until 1963. They played popular folk songs, as well as Turkish translations of operas and of works by classical composers such as Schubert.

The enduring appeal of her body of work is reflected by the central role it continues to occupy within Turkish Cypriot folk music, regularly performed by today’s artists, such as Turkish Cypriot opera singer Laden İnce, whose recent international tour included the world debut of Al Yemeni Mor Yemeni.

In February 2008, aged 86, she was honoured for her contributions to music with a special award by the TRNC Parliament’s Cultural Committee. She was presented with the award at her home by the TRNC Speaker of Parliament Fatma Ekenoğlu, who was accompanied by committee members Dr. Arif Albayrak  MP (CTP-BG) and Kemal Dürüst MP (UBP).

“I am very sad to learn of the death of Kamran Aziz Hanım – an important figure for Turkish Cypriot society.”

“Through ‘Kıbrısım’, ‘Al Yemeni, Mor Yemeni’, and many other compositions Kamran Aziz will live on forever in our language and in our hearts. May God rest her soul, my deepest condolences also to her relatives and to our entire nation.”