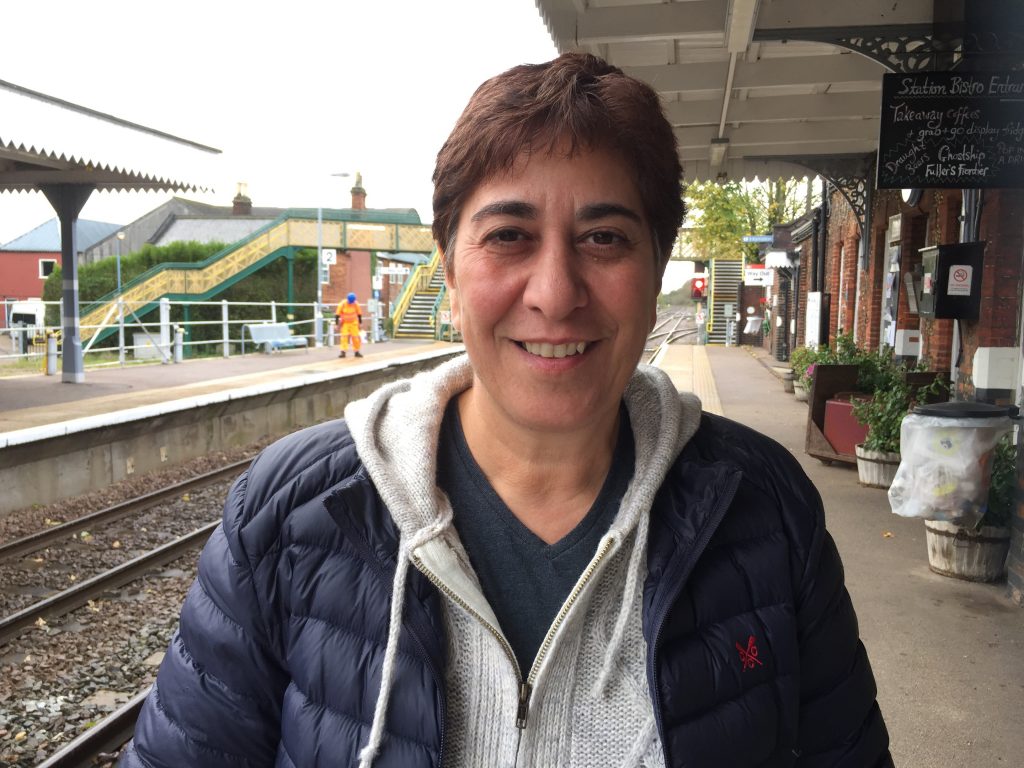 Many London Turks will be familiar with the name Suzanne Nuri. For years, she was the editor of London Turkish Gazette putting the spotlight on news and issues affecting the community. Several years ago she relocated to Wymondham (pronounced ‘Windum’), a delightful and historic small town in Norfolk in the East of England.

This Thursday, she is standing as a Liberal Democrat candidate in a by-election for the local Tory-dominated Council in what is likely to be a closely contested vote. Suzanne stood in the 2015 Local Elections, where she narrowly lost by just 37 votes.

T-VINE caught up with Suzanne on the campaign trail to ask about her new life, which issues the residents of Wymondham are raising with her on the doorstep, and what she hopes to achieve if elected as a local councillor.

Tell us about Wymondham

Wymondham is a pretty little town approximately 8 miles south of Norwich. The population is about 15,000 and growing due to new homes being built in the area. We have a 900-year-old abbey which draws tourists.

We have lovely countryside on our doorstep, amazing Norfolk skies, and a quiet pace of life.

The Ketts Rebellion of 1549 began here. Two brothers, Robert and William Kett, rallied 20,000 people to their cause against the enclosing of public land by wealthy landowners. They travelled to Norwich where the King’s men defeated them and the brothers were eventually executed.

More recently Wymondham is home to Lotus Cars. The town has a vibrant community with many groups, including a ukulele group, fire, air and police cadets, and a rugby and footie team. We have a picturesque heritage railway station, as well as a mainline regular one.

Wymondham also has a lovely square with a listed Market Cross building in the centre. Next summer will see a special mobile app launched in the town, specifically geared at tourists.

For those that don’t know you, tell us a bit about yourself

A Londoner all my life, I never thought I’d live anywhere else, not least in a little market town! I was a journalist and editor at the London Turkish Gazette. I have worked in health and safety, in the family fish and chips business, and as a clerk to school governing bodies in Waltham Forest. I have two amazing daughters, and recently married Lucy (after this election I will be Suzanne Nixon).

I currently work as a freelance graphic designer a few days of the month in Stalham North Norfolk.

How long have you lived in the town and how have you got to know your local community?

I’ve lived in Wymondham since 2013. I am part of Town Team, a voluntary group which regular hosts community events such as our popular Vintage Day (see Wymondham Town Team Facebook page for an idea of what we do). I’m also a Wymondham Business Group director and if elected, would seek to improve our weekly market with promotion.

In the past I have been a campaigner to stop the removal of play equipment from King’s Head Meadow, a popular green space, and have been active in our local Liberal Democrat Party since 2014. I am a supporter of Wymondham Access Group, which seeks to make our historic town more accessible for the disabled and those with mobility issues.

Wymondham Town Council comes under the jurisdiction of South Norfolk District Council. We have 15 councillors representing various wards in the town. There is one Liberal Democrat (my friend and colleague Julian Halls), one Labour and the rest Tories.

Why has this by-election been called and who’s standing?

There are two others besides me: Martin Lemon (Conservative) and James Leman (Labour). Both have appeared at the last moment, but seem to have no link to the local community. Lemon’s literature so far is very vague and Leman’s features an issue which has been resolved (flooding under the railway bridge) and an inaccuracy with the name of a controversial play area.

The last local elections were in 2015, the same day as the General Election, which saw people punishing the Liberal Democrats up and down the country for being the junior partner in the coalition government. I stood then too, and lost out on being elected by 37 votes. It feels very different this time around; people are much more receptive to the Lib Dems.

What are the main issues on the doorstep and what are you planning to do about it if elected?

The biggest is housing over-development without the infrastructure to support it. Schools are oversubscribed, and there’s a lack of medical provision and shops in outlying areas.

Also a lack of access to the A11, which means hundreds of households have to squeeze under a railway bridge that is too small for the current capacity, to reach the A11 – the gateway to Norwich and beyond.

Another issue is the lack of access to Platform 2 at Wymondham train station. It currently involves negotiating two flights of steps, impossible for wheelchair users, parents with buggies, and those with suitcases or elderly who all struggle with the steps. Platform 2 trains go direct to Cambridge and Ely so this affects lots of local people.

With two Lib Dem councillors, we would provide more opposition to the Tory-led Town, District and County Councils and draw attention to these important issues. Currently they simply rubber-stamp decisions. We want them to be more accountable and properly represent the interests of Wymondham.

Why the Lib Dems and why do you want to be a local councillor?

My political views evolved over time and I realised I could no longer support the party I used to vote for. For me, I find the Liberal Democrats allow for much more freedom than the Tory and Labour parties in terms of beliefs, and are less tribal. They draw people willing to work together for progressive goals, while allowing for open discussion and are tolerant of people with differing views.

The fact they introduced the Equal Marriage Act (Lib Dem Baroness Lynne Featherstone was the architect), which enabled me to marry Lucy, is a huge thing personally to us both.

I want to be a councillor because Wymondham’s potential is not being met by a council unwilling to adapt to a rapidly changing area. Decisions are made almost in secrecy and residents are ill-informed. Communication is poor, resulting in controversial decisions which have divided the town.

There is no effective opposition resulting in poor democracy at this basic level. I genuinely care about where I live and I want it to be a beacon for others to follow.

British Turks are, in the main, regarded as an apathetic community. What galvanised you to enter into politics?

Politics has changed so much in the past two years, more than in the previous 20 years or so. What we believed that the main parties stood for has changed. For example the Tories no longer stand for small business. And you have to question if Labour, by allowing Brexit without scrutiny and without a clear plan, have the interests of ordinary workers at heart.

Whether you voted for or against Brexit, there is no denying these are uncertain times for this country.

I believe as British Turks and Turkish Cypriots we should play a full and proper part in decision making, policy making and representing our communities, whether in a world city like London or a small market town in Norfolk. And let’s not forget that the first female British Turk in Parliament is Liberal Democrat Baroness Meral Hussein-Ece, a huge inspiration.

My message would be to really think about which party represents you best, who really appeals.  Do your homework, find out what the parties are saying. Base your decision on facts, not ‘fake news’.

Raise your voice, stand up and be heard because the time to do this is now.