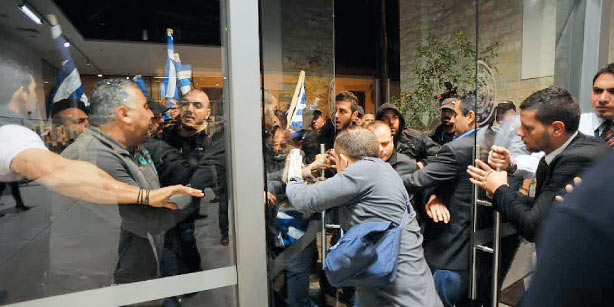 Former Turkish Cypriot President Mehmet Ali Talat was again targeted by far-right nationalists in South Cyprus. The incident took place on Wednesday evening during a conference in Limasol where Talat was part of a panel of speakers discussing the benefits of a unitedCyprus.

On March 26, several hundred ELAM (National Popular Front) supporters – the Cypriot equivalent of Greece’s neo-Nazi Golden Dawn party – tried to disrupt the conference that was also being attended by the US ambassador to Cyprus, and senior officials from the Greek Cypriot government and the European Commission.

Although being forewarned, only two or three police were on hand to deal with the protests and were completely outnumbered by the far-right extremists. According to eye-witness reports, the protesters jeered, threatened and physically jostled those trying to get into the building – many were too intimidated to gain access and left. ELAM supporters then started banging on the doors, which could be heard inside, before forcing their way into the hall outside the conference room. They unfurled Greek flags, and threw eggs, fruit and a flare at those inside, creating panic in the room.

The incident was initially contained by the American ambassador’s bodyguards, who managed to hold the protestors at bay until the police arrived. The conference continued, with Talat remaining calm throughout, even when the protesters had managed to cut off the building’s power supply. After the event, Talat and his team were given a police escort to the Green Line. It is unclear if any arrests have been made.

Following the attack, the Greek Cypriot leader Nicos Anastasiades called Talat to apologise, promising a full investigation and a guarantee that future events in South Cyprus would be properly policed. On 19 February, a smaller group of ELAM supporters had also tried to disrupt a conference at the Neapolis University in Baf (Paphos) where Talat was speaking. Their efforts to storm the building had been thwarted by university security.

In a statement posted on his Facebook page yesterday, Mehmet Ali Talat said,“We have started on the road to peace. As we work towards a solution to theCyprus Problem and for a culture of peace to prevail, it is natural we will face such unpleasant protests. Given the circumstances, it would be strange if we did not face this.”

He went on to say the protesters do not represent all Greek Cypriots and asked that people do not permit these small groups of fanatics to adversely impact on the negotiations or the peace process. Talat said speculation that the Greek Cypriot police had failed to take measures to avoid such an incident was true, but he had been reassured by Nicos Anastasiades that all necessary precautions would be taken in future.