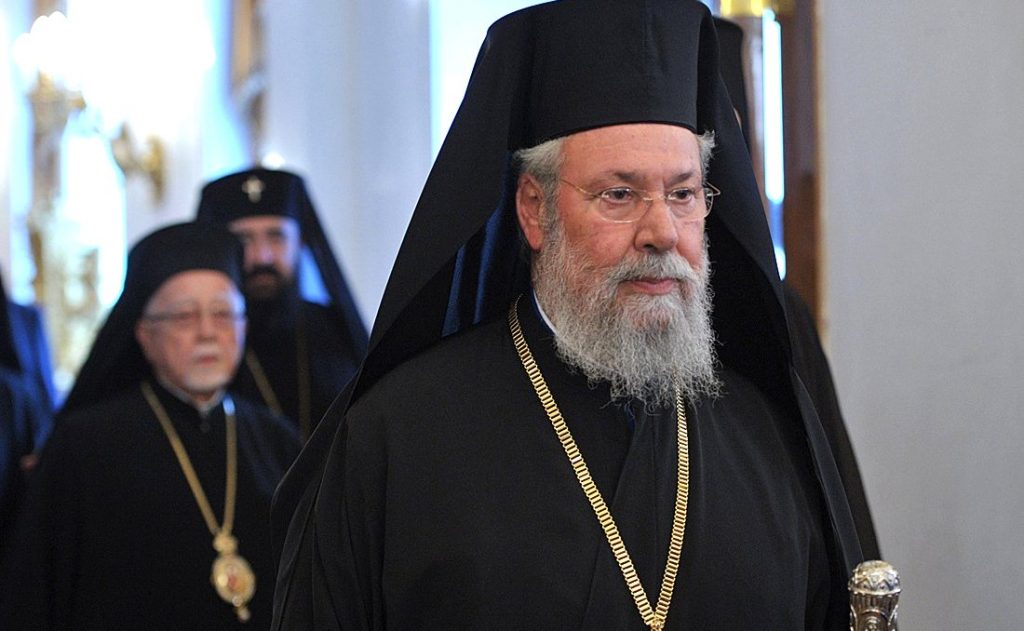 The head of the Greek Orthodox Church in Cyprus courted controversy when he issued an anti-gay, anti-abortion, anti-Turkey, anti-TRNC Easter message, which also condemned Greek Cypriots who went shopping in North Cyprus and used Ercan airport.

The diatribe by Archbishop Chrysostomos II, which sparked a storm of protest on social media, was issued on Easter Sunday – 28 April in the Orthodox calendar – and read out in churches across South Cyprus, according to a report by the English-language Cyprus Mail.

In it he slammed Greek Cypriots who crossed to the Turkish Republic of Northern Cyprus (TRNC) “not to visit churches and the graves of their ancestors but to do transactions with the occupation, for fun, for the use of the illegal airport”.

He likened such “moral deviation” to the “deconstruction of the people’s morality through the introduction of legislation on abortions, gender choice and the cohabitation of same sex-persons among other things”, the report said.

“In no way can a moral deviation constitute progress or modernisation, just as the Turkish invasion cannot be characterised as a peace operation,” he added.

The comments brought a stinging rebuke from the TRNC’s Ministry of Foreign Affairs, which said his words demonstrated a “clear reflection of a medieval approach and mindset”.

“We would like to call on to the Greek Cypriot administration once again at this point; condemn these statements exacerbating the existing lack of trust between the parties and give a peaceful and cooperative message to the Greek Cypriot community, instead of one distancing the two peoples from each other,” the statement said.

It is not the first time, however, that Archbishop Chrysostomos II, 78, has been accused of bigotry.

In May 2017 he was accused of racism when he described people from Turkey living in North Cyprus since 1974 as “uncouth” and said that they should be deported as part of a political settlement.

“Anatolians” could “never become European, not even in 100 years”, he said, adding that they would “spawn a dozen children per family” if they were allowed to stay.

The Archbishop was cleared of hate speech, however, by the South’s Attorney-General Costas Clerides after a complaint was lodged by anti-racism group Kisa.

They had claimed the remarks amounted to “incitement to xenophobia, racism, Islamophobia and incitement to racial hatred against Turks or Turkish Cypriots”.

While the Archbishop’s comments towards Turks were “intense”, they were not directed at a “particular group based on their ethnic background or religion” Clerides said at the time.

A report by the European Commission against Racism and Intolerance (ECRI), published in June 2016, referred to a TV interview in which the Archbishop openly admitted to supporting the causes of the National Popular Front (ELAM), which the ECRI said promotes an “anti-Semitic, anti-Turkish Cypriot, racist and xenophobic agenda and is believed to be responsible for attacks on Turkish Cypriots and migrants”.

The report also singled out the Orthodox Church of Cyprus for its “clear anti-LGBT [lesbian, gay, bisexual, and transgender] stance on various occasions”.

It referred to a meeting of the Council of the Heads of the Christian Orthodox Church, held in Istanbul in March 2014, where the Archbishop urged all Orthodox Churches to “condemn homosexuality” and stated that governments demonstrated “weakening moral integrity” by giving equal rights to LGBT people.

In 2016 Archbishop Chrysostomos II provoked a further backlash from LGBT groups when he said that homosexuality was a “sin” and “unnatural”.

He has also caused offence to black people, saying in 2012 that he would “even back a black man if we had the same views” when asked if he would support a left-wing candidate in the run-up to the 2013 presidential elections in South Cyprus.

In 2007, just months after he had been chosen as the new Archbishop, Chrysostomos II revealed that he had been behind a campaign warning Greek Cypriot voters that they would “not go to heaven” if they backed the 2004 Annan Plan to unite Cyprus.

Only one in four Greek Cypriots said “Yes” to the settlement blueprint.

The public outbursts by Archbishop Chrysostomos II are in stark contrast to the messages of peace and reconciliation that he has put his name to as part of joint statements from the religious leaders of Cyprus.

One, issued by the Office of the Religious Track of the Cyprus Peace Process in June 2017, ahead of the ill-fated Cyprus summit in Crans-Montana, Switzerland, said: “There is no alternative to communication, co-operation and co-existence to ensure that Cyprus becomes a haven of peace with justice where religion will no longer be a victim of a political conflict; where Greeks, Turks, Armenians, Maronites, Latins, Christians, Muslims and people of other faiths will live, work and worship side by side in total freedom and harmony.”

In March 2017 Archbishop Chrysostomos II attended a ceremony in the United Nations buffer zone where he and the island’s other religious leaders presented a joint statement condemning violence against females.

“We… are deeply concerned that violence against women and girls continues to be one of the most pervasive manifestations of discrimination against women in Cyprus,” the statement said.

But there was no mention whatsoever in the Archbishop’s Easter message this year of the shocking killings of five migrant women and two girls, which a Greek Cypriot army officer had confessed to committing earlier in April.

Main picture top, Archbishop of New Justiniana and all of Cyprus Chrysostomos II, before the start of the meeting with representatives of the local Orthodox churches in Russia, 25 July 2013. Photo © Kremlin, by CC 3.0 licence