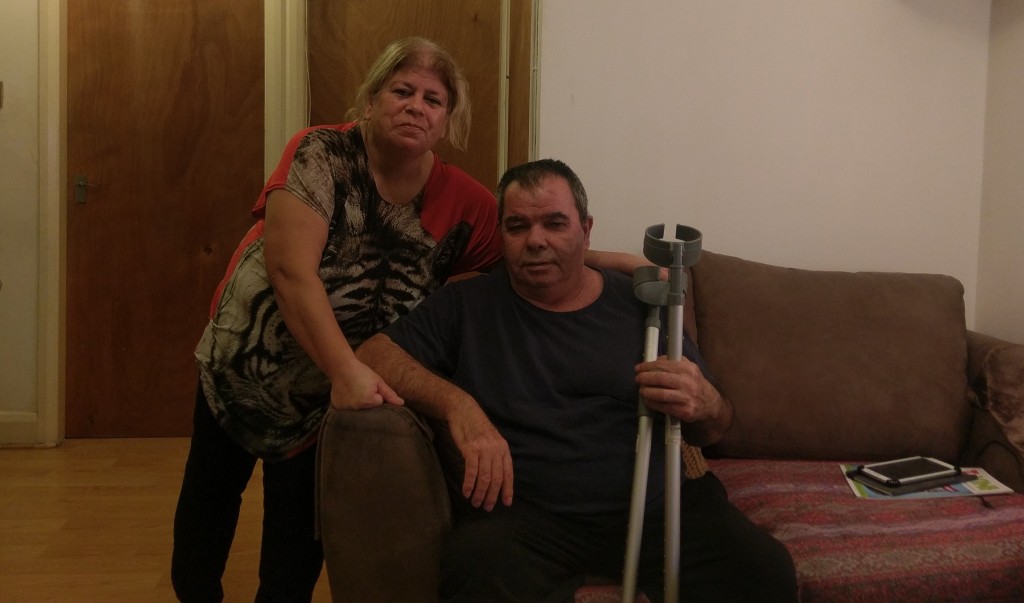 After a lengthy battle to get re-housed, Soner Sabriler’s case has received a welcome boost. The 62-year-old Turkish Cypriot suffers from crippling back problems that has left him with severe mobility problems and a virtual prisoner in his own home.

He currently lives in a small, 2-bedroom, first-floor flat off Green Lanes, Harringay, with his wife and 16-year-old daughter. Seven major surgeries on his spine have failed to alleviate his back problems and acute pain – for which he is prescribed morphine – leaving him unable to stand or walk unaided.

The wheelchair user cannot make his own way up and down the two flights of stairs that link his flat to the building front door, leaving the father-of-one stuck indoors for days on end. His situation is compounded by the fact that Haringey Council is unable to make major adaptations to the building, as he is a private tenant and does not own his home.

In 2014, he asked the council to re-house him due to his situation. His case was backed by local and hospital doctors and local MP. However, due to a chronic shortage of social housing in his borough and the unwillingness of council’s independent medical advisors to give him priority status, he was forced to remain trapped in his existing home.

In their letter dated 10 Dec. 2015, the council informed the family that after reviewing the available information, Mr Sabriler’s housing needs was assessed as Band C – the lowest priority group. Haringey Council owns 16,000 properties and has 8,500 on its waiting list, but with just 400 properties becoming available each year, the prospect of re-housing for a category C applicant is nigh on impossible.

Things started to change after Kibris Genc TV and T-VINE brought the Sabrilers’ plight to light last December. The media attention helped alert Mr Sabriler’s local councillors Emine Ibrahim and Zena Brabazon to his predicament, who have supported him in getting re-assessed.

Independent medical advisors re-visited Mr Sabriler’s home in the New Year and their recommendations led to important adjustments to the flat, to ease his mobility while indoors. Six months late, the family were informed their housing status had been upgraded to Band B. A letter from Homes for Haringey dated 1 June 2017 said they acknowledged “the deterioration in his mobility and difficulty on the stairs”, which means “Serious Medical Priority applies”.

The family were overjoyed with the news. Mr Sabriler told T-VINE: “It’s a big relief. It’s been a living hell for me and my family these past few years, and it really depressed me that my local council failed to see how ill I am.”

He added, “I’m grateful to everyone who’s helped push for the change in my housing status. I’m desperate to be re-housed to a ground floor flat or one with a lift, so I can regain some independence. I just want to be able to go outside and see natural sunlight and get fresh air, instead of being trapped indoors for days and days. It’s a horrible existence.”

Sadly, even with his priority upgraded, it’s not clear when Mr Sabriler will be re-housed. Sophie Hoskins, a spokesperson for Haringey Council, previously informed T-VINE that the council’s Housing Department, like others across the capital, was facing a severe crisis. With the cost of private rent soaring, the huge numbers of people seeking social housing and the limited stock meant waiting lists remain overwhelmed.

Had Mr Sabriler lived on his own or with just his wife, he would have a good chance of being re-housed in the borough within the next 12 months. However, according to the council’s own lists, suitable 2-bedroom properties in the borough are far harder to come by, with those in Bands A and B still facing an average wait of seven years.