Hubris, nemesis and lies – Cyprus and the downfall of the Greek Cypriots in 1974 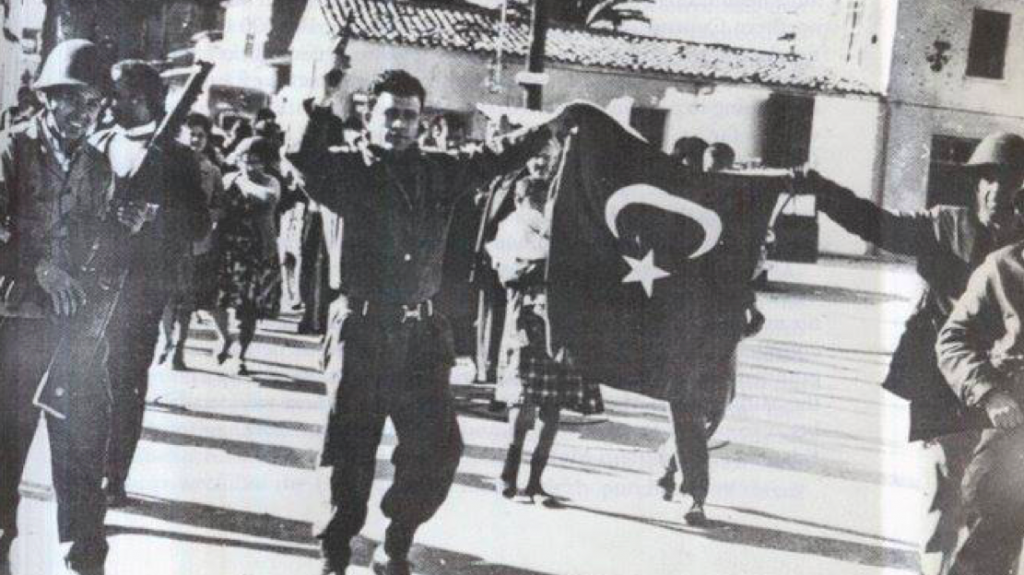 Everyone in Cyprus knows that the Turks intervened in Cyprus in July 1974. However, thanks to clever, well-funded and unremitting Greek propaganda, the world has been led to believe that this was nothing less than a brutal and uncalled-for invasion against the peace-loving Greeks; an Ottoman jackboot to seize Greek land and occupy Cyprus.

Nothing could be further from the truth. But for once the victors have not written the true story of events. Thanks to Turkish Cypriot laziness, incompetence and a refusal to see the PR importance of explaining what really happened, the Greek Cypriots’ mendacious version of events is the one that has found its way into the history books.

The true story is very simple. On 15 July 1974 the Greek army and fascist Greek Cypriot gangs mounted a coup to overthrow and murder their president. A panic-stricken Makarios fled in his socks to be rescued by the British and flown to safety. An EOKA thug and admitted murderer called Nicos Sampson (pictured above parading with a captured Turkish flag and his paramilitary troops) became Cyprus’ new ruler.

On the 19th Makarios addressed the UN Security Council in New York and denounced a Greek invasion. Next day the Turkish army intervened – quite legally – as a guarantor of the1960 Cyprus Constitution. The British forces on the island were ordered to sit tight and become mere spectators; not Whitehall’s finest hour.

In 1976 the UK House of Commons found that Turkey had proposed joint Anglo-Turkish action under the Treaty of Guarantee. However the then Labour Government in Britain refused to help. They argued that Britain was under no duty to act, even though Article II provided that Britain would guarantee the state of affairs established by the 1960 Constitution.

The Parliamentary Committee concluded that “Britain had a legal right to intervene; she had a moral obligation to intervene. She did not intervene for reasons which the Government refuses to give.”

One of the other inexplicable mysteries of the whole affair is the extraordinary stupidity of the Greek military junta in Athens not to think through the inevitable consequences of their actions on Cyprus in 1974. A bloody civil war among the Greeks and attacks on Turkish Cypriots gave Ankara the excuse to move into Cyprus that Turkey had been seeking for years.

The Greek word, ‘hubris’ springs to mind, meaning excessive pride, arrogance and defiance of the Gods. However, hubris is inevitably followed by ‘nemesis,’ or retributive justice from the vengeful Gods, to bring about the downfall of the over-ambitious. Nemesis was to strike the new Greek Cypriot regime a fatal blow.

The Greek Cypriot National Guard and their Greek allies made things worse by making a monumental strategic blunder. One of the principles of war is ‘concentration of force.’ The GCNG should have sealed off the Turkish beachhead in the north and counter attacked. Instead, blinded by a determination to wipe out the hated Turkish minority once and for all, they spread their forces all over the island in a muddled attempt to crush the widespread Turkish Cypriot armed enclaves. The notorious Akritas Plan, to ethnically cleanse Cyprus of Turks, became the Greeks’ ruinous priority.

This dispersal of effort failed. Turkish forces broke out of the beachhead and parachute and helicopter infantry were flown in. Outgunned, outnumbered, out-manoeuvred and, critically, lacking air superiority, the Greeks fell back and on 22 July the UN Security Council was able to broker a ceasefire, which brought an uneasy end to the fighting by 24 July.

Turkey had intervened, got her foothold on the island and protected her minority.  By then the Turkish forces were in command of a wide land corridor between Kyrenia and Nicosia. So far, this part of Turkeys “illegal invasion” is widely known.

Second Phase of the 1974 Cyprus War

What happened next is not so well known and is blurred in the history books. Because there were two phases to the ‘Cyprus war.’

After the July lull, there were numerous breaches of the ceasefire as both sides jockeyed for position and played for time. The UN ceasefire was more honoured in the breach than in the observance.

On 2 August 1974 Greek forces captured a Turkish armoured resupply column, including an M-47 tank and an APC – the captured M-47 later engaged a confused Turkish tank squadron near Skylloura on 15 August, hitting seven M-47 tanks. And on 6 August, the Turkish 28 Division launched a surprise attack, supported by 30 tanks, and overran the Greek forward positions around Lapithos (Lapta) and Karavas (Alsancak) west of the bridgehead to straighten out their line.

By 14 August the Geneva talks, aimed at a political solution, had broken down. Turkey’s demands for a bi-zonal federal state plus complete population transfer shocked Cyprus’ acting President Clerides, who asked for an adjournment in order to consult Athens and his fellow Greek Cypriot politicians. But the long shadow of the Machiavellian archbishop fell over the table. No-one trusted Makarios, dissembling, lying and stalling to the last.

Turkey flatly refused any more delays and the Prime Minister Bülent Ecevit ordered Phase 2 of Operation Attila.  Now with two divisions, an armoured brigade, 200 tanks, (many of them the newer M-48) and over 150 guns on the island, plus total air supremacy, the result was inevitable. The outnumbered Greeks could do little in the face of such overwhelming Turkish superiority.

The breakout to the West was spearheaded by 28 division and the Commando Brigade, heading for Morphou (Güzelyurt) and Kormakitis (Koruçam). The Greek defenders were pushed back to their final “Troodos Line” to the south.

To the east, 39 division’s tanks and APCs attacked along two axes: one raced east towards Famagusta and another to the south east towards Mia Milia (Haspolat), and on towards Larnaca. The ten Greek battalions and 20 tanks defending the Eastern sector were overwhelmed.

In the centre a vicious battle developed on 16 August around the Greek national contingent (ELDYK) near the grammar school near Nicosia Airport. After the area had been softened up by bomb and napalm attacks, 2,000 men of the reinforced Turkish Cyprus Regiment, supported by 17 M-48 tanks, assaulted the regular Greek Army positions. Both sides fought hard.

From somewhere near the Star Chinchilla Farm, an unknown Greek Forward Observation Officer (FOO) managed to call in artillery fire from widely dispersed batteries of different guns. This artillery tour de forceseparated the Turkish armour from the infantry, causing serious casualties until a napalm airstrike silenced the FOO for ever.

The fighting went on all day. Four Turkish M-48 tanks were knocked out and 100 Greeks died in the fighting before the survivors slipped away.

The final battle was at Pyroi (Gaziler), south east of Nicosia, on 16/17 August. As the Turks advanced south, a single Greek infantry platoon with tank support attempted to repel a Turkish infantry battalion. In the fighting, four T-34s were abandoned on the road as the defenders fled. The Turks followed, creating the ‘Lourajina Appendix’ in the ceasefire line, bringing Larnaca within range of their guns.

After three days of continuous advance and confused fighting, it was all over. Cyprus was sliced in half. The two communities were ethnically separated. Thousands of refugees were displaced from their homes. The Greek Junta and their puppet Sampson went to jail.

Who was responsible? Even the Greek Court of Appeal in Athens ruled in 1979 that the Turkish intervention was legal: “The real culprits… are the Greek officers who engineered and staged a coup and prepared the conditions for the invasion.”

The Council of Europe agreed: in Resolution 573 it supported the legality of the first wave of the Turkish intervention of 20 July 1974, under the Guarantee Treaty of 1960.

Court of Appeal in Athens, which ruled in 1979 that Turkey’s 1974 intervention was lawful

The bitter truth is that Athens and the Greek Cypriots brought it on themselves. Arrogance, pride and stupidity had brought defeat and disaster.

This article was penned in 2019, and was initially published in Cyprus Today. We republish with kind permission from John Hughes-Wilson.

Col. John Hughes-Wilson is one of Britain’s leading military historians, and a well-reviewed author, broadcaster and commentator on a wide range of intelligence and military historical subjects.

After initial service as an infantry officer with the Sherwood Foresters, during his 25 years in the Intelligence Corps and as a Special Forces Operations officer, he saw active service in the Falkland Islands, Cyprus, Arabia, and Northern Ireland as well as the devious and dangerous political jungles of Whitehall and NATO.

He currently lives in North Cyprus.

Main picture at top of Nicos Sampson parading with a captured Turkish flag in January 1964 in Omorfita / Küçük Kaymaklı. Greek Cypriot women and children follow behind him and his paramilitary troops. Photo © Keystone/Hulton Archive/Getty Images.

EOKA terrorist Nicos Sampson, who killed numerous British police officers during the Cyprus Emergency, later earned the name “Butcher of Omorfita” after leading paramilitaries to attack the large and predominantly Turkish Cypriot village of Küçük Kaymaklı on 24 December 1963, where dozens of Turkish Cypriots were killed or injured, and over 5,500 were forced to flee from their homes.