A Turkish Cypriot football agent has hit out at FIFA’s “double standards” after it announced a football ban on Russia in response to the country invading Ukraine, which also contravenes its motto to ‘keep politics out of sport’.

Monday’s decision by the world football body to bar the Russian national team from international competitions indefinitely was echoed by the game’s European body UEFA, which also slapped a ban on all Russian football clubs and players.

Tekin Birinci, an agent who represents footballers worldwide, described the world as “fake” and asked why similar sanctions were not imposed on the United States of America (USA) when it invaded Middle Eastern countries:

“What a fake world we live in. FiFA banned Russian teams from all competitions. Wasn’t sports and politics not meant to mix?”

“After football, Euroleague has also banned Russia’s basketball teams. Such double standards have not been seen, [or] heard,” Mr Birinci stated, adding, “Why didn’t the USA, which entered Iraq, Libya, Syria, not banned from any sports competitions?”

The agent, who is from the internationally unrecognised Turkish Republic of North Cyprus (TRNC) made the comments on his Facebook page. 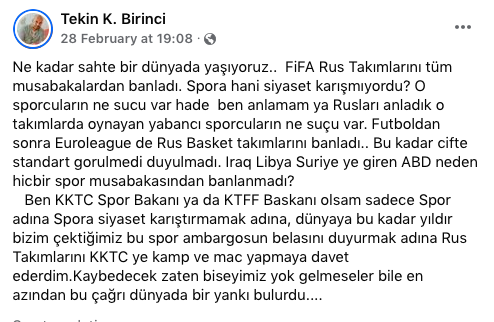 He also noted how Turkish Cypriots have had to endure “years of sports embargoes” due to the unresolved Cyprus dispute, with sports bodies regularly giving them the excuse that they had to ‘keep politics out of sport’.

Turkish Cypriots helped establish the Cyprus Football Association in 1933, which joined FIFA in 1948. However, they were frozen out by Greek Cypriots in 1955 at the start of the Cyprus Emergency when EOKA terrorists started a bloody campaign to unite the island with Greece.

Turkish Cypriots formed their own association in December 1955, and initially they didn’t seek membership of international football bodies as they could play international friendly games, and trying to survive the long years of conflict on the island was more pressing.

They found themselves formally embargoed following the declaration of the TRNC in 1983. The indefinite FIFA and UEFA ban on Turkish Cypriot players and teams from North Cyprus since then even extends to friendly international football matches.

The ban falls foul of FIFA’s own discrimination laws, but remains in place despite pledges to end the international isolation of Turkish Cypriot football.

Mr Birinci said that if he was either the Sports Minister or president of Cyprus Turkish Football Association (KTFF), he would invite Russian teams to come and camp and play games in the TRNC to highlight the hypocrisy of the football authorities, who have readily mixed sports and politics for Ukraine.

“If I were the Minister of Sports of the TRNC or the KTFF President, I would invite Russian teams to come to the TRNC for a camp, in the name of sports, just so we’re not mixing sports with politics, and to let the world know that we’ve had to endure the scourge of this sports embargo for years. For this reason, I would invite the Russian teams to the TRNC for a camp and to play [football] matches.

“We have nothing to lose anyway, even if they don’t come, at least this call would be amplified around the world.”

In 2008, Tekin Birinci became the first Turk to be a licensed football agent. Now aged 39, the Turkish Cypriot told T-VINE he has “struck over 100 deals for footballers in four different continents.”

Mr Birinci, who has personal and professional contacts in both Ukraine and Russia, told T-VINE, ”I am against all war. We had ten years of fighting in Cyprus and nearly 50 years on from the end of the conflict, we Turkish and Greek Cypriots have still not fully recovered.”

“I hope that diplomacy can bring a swift end to the fighting in Ukraine. My biggest gripe is with the hypocrisy of the world’s sporting bodies. They are quick to sanction Russia but not others states. We need to call out such double standards, but the sporting world’s hypocrisy doesn’t end there.

“If FIFA and UEFA can get involved in a political situation like Ukraine, why are they not doing the same for Cyprus and finding a formula, so Turkish Cypriots can play football internationally? Our football federation was formed in 1955, yet we are still excluded from international competitions. This discrimination by FIFA and UEFA against Turkish Cypriots is totally unacceptable.”

Initially, FIFA was hesitant to impose any sanctions on Monday, but the world football body did a U-turn on Monday after the International Olympic Committee issued a decree stating a ban on Russia was essential to “protect the integrity of global sports competitions and for the safety of all the participants”.

FIFA then issued a statement with UEFA about banning Russia from international football indefinitely on Monday, 28 February:

The joint statement said: “FIFA and UEFA have today decided together that all Russian teams, whether national representative teams or club teams, shall be suspended from participation in both FIFA and UEFA competitions until further notice.”

“Football is fully united here and in full solidarity with all the people affected in Ukraine. Both presidents hope that the situation in Ukraine will improve significantly and rapidly so that football can again be a vector for unity and peace amongst people,” the statement continued.

Supporters of FC Barcelona with banners to stop the war between Russia and Ukraine during the La Liga Santander match between FC Barcelona v Athletic de Bilbao at the Camp Nou on February 27, 2022 in Barcelona, Spain

The decision means that Russia will not compete in next month’s World Cup play-off against Poland for a place at the World Cup Finals in Qatar at the end of this year. Similarly, Russia’s women’s team will not now take part in this summer’s Women’s European Championship that is being hosted by England.

In addition, UEFA has terminated its sponsorship deal with the Russian energy giant Gazprom, which is majority state-owned, that was worth tens of millions of pounds a year.

Countries the USA has invaded or bombed since 1950

There is a precedent for imposing sporting sanctions on Russia. In 1992, FIFA and UEFA fell in line with United Nations sanctions by expelling Yugoslavia from their competitions after war broke out in the Balkans.

Yet no such sanctions have ever been brought on the USA, despite them bombing or invading countries 37 times since 1950.

The list below shows which countries have been bombed or invaded by the Americans and when these events took place.