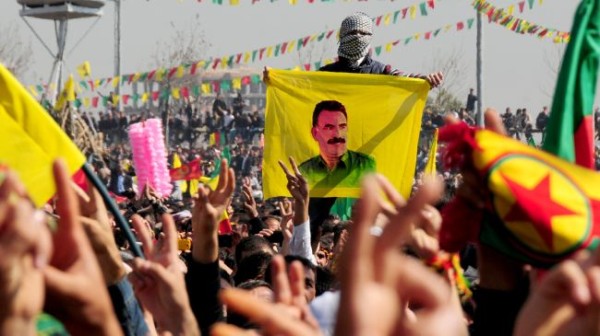 Using the Nevruz celebrations as his platform, jailed PKK leader Abdullah Öcalan called on Kurds to lay down their arms and work for peace in Turkey.

In a letter read out on his behalf by members of BDP (pro-Kurdish Peace and Democracy Party), Öcalan said “Today a new period is beginning…From a period of armed resistance, a door has been opened to democratic struggle.”

It was heard by hundreds of thousands of Turkish Kurds gathered in Diyarbakır, south east Turkey, for the annual spring celebrations.

Turkish Prime Minister Erdoğan responded by saying, “I find the call a positive development. But the essential thing is [putting it into] practice,” adding. “We would like to see Öcalan’s remarks produce results in the shortest time possible.”

Immediately after Nevruz, Murat Karayılan, a senior PKK commander in Kurdish-controlled northern Iraq, declared a ceasefire but said his men were ‘as ready for peace as they were for war’. They demand the freeing of thousands of jailed PKK sympathisers, an amnesty for some PKK fighters, improved conditions for Mr Ocalan and a new constitution in Turkey that enshrines their cultural and political rights.