Carnage at Istanbul nightclub: what we know so far about the New Year’s Eve attack on Reina 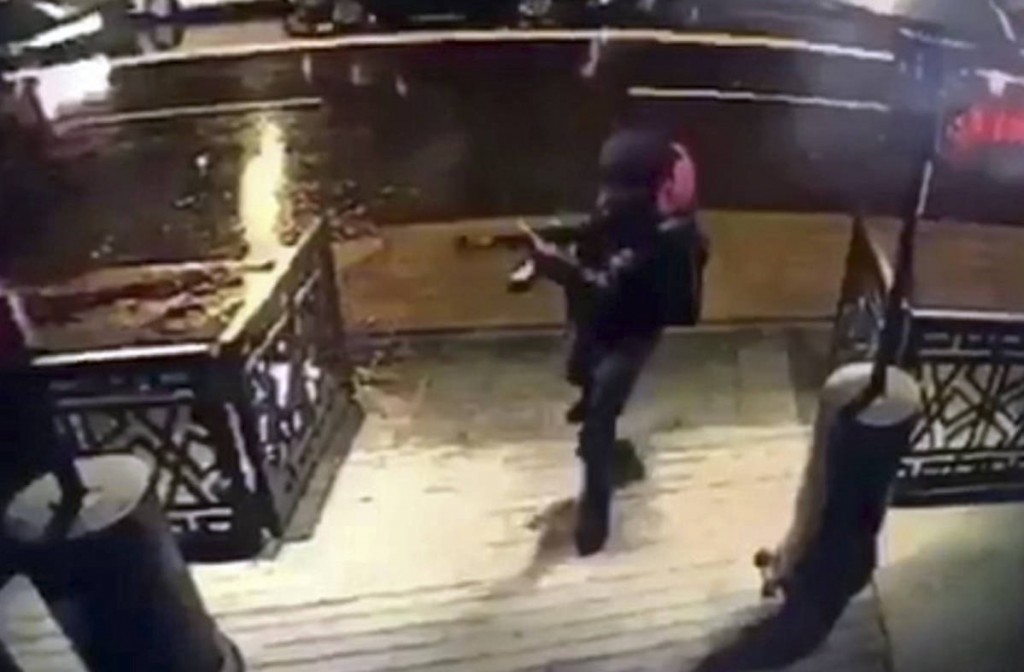 A New Year’s Eve party at one of Istanbul’s best-known clubs turned into a blood bath in the early hours of Sunday morning after a gunman opened fire killing 39 and injuring scores more. Reina, located by the First Bosphorus Bridge in Ortaköy, central Istanbul, was packed full of people at the time.

The terrorist attack was captured on CCTV. The man, armed with an automatic assault rifle, is seen firing at security stood at the front door before entering the club where he sprays guests waiting to pass through the security screens with bullets.

Immediately after the terrorist attack, the Turkish authorities launched a huge manhunt to catch the perpetrator and those that had assisted him.

Some 600 people were in Reina on Saturday night to see in the New Year. The glamorous club is popular with the city’s well-heeled and tourists alike.

Using CCTV, police tracked the killer’s movements, as he got into a taxi at 11:58 pm in the Zeytinburnu district of Istanbul and headed to Ortaköy. A few minutes away from Reina, the gunman got out of the taxi due to heavy traffic, taking his bag from the trunk of the car and walked the remaining distance to the club.

He struck at 1.17am, killing a 22-year-old policeman and security guard standing at the doorway, as well as a driver for a local tour operator who had transported some of the club’s international guests.

180 bullets were fired from his Kalashnikov, many around the DJ cabin, in an attack which lasted just seven minutes.

“We were having fun. All of a sudden people started to run. My husband said ‘don’t be afraid’, and he jumped on me. People ran over me. My husband was hit in three places,” one club-goer, Sinem Uyanık, told media assembled outside the club as she was being treated by paramedics.

“I managed to push through and get out, it was terrible,” she said, describing seeing people soaked in blood.

Media reports say the authorities are evaluating how the attacker seemingly knew all of Reina’s exits, including three secret doors known only by the personnel working there.

In a statement made after the attack, the club’s owner Mehmet Kocarslan said Reina had been checked earlier in the week as part of a wider police operation. The inspections came after US intelligence warned about a planned Daesh attack on the city.

Among the Turks who died in the attack were security guard Hatice Koç Karcılar, 29, Burak Yıldız, a 22-year-old police officer, and security guard Fatih Çakmak, aged 35. Çakmak had survived a deadly twin car bomb attack outside Beşiktaş Football Club where he was working on 10 Dec., but was fatally wounded at Reina three weeks later.

Immediately after the attack, suspicion fell on Daesh. The incident bore similarities to last June’s suicide attack on Istanbul Atatürk Airport, undertaken by three Daesh operatives originating from Central Asia, as well as the Paris terror attacks of Nov. 2015, when the Bataclan music venue along with the city’s bars and restaurants were targeted.

In a pre-recorded message released in November, Daesh leader had urged his soldiers to wage all-out war on Turkey.

“Turkey entered the zone of your operations, so attack it, destroy its security, and sow horror within it. Put it on your list of battlefields. Turkey entered the war with the Islamic State with cover and protection from Crusader jets,” he said referring to the US-led air coalition.

“Unleash the fire of your anger on Turkish troops in Syria,” al-Baghdadi added in the video, whose authenticity could not be verified.

In December, the Turkish public were horrified by a video released by Daesh showing two men they claimed to be Turkish soldiers being burned alive. The authorities tried to prevent the video going viral, but failed. The authenticity of the clip has not been verified, although the government did confirm Daesh was holding three Turkish troops captive.

On Tuesday, Jan 3, a statement issued by Daesh via Aamaq – the group’s official news agency – said the Reina attack was carried out by a “heroic soldier of the caliphate” who attacked the nightclub “where Christians were celebrating their pagan feast” in “revenge for God’s religion and in response to the orders” of al-Baghdadi.

The group described Turkey as “the servant of the cross” for being part of the US-led coalition making military strikes against Daesh in Syria and Iraq.

“We let infidel Turkey know that the blood of Muslims that is being shed by its airstrikes and artillery shelling will turn into fire on its territories,” the statement said.

A selfie clip taken by the prime suspect has been released by police. It’s not clear if the footage was taken before or after the attack, and shows the man dressed in a black bomber jacket walking around in Taksim.

His fingerprints and camera images have helped the authorities identify him, but they have yet to release his name. His wife, however, has been detained.

The woman and her two children were located after police examined the phone of a taxi driver who reportedly took the Reina gunman from Ortaköy to Kuruçeşme after the attack. During the journey, the gunman asked to make a call using the driver’s phone before he exited the taxi.

Media reports said the killer and his family flew from Kyrgyzstan to Istanbul on Nov. 20 and then drove via Ankara, the Turkish capital, to Konya, arriving there on Nov. 22. The family’s presence is believed to have helped the terrorist avoid detection, as single young foreign men are scrutinised more closely when they enter Turkey.

The killer’s wife denies all knowledge that her husband is a jihadi terrorist, claiming she only found out after watching news reports.

Counter-terrorism experts who viewed footage of the gunman in the club reloading his weapon with ease, emptying six magazine clips, while also throwing hand grenades, concluded he was a professionally trained terrorist with weapons training. The man is suspected to be either Kyrgyz or Uzbek.

“When you invite cannibals to dinner you can expect to end up as the main course.”

Writing for Huff Post, Daesh specialists Ahmet S. Yayla and Anne Speckhard highlight the role of Central Asians in extreme Islamist movements. Having previously supported Muslim Chechens against Russia in a conflict that ran from 1994 to 2009, these battle-hardened jihadis moved to Syria and Iraq.

When interviewed by Yayla and Speckhard, Daesh defectors “often referred to [central Asian fighters] as the Special Forces of ISIS and described as highly experienced, military trained, taking the lead in battles and doing the most killing while the others followed behind.”

In the early years of the Syrian conflict, Turkey’s porous borders meant jihadis could easily pass through the country into Syria and back again. Young pious Turks joined Daesh and rebel Syrian groups, including Al Nusra – an off-shoot of Al Qaeda. Initially the rebels were backed by the Turkish government and others in the US-led coalition as part of the fight to remove Syrian President Bashar al-Assad.

A change in Turkey’s Syrian policy has seen them pitted against Daesh in the past few years, making the country a target for the terror group. As one counter-terrorism expert said, “When you invite cannibals to dinner you can expect to end up as the main course.”

While politicians and people from all over the world have shared their condolences with Turkey for the latest terror atrocity – the eighteenth to hit Turkey in the past year – its own public remain deeply divided.

There was outrage after some Turks took to social media to celebrate the deaths of those who lead a secular, non-Muslim lifestyle. It prompted Prof Mehmet Görmez, Turkey’s Head of Religious Affairs, to issue a strong counter-statement that said:

“There is no difference whether this barbarous action was done in a bazaar, or a place of worship, or in an entertainment venue. The target of terrorists are not places, but the people, the country, the nation, and humanity overall. Terror can never be accepted no matter by who, or whom it is committed”.

Yet days before the Reina attack, Prof Görmez released another statement calling the celebration of Christmas and New Year in Turkey “unislamic” and that its practice in Turkey was turning the nation into “degenerates” (“Bu davranışlar toplumu yozlaştırıyor”).

His message was reinforced by the Ministry of Education. Many schools reported receiving directives from the Ministry’s regional board telling them not to celebrate Christmas and New Year. As a result, an incident reported in the German press, said a choir from the Istanbul Boys Senior High School were not allowed to participate in the annual singing of Christmas hymns organised the German Consulate – a tradition that had previously taken part in.

Critics argue that statements by government ministers and religious leaders are creating a toxic climate that is legitimising bigotry and inciting religious hatred. Last week, pictures were posted online of members from Alperen Ocakları, an ultra-religious nationalist group, holding a gun to the head of a man dressed as Santa in Aydın. Police arrested and subsequently released all those involved.

On 30 Dec., an Islamist youth group called the Anadolu Gençlik Derneği (Anatolian Youth Association) gathered outside İstanbul University’s Science and Literature Faculty. After shouting “Allahu Ekber”, they pretended to circumcise a blow-up Santa before stabbing it. The group is part of the Saadet Party, a conservative pro-Islam political party, which has mounted similar anti-Santa protests in previous years.

Anti-Christmas banners and billboards were also displayed across Turkey, with no any action taken by local authorities to remove them. One banner in İkitelli showed a bearded man punching a Santa with the slogan: “We are Muslim. Say no to celebrating Christmas and New Year”.

Turkey has a growing problem with religious fundamentalism. Some of the country’s biggest terror attacks have been committed by home-grown jihadis, including the bombing on İstiklal Caddesi in March and Kurdish Alevi wedding in Gaziantep in August last year, and the Diyarbakır HDP rally, Ankara Peace Protest and Suruç bombings of 2015, between them killing 198 civilians.

Until recently, little had been done by the AKP government to counter the threat posed by known extremist Islamist groups, even though Turkish intelligence had identified terror cells inside the country. Instead, resources had been deployed in combating Kurdish PKK terrorists and weeding out and arresting members of the FETO group suspected to be behind the coup attempt last July.