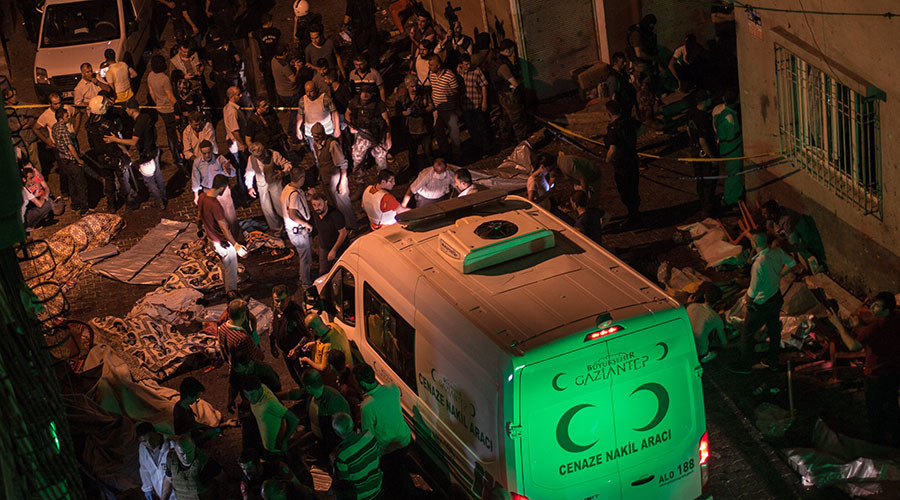 Gaziantep Governor Ali Yerlikaya called the bombing an “abhorrent terror attack.” He told media that the bomber struck at 10.40pm local time in a residential area of Akdere Neighbourhood in Şahinbey, where hundreds of guests had gathered for a kına (pre-wedding bridal henna) party.

Many people were dancing in the streets when the blast occurred. Photos taken after the explosion showed bodies covered with white sheets. Local journalist Mehmet Taşcıoğlu told NTV television that the huge explosion could be heard from many parts of the city.

Witnesses say the bomber came to the wedding with two others, who fled immediately after the blast. Police are currently investigating.

Local MP Mahmut Toğrul, from the primarily Kurdish opposition HD Party, told Reuters the wedding was for a Kurdish couple and his party later confirmed they were HDP members. A separate report posted by Doğan News Agency (DHA) said the couple had moved from the eastern town of Siirt to escape the fighting between the PKK and Turkish army.

The majority of last night’s victims were of Kurdish Alevi background and many perceive the attack to be a deliberate provocation to further inflame tensions in a part of the country that has been plagued by terror attacks since last summer.

The collapse of a ceasefire between the government and the PKK in July 2015 has resulted in a new and deadly wave of violence. The militant Kurdish group has mounted regular terror attacks against Turkey’s security forces and the army’s determined response has left parts of southeast Turkey looking more like war-torn Syria, with thousands killed, injured and displaced.

The region, much of it bordering Syria, has also been the breeding ground for Daesh sympathisers. Cells are known to be operating in Gaziantep and surrounding areas, attracting radicalised young Sunni Turks and Kurds. One Adıyaman cell carried out several devastating suicide bombings last year, including at a peace activists meeting in Suruç on 20 July, killing 34, and a twin blast at a huge peace rally in Ankara on 10 October, that left 103 dead and hundreds injured.

Following last night’s barbaric bombing, HDP co-leader Selahattin Demirtaş said, “The attack in Antep intended to bring about chaos and civil war. I call on the MPs of all political parties in Antep: let us be united for the funeral service, stand side-by-side. These photos will be the best response to those vile cowards.”