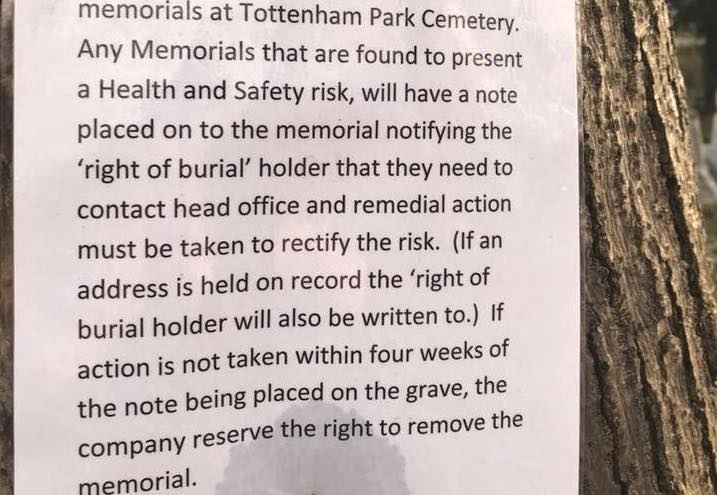 Relatives visiting loved ones buried at a North London cemetery were in shock after seeing notices from the landowners informing them that headstones deemed to be “a Health and Safety risk” could be removed. The typed notices, from Badgehurst Limited, were found posted on trees at Tottenham Park Cemetery.

The single A4 page of text on laminated paper stated that, “Badgehurst Ltd are carrying out their annual survey of the stability of memorials at Tottenham Park Cemetery. Any Memorials that are found to present a Health and Safety risk, will have a notice place on to the memorial notifying the ‘right of burial’ holder that they need to contact head office and remedial action must be taken to rectify the risk. (If an address is held on record the ‘right of burial holder will also be written to.)”.

The notice, dated 1st February 2018, continues: “If action is not taken within four weeks of the note being placed on the grave, the company reserve the right to remove the memorial.”

“If action is not taken within four weeks of the note being placed on the grave, the company reserve the right to remove the memorial”

The Tottenham Park Charitable Trust (TPCT), which represents families and friends of those buried at Tottenham Park Cemetery, said it had not been notified of this decision by Badgehurst, and that it only became aware when a photograph of it was posted on the organisation’s Facebook group by a member.

The development has caused an outcry amongst relatives. One gentleman wrote, “These people have no morels [sic] or heart”, while a lady branded the company “absolutely appalling”, claiming she had “personally witnessed a new grave opening with the earth placed on an existing grave!!!!”

A third person wrote on TPCT’s Facebook page that, “Considering they [Badgehurst] have flagrantly disregarded any issues of H&S in respect of pathways, security, disposal of human bones, overhanging trees and drainage, these signs are complete hypocrisy!”

Several people also questioned the company’s real motive. One wrote, “They have probably been contacted by Enfield Council and are getting their own back”, while another cynically posted, “They have run out of graves and are looking to remove graves.”

The privately-run burial ground has long been a popular place of rest for British Turks. For years, friends and families of those interred at Tottenham Park Cemetery have complained to the company and local authority about the unkempt state of the cemetery, which is in marked contrast to the immaculate condition of those maintained by local councils.

The problems between the landowners and relatives have intensified in recent months, with TPCT lobbying Enfield Council to take remedial action over the serious complaints. The Trust argues that Badgehurst is not fulfilling its responsibilities in maintaining the site, where a single plot for a grave can cost close to £4,000.

Relatives have protested about the damage to existing memorials when Badgehurst staff open up new graves in the tightly-packed cemetery. Visitors have also presented extensive evidence of how various parts of the site are an ongoing health and safety hazard, with rubble from old graves left by the landowners, who are also accused of failing to fix broken paths, and that the density of graves makes the space between them virtually non-existent and so difficult to access. There have also been allegations of illegal exhumations.

With thousands of British Turks buried at the site, developments at Tottenham Park Cemetery affects a substantial number of the community. In recent months, TPCT’s campaign to push the cemetery owners into fulfilling their responsibilities has received high profile backing from the likes of Baroness Meral Hussein-Ece OBE, and local MPs Kate Osamor and Joan Ryan.

Last month, the Trust announced it was going to hold a public meeting at Grand Banqueting Palace in Wood Green on Thursday 15 February to discuss how to take the campaign forward. Hundreds are expected to attend.