North Cyprus through to the CONIFA World Cup quarter-finals 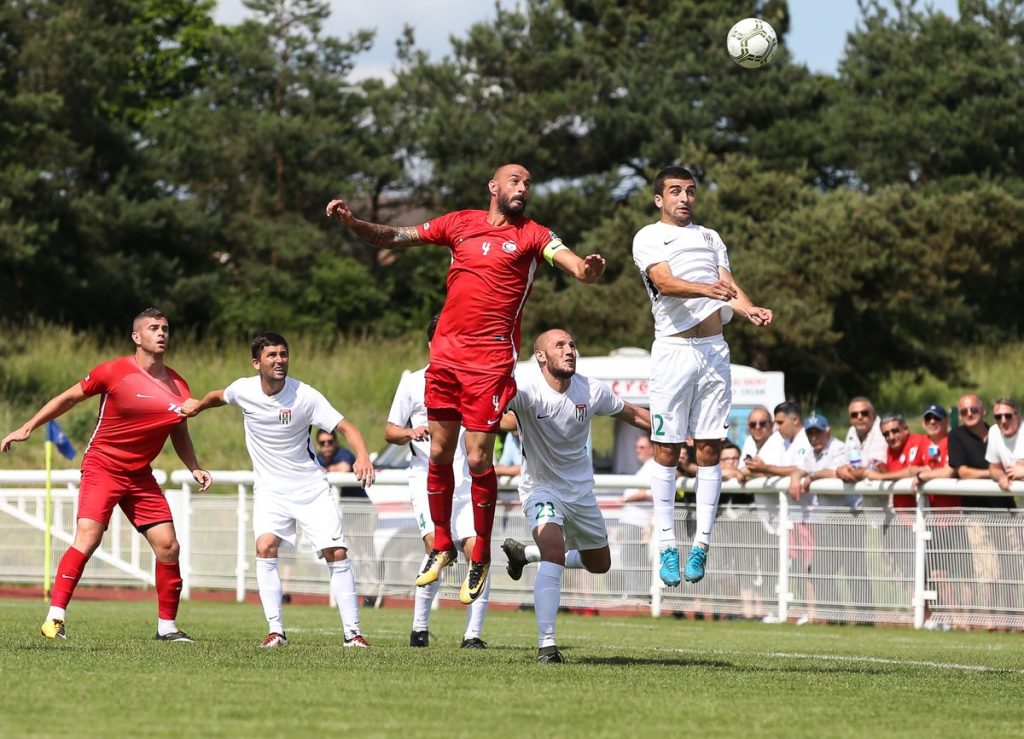 Two draws and a win over the weekend were enough to send North Cyprus through to the next round of the Paddy Power CONIFA World Cup. The Turkish Cypriot national side were runners-up in Group B, having drawn their last game against reigning world champions Abkhazia, who failed to qualify for the quarter-finals.

North Cyprus now face Somali team Barawa, who topped their group after winning two of their three games. The quarter-finals take place at Sutton United’s Gander Green Lane at 3pm on Tuesday 5 June. The winner goes through to the semi-finals to be played at Carshalton’s grounds on Thursday at 5pm.

Following a less than impressive opening game against Kárpátalja, which saw North Cyprus’ star young striker Ahmet Sivri sent off towards the end of the game following an off-the-ball fracas, the team’s second game against Tibet saw a significant improvement.

A record crowd of some 1,200 people turned up to the game, with both sets of fans colourful and noisy with drums and chants, as they urged on their teams. As in their first game, the Turkish Cypriots started well, pressing their opponents and dominating the game. They were ahead after just two minutes courtesy of Halil Turan, who unleashed a fierce shot as he raced towards the Tibetan goal. A second nearly followed after the re-start with a diving header from Uğur Gök. Another attempt found the back of the net, but Gök was ruled offside.

Tibet weathered the pressure to head into half-time 1.0 down. Within minutes of the second half starting, the Turkish Cypriot contingent were stunned into silence as Kalsang Topgyal scored for Tibet, sending their supporters wild. Topgyal came close to a second, but his effort was just wide of the target. However, their attacking play put North Cyprus on the back foot, who struggled to find the same pace and dominance as the first half.

Eventually though, the superior technique and strength of the semi-professional Turkish Cypriot players saw off the Tibetan challenge. Turan scored his second of the game on the 66th minute from an acute angle which ricocheted into net off the goalkeeper’s gloves.  Eight minutes later, Gök also ended up on the scoresheet after chipping the Tibetan goalkeeper Tenzin Bhakdo to make it 3-1.

2-2 draw against Abkhazia knocks out the world champions

The teams faced their third match in four days, playing again on the Sunday in their final group games. With Kárpátalja beating Tibet to secure seven from a possible nine points, North Cyprus needed a draw, while Abkhazia had to win to be certain of going through to the quarter-finals.

The game was intense from the first whistle. North Cyprus again set off at a blistering pace, with Billy Mehmet and Halil Turan coming close. But it was Abkhazia, against the run of play, who scored first courtesy of Maskaev on the 20th minute. Twelve minutes later the game was back to level as Ünal Kaya headed home following a free kick. Just before the half-time whistle went, Abkhazia almost went ahead again when Ashamur Tsishba’s free kick struck the crossbar.

North Cyprus sat back and let Abkhazia chase the game for the win, seeking to counter attack when the opportunity came. It did in the 77th minute, when Kenan Oshan scored from six yards out. As in the first Group B game though, North Cyprus’ lack of discipline cost them dear. This time a Turkish Cypriot player saw green, not a red card, which meant they had to leave pitch immediately. However, unlike a red card, under CONIFA rules, the manager can send on a replacement if the team has not used up all its substitutions. Along with the enforced substitution was a penalty to Abkhazia, which they duly scored. Extra time was frantic as the world champions pushed for the winning goal, but it was not to be.

Group B runners-up North Cyprus play Group A winners Barawa in the quarter-finals on Tuesday 5 June. It’s a 3pm kick-off for the game, which is being staged at Sutton United’s ground.

There is limited parking at the ground, with town centre car parks 10-15 minutes walk away. Alternatively, leave the car at home and use public transport.

Sutton United FC is just a 2 minute walk from West Sutton rail station, with Southern and Thameslink trains passing through. Get a central London train from Blackfriars, Victoria or Waterloo (direct) stations.

Tickets in the quarter-finals are priced £11 for adults, or £5.50 for under 18s, and are available online or at the turnstiles. To buy in advance, click here.