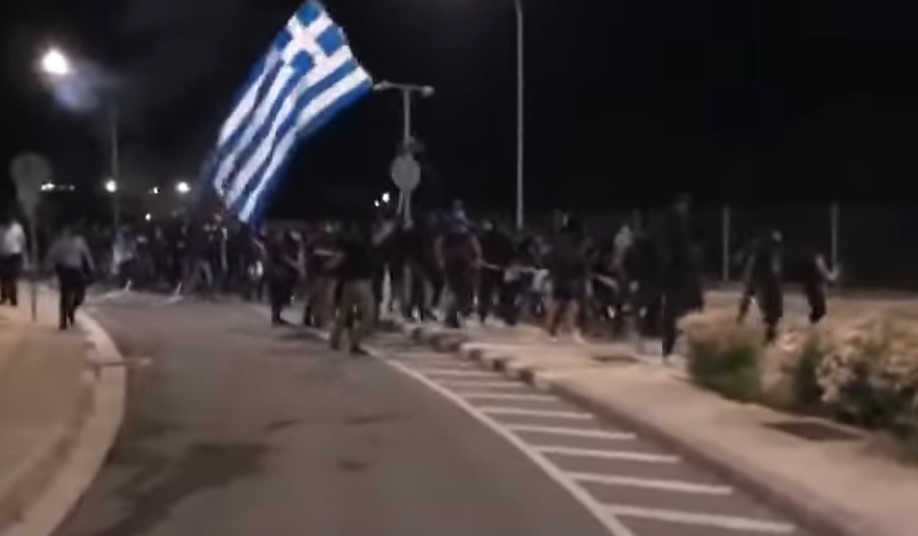 On Sunday evening, while most Turkish Cypriots were focussing on the outcome of the first round of the Presidential Election in the Turkish Republic of North Cyprus, around 200 Greek Cypriot fascistshad assembled at the Derinya / Deryneiacheckpoint in Mağusa / Famagusta for an impromptu protest.

The scenes on 11 October, captured on camera, show the men dressed mainly in black, many wearing masks,  chanting racist slogans such as “Cyprus is Greek.”

They waved Greek flags and were seen carrying bricks and large sticks as they advanced on mobile metal barriers erected at the border crossing.

After a short exchange with police and security officials, the thugs pushed through the barriers and headed to the fencing that separates South Cyprus from the Green Line Buffer Zone, and from there the TRNC.

The protesters released flares that caused several small fires in the arid no-man’s land, which is policed by UN peacekeeping forces. The UN managed to put out the fires before they spread across the border, but the alarm was raised and for a short time there were fears the Greek Cypriot hardliners would breach the border.

The response from Turkish Cypriots waiting on their side of the border to cross remained good natured. Someone blasted Ottoman military music from their car stereo. Others got out of their vehicles and started to sing the Turkish national anthem.

Ostensibly the Greek Cypriot protestors, which included members of South Cyprus’ far-right ELAM party, were there to demonstrate against the decision of the TRNC Prime Minister Ersin Tatar to partially re-open the abandoned seaside resort of Maraş / Varosha.

The Turkish Cypriot leader had made an unexpected announcement on Tuesday, 6 October, while in Ankara, that he was granting public access to Maraş’s beachfront and the streets leading to it.

Two days later the town, on Cyprus’ eastern coast, opened to curious eyes for the first time in 46 years. Within the first five days, over 18,000 people had visited the ghost town, uninhabited after its mainly Greek Cypriot residents had fled following the 1974 Cyprus War.

Since then Maraş has been under Turkish military control waiting for a comprehensive settlement to the Cyprus Problem, running since December 1963, that will allow its original residents and property owners to return.

UN Resolutions dating back to1984 ban the resettlement of non-Varosha residents in the town. For many Greek Cypriots, the TRNC’s unilateral decision to open the town to visitors threatens this vital safeguard.

A large protest was held inDeryneia– the closest border crossing to Varosha – on the day of the historic re-opening of the town. While the demonstration was peaceful, the anger of those present was palpable.

In contrast, Sunday’s protesters came prepared for violence, and there is a real danger the event was a precursor to something far larger.

A demonstration organised by the Initiative for the Memories of Isaak and Solomou and other Greek Cypriot nationalist groups is scheduled for tonight, Saturday 17 October, at 7:30pm local time at the Deryneia checkpoint.

The organisers demand the decision to open Varosha is reversed and “Turkish occupiers” leave the island. They have resorted to using the ‘Bloody Map’ –  racist imagery showing blood dripping from the Turkish North to the Greek Cypriot South, on flyers advertising the protest.

Since Sunday, there has also been an explosion of other highly inflammatory, anti-Turkish material being circulated on Greek Cypriot social media pages. They include images of the Turkish flag being burnt and illustrations of a Greek soldier slitting the throat of a Turk.

Officials on both sides are said to have increased security in anticipation of problems.

Many ordinary Cypriots are fearful there could be a repeat of the tragic events of 1996 that cost three people their lives.

One London-based Turkish Cypriot woman, who asked not to be named, told T-VINE she was worried for her brother-in-law and his family, who live in Derinya near the border crossing.

“We were shocked by the video of Greek Cypriot fascists storming their side of the border [on Sunday]. My brother-in-law is nearby. They went to bury his nene [grandmother] that day. The police told them to go sit inside and lock the doors.”

“I won’t lie, but I’m a bit worried. It was like we were back to August 1996, when Greek Cypriots came across the Buffer Zone. I was in Cyprus then and we all genuinely feared there’d be war after two [Greek Cypriot protestors] were killed,” she added.

On 11 August 1996, Tassos Isaac was part of a group of Greek Cypriot bikers who went to Deryneiato protest Turkey’s 1974 intervention and division of the island. Some of the riders had travelled across Europe to join the protest.

Back then, border crossings between the two sides didn’t exist. The UN tried to prevent protestors from reaching the DeryneiaBuffer Zone, knowing any breach would invoke a strong reaction from the Turkish side. Goaded by Greek Cypriot politicians and members of the Orthodox Church, the demonstrators refused to be deterred.

Leaving their bikes in the town, they marched on foot to the Buffer Zone, and forced their way across. There was a distinct absence of Greek Cypriot security personnel and the limited number of UN forces in no-man’s land were quickly overrun by the protestors.

On the opposite side of the border hundreds of Turks, some said to be members of the fascist Grey Wolves group, had also assembled. As Greek Cypriots retreated, Isaac became trapped and was filmed being beaten to death by a mob of Turkish Cypriots.

Tensions were running high after the killing of Tassos Isaac. Following his funeral on 14 August, attempts were made to hold a repeat of the protest in Deryneia, attended by the deceased’s cousin Solomou. He and other Greek Cypriots again tried to force a confrontation.

This time the Turkish military were present and despite repeated warnings, Solomou proceeded to climb up a flagpole and attempt to pull down the Turkish flag. Turkish soldiers shot and killed the 26-year-old, with the incident broadcast live.

Isaac and Solomou are regarded as heroes in the South, and it is feared some of Saturday’s protestors may try to emulate them.

Sadly, the events of 1996 didn’t end with these two deaths. In a tit-for-tat killing a Turkish Cypriot soldier, Private Allahverdi Kılıç aged 20, was slain by four bullets while on night duty at Güvercinlik in Mağusa, on 8 September 1996. Another Turkish soldier, Burhan Cihangir, was also wounded.

Bullets rained down on the pair as they stood guard by the Green Line next to the Dhekelia British Military Base. Like Isaac and Solomou, Kılıç’s killers have also never been caught.

Tonight’s Derinya demonstration, on the eve of the run-off of the TRNC Presidential Election, is likely to attract Turkish Cypriots on their side of the border.

One local man planning to attend said: “We got to show them [Greek Cypriots] we aren’t going to let them cross the border to cause havoc.”

Greek Cypriot leader Nicos Anastasiades and officials from his DISY party have called for “restraint” tonight.

“I extend a warm appeal to all those who will participate in the event, to behave responsibly and to express their feelings of indignation in a way that will not allow the Turkish settlers and the Grey Wolves, who will gather in the area, to use any action to achieve what Ankara is seeking,” Mr Anastasiades said in a written statement.

The South Cyprus President raised eyebrows after issuing only a mild rebuke against last Sunday’s protests, failing to condemn the thuggish, racist behaviour. Instead, Mr Anastasiades has empathised with the demonstrators, stating that he ‘fully understands and shares the feelings of bitterness and indignation from Turkey and the occupying regime’s actions’.