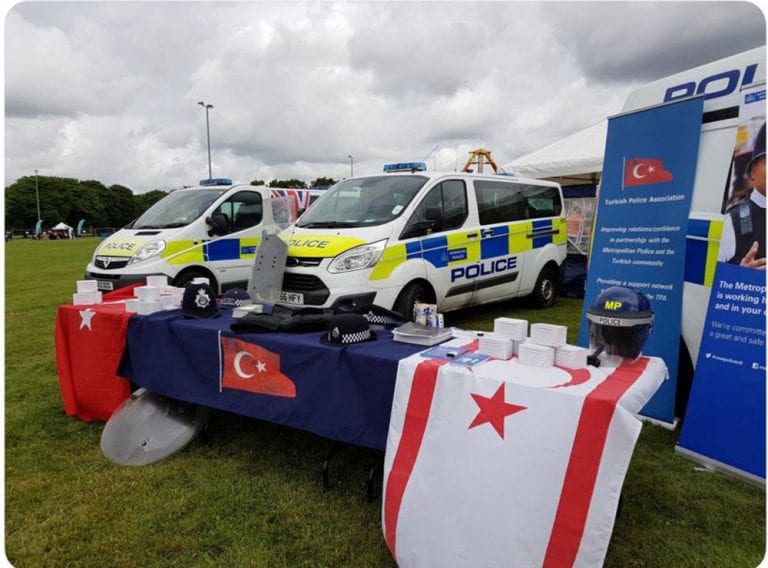 London police chiefs have apologised to a UK-based Greek Cypriot lobby group after officers displayed the flag of the Turkish Republic of Northern Cyprus (TRNC) at a festival in the borough of Enfield.

A spokeswoman for the Metropolitan Police Service (MPS) confirmed to T-VINE this week that it had recently issued an apology to the National Federation of [Greek] Cypriots in the United Kingdom (NFCUK) following an investigation.

The organisation had made a complaint to the MPS after members of the Met’s Turkish Police Association unfurled the TRNC flag at the 2nd Turkish Cypriot Cultural Festival at Donkey Lane in June last year.

The flag was seen draped over a table as part of the association’s stand, which also featured the flag of Turkey.

An image of the stand including the TRNC flag was shared on Twitter via the official Enfield MPS account, which invited people to “come along”.

It was later deleted, however, after receiving criticism from the NFCUK and other Twitter users.

Met Police “The [TRNC] flag itself is not prohibited or illegal, but is of a historic disputed territory”

The use of the flag also sparked a formal written complaint from NFCUK president Christos Karaolis to Met Police Commissioner Cressida Dick.

He wrote a letter to the London police chief claiming that the TRNC flag was “illegal” and that displaying it at the festival and sharing the image on social media had caused “deep disrespect, hurt and insult” to the “UK Cypriot community”.

The NFCUK reported on its website, 11 months after raising the issue, that it had received an apology from “Superintendent Mehtab” on behalf of the MPS, who said that the incident had shown a “clear need for learning and guidance to be given by the MPS in relation to displaying of the said flag by police whilst on duty with MPS”.

The investigation report also recommended the need for “refresher training” for staff authorised to tweet on behalf of the MPS, according to the NFCUK.

Mr Karaolis said he welcomed the apology and expressed his “public gratitude” to the Met Police Greek and Cypriot Staff Association and its chairman Tom Haji-Savva for their “steadfast support and advice in resolving this issue”.

Confirming the apology, an MPS spokeswoman said in an email to T-VINE:

“A complaint was received by the Metropolitan Police Service on Wednesday, 20 June [2018], in relation to a flag exhibited of the so-called ‘TRNC’ at the Turkish Cypriot Festival at Donkey Lane on Sunday, 17 June, 2018.

“The flag itself is not prohibited or illegal, but is of a historic disputed territory.

“The image including the flag was later also shared on the official Enfield MPS Twitter, which was taken down.

“A review was conducted by the Met’s Directorate of Professional Standards (DPS).

“The officers were not found to be acting in any intentional discriminatory way. The purpose of the tweet was to advertise the [Turkish Cypriot Cultural Festival] event to a wider audience of the community who follow the Enfield Twitter page.

“From the report, an apology was sent to and then published on The National Federation of Cypriots in the UK’s website.

“The review also picked up a clear need for learning and guidance to be given by the MPS to all staff support associations for impartiality and safeguarding to maintain a corporate compliance with the code of ethics.”

Asked if the guidance stated that the TRNC flag had been now been “banned” by the police, the spokesperson added:

“The MPS has not banned flags at events however, it has been recommended that only MPS approved literature/property is displayed on a stand attended by police to prevent any risk such as this incident to be repeated.”