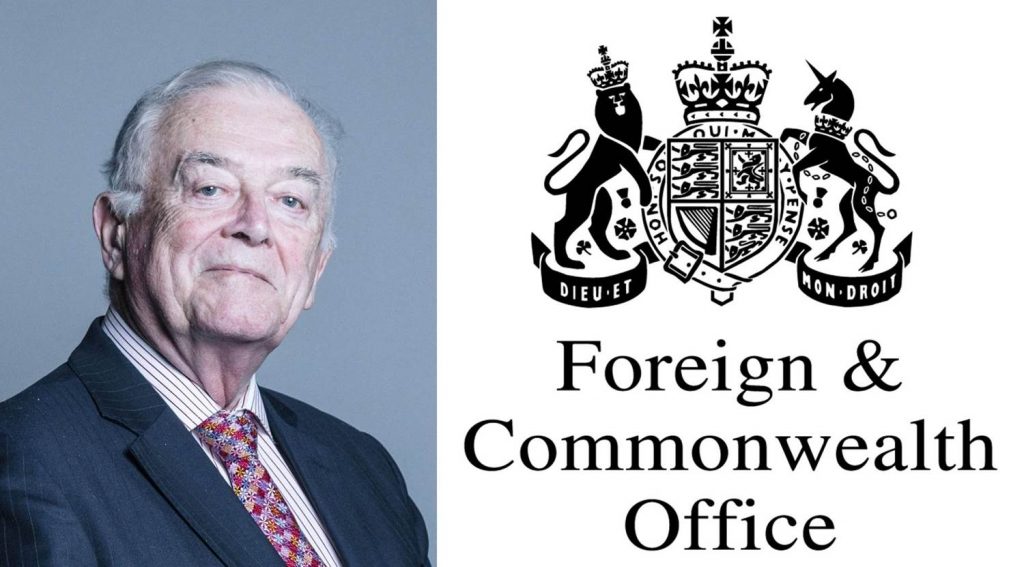 The UK will not take “even the smallest step” to recognise the Turkish Republic of Northern Cyprus (TRNC) because of Greek Cypriot threats over the future of the Sovereign Base Areas, a member of the House of Lords has said.

Conservative peer Lord Balfe said that the TRNC was “right not to trust” the British Government, in comments made exclusively to T-VINE.

He was reacting to a statement from the British High Commission (BHC) in Cyprus that said the UK, while “condemning” the declaration of the TRNC, supports “appropriate measures” aimed at reducing the “isolation” of Turkish Cypriots.

The BHC issued the statement, with “input” from the Foreign Office in London, in answer to questions from T-VINE about the status of Turkish Cypriots in the Commonwealth and their participation in events such as the Commonwealth Games.

The questions were put to the BHC after High Commissioner Stephen Lillie recently issued a ‘Points of Light’ Commonwealth award, signed by the Queen, to human rights campaigner Mine Yücel, as previously reported by T-VINE.

“The whole of Cyprus is considered to be part of the Commonwealth, meaning Greek Cypriots and Turkish Cypriots alike are all Commonwealth citizens,” a BHC spokesperson said.

“We encourage the Association to accept membership of athletes from the whole island.”

British High Commission: “Turkish Cypriots have the right to participate in Commonwealth events as citizens of the Republic of Cyprus.”

Nearly 50 sportsmen and women representing “Cyprus” scooped 14 medals, including eight golds, at last year’s Commonwealth Games in Australia, although not a single athlete was a Turkish Cypriot.

On the issue of recognition of the TRNC and efforts to ease the isolation of Turkish Cypriots, the BHC spokesperson added:

“The UK’s position on non-recognition is well-known. The UK does not recognise the purported ‘Turkish Republic of Northern Cyprus’ in line with relevant UN Security Council Resolutions condemning the Turkish Cypriot unilateral declaration of independence from the Republic of Cyprus.

“We recognise that the status quo in Cyprus causes serious difficulties for Turkish Cypriots and we support appropriate measures aimed at reducing their isolation.

“We continue to believe that a just and lasting settlement in Cyprus is the best means of resolving the difficulties caused by partition of the island.”

The BHC statement was met with scorn by Lord Balfe, a veteran Conservative politician who served as an MEP from 1979 to 2004 and a member of the All-Party Parliamentary Group for the TRNC.

“The UK statement reflects the position of the UK over many years,” he said.

“They refuse to take even the smallest step to recognise the TRNC because every time they make a gesture the Greek [Cypriot] administration condemns them and threatens the future of the Sovereign Bases.”

The UK still retains sovereignty over almost 100 square miles of territory in Cyprus, which include RAF Akrotiri in the south and the Dhekelia base in the east, which borders the TRNC. The bases, collectively known as the Sovereign Base Areas (SBAs), are remnants of British rule of Cyprus. They were established as part of a deal to grant the island independence in 1960.

British governments have in the past offered to give up swathes of SBA land no longer required for military purposes – most recently in 2017 during ill-fated talks in Switzerland – as an incentive for a political settlement between North and South Cyprus. Around 10,000 locals live within the SBAs and hundreds of civilians – Greek Cypriots and Turkish Cypriots – are employed there, supporting British military personnel.

Baroness Hussein-Ece: “little evidence” of British Government living up to its 2004 pledge of “reducing the isolation of Turkish Cypriots”

In December 2011 the British government confirmed its “enduring commitment to the SBAs” following a defence review.

Brexit has complicated the UK’s relationship with the Greek Cypriot part of the island, which joined the European Union in 2004.

The UK’s November 2018 withdrawal agreement with the EU includes a protocol on the SBAs “protecting the interests of Cypriots” who live and work there and sets out arrangements for the import and export of goods between the SBAs and the rest of the island.

Cooperation between “the Republic of Cyprus and the United Kingdom is essential to ensure the effective implementation of the arrangements laid down within the protocol”, the agreement stresses.

“There has been, I regret to say, no difference in approach whichever political party has been in power,” Lord Balfe added.

“The UK is not so much a Guarantor power [of Cyprus] as an extension of the Greek Cyprus position. The TRNC is right not to trust them.”

“The British Government has a special responsibility to promote good relations between the two communities, and in particular the ‘appropriate measures aimed at reducing the isolation of Turkish Cypriots’,” she told T-VINE.

“There has been little evidence of this since the UK Government and the EU pledged this after the failure of the Annan Plan in 2004.

“Sports and cultural events could be a good start, allowing Turkish Cypriots to participate.”

Baroness Hussein-Ece added that she had met Mr Lillie last year shortly before he took up his new post in Cyprus and found him to be “open to listening and discussing issues that matter to all Cypriots”.

She also welcomed the award he presented to Ms Yücel “in recognition of her valuable human rights work”.

A string of British ministers have made pledges to support the Turkish Cypriots over the years, but with little in the way of concrete action.

Jack Straw: UK-backed decision to admit divided Cyprus to EU was one of its “worst strategic decisions ever”

In July 2004 the then Foreign Secretary Jack Straw said that the UK was committed to ending the economic isolation of North Cyprus, following a high profile meeting in London with former TRNC Prime Minister – later to become President – Mehmet Ali Talat.

The meeting took place three months after the Greek Cypriot side entered the EU despite their overwhelming rejection of the Annan Plan, which would have seen a united island admitted to the bloc. Turkish Cypriots had voted by two to one in favour of the proposals.

Thirteen years later Mr Straw said in an article for the Independent that the EU’s decision, with “UK acquiescence”, to admit Cyprus to the EU without a solution had been one of its “worst strategic decisions ever”.

He called for an end to the “charade that negotiated agreement to unite the island with a ‘bi-zonal, bi-communal’ government will ever be possible,” adding that the solution is to “partition the island and give international recognition to the Turkish Cypriot state”.

In June 2008 former British Labour PM Gordon Brown angered the TRNC and Turkey when he signed a Memorandum of Understanding (MoU) with the then Greek Cypriot leader Demetris Christofias. The document aimed to establish a “stronger relationship between the UK and the Republic of Cyprus” through cooperation in a range of areas from education to the economy.

The MoU reaffirmed the UK’s recognition of the Greek Cypriot-run Republic of Cyprus as the sole authority on the island, while also undermining Turkish Cypriot political equality with clauses such as, “supporting establishment of an accreditation process for enabling the Turkish Cypriot higher education institutions to participate in international co-operation programmes”. The clause effectively meant the UK endorsed the international isolation of universities in North Cyprus unless they applied for accreditation from the Greek Cypriot authorities.

In January 2014 former Conservative Party leader David Cameron, who served as Prime Minister from 2010 to 2016, and current Greek Cypriot leader Nicos Anastasiades signed a deal to allow “increased flexibility” to develop private property within the SBAs to help boost investment and growth.