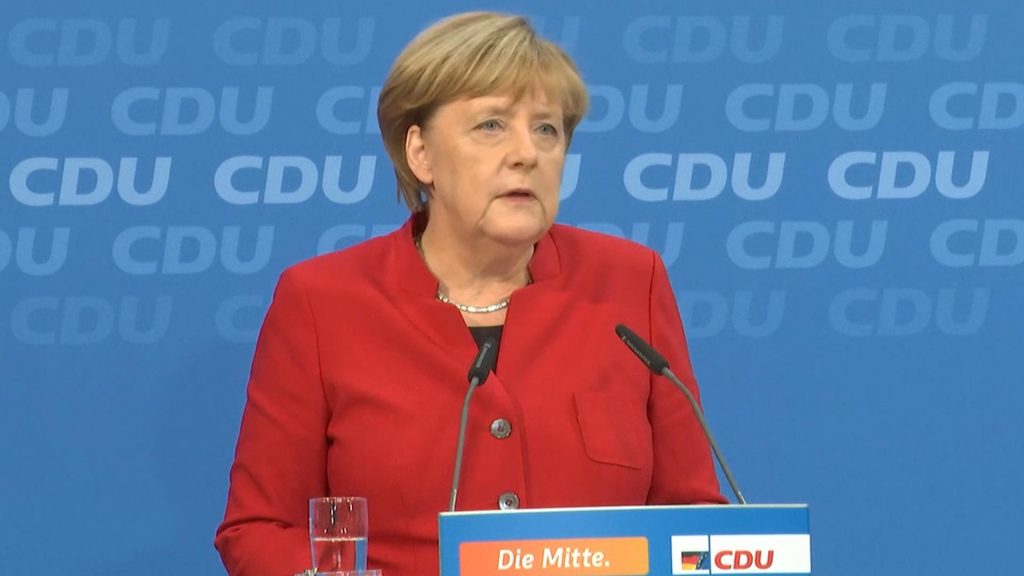 Angela Merkel has agreed to limit migrant numbers entering Germany to 200,000 annually in order to appease allies in coalition talks after a poor showing in last month’s general elections. Despite winning the most votes, Merkel’s conservative Christian Democratic Union (CDU) and its Bavarian sister party the Christian Social Union (CSU) took a bruising from the electorate, losing 8.5% of the vote share and 65 seats in the German Parliament or Bundestag.

Merkel announced that the pair will enter talks with other parties united at a press conference with CSU leader Horst Seehofer on Monday. “We achieved a joint result which I think is a very, very good basis to go into exploratory talks” said Merkel according to Reuters.

The agreement comes after divisions emerged in the conservative camp when the CSU, which leans further right than the CDU, set out to re-gain voters lost to the anti-migration and nativist Alternative for Germany (AfD), making a fixed upper limit on migrant numbers a condition for joining any government. The AfD performed well at the polls seeing its candidates enter the Bundestag for the first time, gaining third place with 12.6% of the vote and 94 seats.

As Merkel looks to start her fourth term as Chancellor and form a new government, a fragile coalition with the pro-business Free Democrats (FDP) and the left-wing environmentalist Greens, both of whom made gains, appears to be a likely scenario. This comes as Merkel’s main rivals and former coalition partners the centre-left Social Democratic Party (SPD) — led into the election by Martin Schulz — immediately ruled out continuing the previous arrangement with the CDU after forfeiting 40 seats in a crushing defeat at the polls.

The arrangement has been branded a “Jamaica coalition” because the participating parties’ colours would match those of the Jamaican flag including black for the CDU-CSU, yellow for the FDP and green for the Greens. “Let things play out. There will be a way,” said senior CDU politician Wolfgang Schäuble last week according to Germany’s DW news outlet. Such a deal is inevitable, as “we need a stable government for our country” he added.

Özdemir, himself the son of a Turkish guest worker, added that his party supported immigration laws detailing clear criteria, swift and fair migration processes for new arrivals and adequate integration measures. The Green position is set to put the party at loggerheads with the CSU which is unlikely to back down in the face of a growing threat from the AfD.

In recent times the AfD has made significant gains at the expense of both conservative parties, even knocking the CDU into third after state elections in Chancellor Merkel’s home region of Mecklenburg-Vorpommern last year. The party used anti-Islamic rhetoric in its general election campaign with slogans including “Burkas? We support bikinis” and “Stop Islamisation, choose AfD”.

Members of Germany’s 3 million plus Turkish-origin community have been targets of similar rhetoric previously; the leading AfD politician Alexander Gauland once controversially stated that high-profile SPD figure and former Integration Minister Aydan Özoğuz could be “disposed of in Anatolia”. The party has also denounced “as degrading” a 2016 deal aimed at stemming the flow of irregular migration into Europe in which the EU agreed to give an initial €3 billion to Turkey to accommodate Syrian refugees and made the additional promise of visa-liberalisation for Turkish citizens to travel in the Schengen Zone.

Both the AfD and more extreme far right groups, such as Patriotic Europeans Against the Islamisation of the West, or PEGIDA, saw surges in support after Chancellor Merkel accepted hundreds of thousands of migrants and refugees from the Middle East, Asia and Africa into Germany in 2014 and 2015. PEGIDA has attracted thousands to its anti-immigration rallies across the country where expressions of anti-Islamic sentiment have included the painting of the German flag onto crosses.

Despite the fierce backlash and political cost, Merkel told the German newspaper Die Welt am Sonntag in the leadup to the elections that she did not regret her decision. “It was an extraordinary situation and I made my decision based on what I thought was right from a political and humanitarian standpoint” she said.