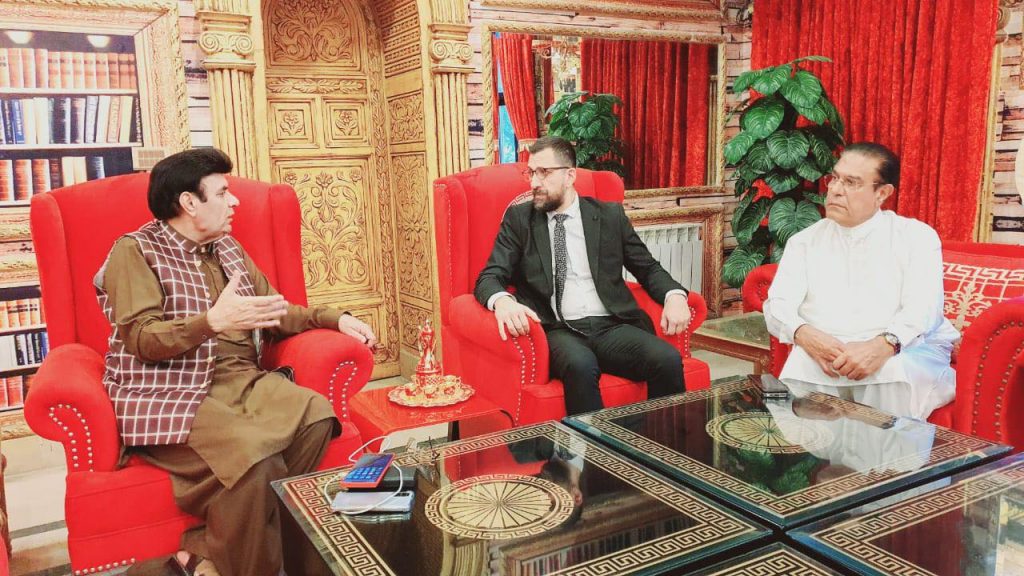 Two visionary Turkish Cypriot entrepreneurs have paved the way for investment worth $200 million from Pakistan into the Turkish Republic of North Cyprus (TRNC).

Mustafa Abitoğlu and his business partner Ahmet Gürün secured the investment pledges during a week-long series of meetings with business leaders, politicians and prospective investors in Pakistan last month.

Abitoğlu, a well-known media commentator who is also behind the Siberia frozen foods brand, and his business partner and marketing consultant Gürün, formerly the marketing director of TRNC firm Intergaz, are determined to open new commercial doors for TRNC businesses.

They travelled to Pakistan on TRNC passports, holding meetings in the capital Islamabad and Lahore – the country’s second largest city – between 13 and 20 March.

The pair were hosted by Liaqat Hussain Najmi, a Pakistani businessman who is married to a Turkish Cypriot. Najmi has extensive business interests in Pakistan, North Cyprus and the Middle East, and is responsible for the deal that brought Turkish Cypriot ice cream and café brand Mardo to Pakistan.

According to Abitoğlu, L.H. Najmi has been working as an “unofficial ambassadorial role” for over 25 years, constantly seeking to foster greater commercial ties between the TRNC and Pakistan and the Gulf countries.

One of the most significant investors Abitoğlu and Gürün were introduced to through Najmi is Shahid Zeb, the chairman of the board of Red Sun Associates – a leading property developer and investor in Pakistan.

Zeb, who has previously been courted by Greek Cypriots, is seeking to make investments totalling $200 million in North Cyprus. The TRNC tourism sector would be one of the beneficiaries, with a new holiday village among the projects being considered for the Eastern Mediterranean island.

Najmi also introduced Abitoğlu and Gürün to Sami Khan, chairman of the Tanawal Corporation, whose assorted business interests includes tourism. The connection could pave the way for a large new stream of tourists to North Cyprus.

Mr Khan has travel agencies across Pakistan and will also be visiting North Cyprus in May with a view to establishing links with the TRNC tourism sector. Abitoğlu and Gürün are already busy lining up meetings with TRNC government officials, the Turkish Cypriot Travel Agencies Union and Turkish Cypriots Hoteliers Union.

Pakistan’s population of 230 million makes it the world’s second largest Muslim majority country. Since gaining independence from the British in 1947, the country has been a close friend of Turkiye and Turkish Cypriots.

Historically, the Pakistani diaspora in Britain was instrumental in helping to raise vital aid for Turkish Cypriots when tens of thousands of them were displaced from their homes in Cyprus when they came under attack from Greek Cypriots in a conflict that ran from December 1963 to August 1974.

Along with Bangladesh and Turkiye, Pakistan was one of three countries to recognise the TRNC when Turkish Cypriots declared their independent state on 15 November 1983. Western pressure meant Bangladesh and Pakistan were subsequently forced to withdraw their recognition, but relations while informal, remain very positive.

“It is important for Turkish Cypriots to understand – and I really want to underline the fact that our Pakistani brothers and sisters are wholeheartedly ready to embrace us. We just have to increase our efforts to show up and introduce ourselves, tell them about our beautiful country and culture, and explain the opportunities that await them in North Cyprus. I’ve experienced first-hand how receptive they are”, Abitoğlu said.

Contrary to what many people in North Cyprus believe, TRNC passports are accepted by Pakistan. While a visa is required, this is a “simple formality”:

“Turkish Cypriots can apply online and pay $25. It’s a two-step process, a simple formality that takes no more than 10 days in total to complete,” Abitoğlu explained.

Abitoğlu and his partner Gürün want to use their combined business experience and contacts to assist Turkish Cypriot businesses seeking investment, trading opportunities and partners abroad.

Starting with Pakistan, the pair will be looking to develop market intelligence, networks and know-how to pave the way for increased international trade for the TRNC.

“The TRNC economy is in a bad way, and our country is not well managed. But with concerted effort and investment, we can transform our society for the better,” insisted Abitoğlu, who is behind the Vizyonerler Kulübü (Visionaries Club, later known as Vizyon Meselesi/Vision Matters), where he has interviewed diverse Turkish Cypriot pioneers from technology entrepreneur Ahmet Bilgen to inspiring mountaineer Birkan Uzun, who tragically lost his life in December 2021 in a skiing accident.

One of the big concerns for claims Abitoğlu and Gürün is the lack of awareness and action by the TRNC Government and specifically the TRNC Foreign Ministry in cultivating international trade opportunities.

The TRNC Representative Office in Pakistan is currently staffed by two Turkish Cypriots, which is “wholly inadequate”, claims Abitoğlu.

“We are on the cusp of a new and exciting era with Pakistan and we need our diplomatic representation to be ready to develop this interest. Currently, the team led by Dilşad Şenol can barely cope with consular demands. We urgently need a Commercial Attache to be appointed too. Pakistan is vast and our visit shows their business community are eager to learn about investment opportunities in North Cyprus,” Abitoğlu told T-VINE.

“The TRNC Foreign Ministry is badly out of step with the needs of contemporary Turkish Cypriot society and is far too passive. While we are happy to help forge new commercial ties for the TRNC, it should be the duty of the government, and specifically the Foreign Ministry’s overseas representatives to lead on organising international trade delegations and work with other TRNC ministries and NGOs to entice investors to the TRNC,” he added.