No apology from Greece’s Archbishop Ieronymos for his “Islamophobic” comments 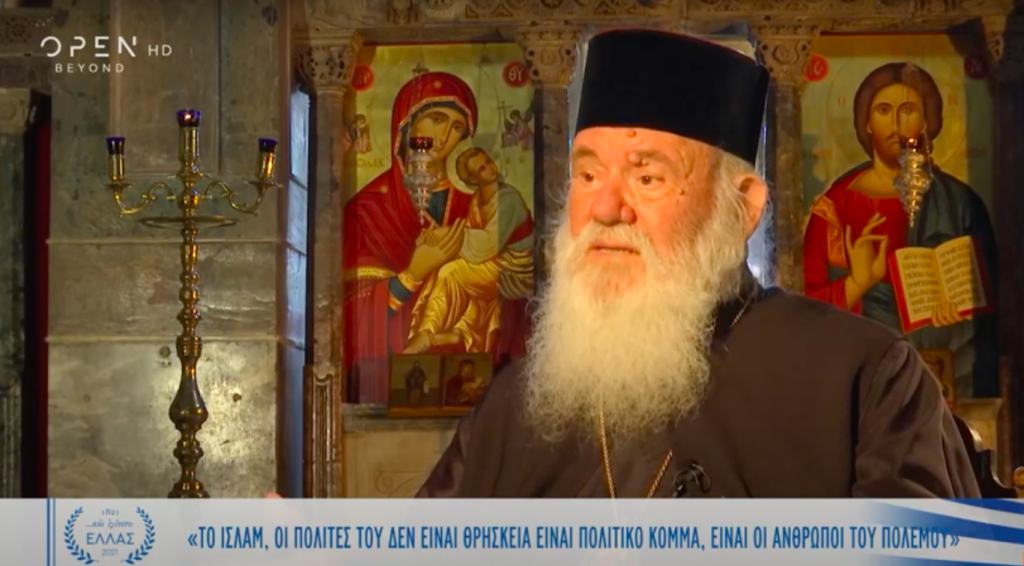 Greece’s top cleric Archbishop Ieronymos has sought to clarify his comments after being heavily criticised for claiming that Islam is a “political movement” and its adherents a “people of war”, but he stopped short of apologising for the offence caused.

The Orthodox Archbishop of Athens and All Greece made the controversial comments while speaking on the Open TV channel at the weekend about the role of the Orthodox Church in the Greek Revolution of 1821 against Ottoman Turkish rule.

During the interview, Archbishop Ieronymos said: “As we know, Islam is not a religion but a political party and political quest, and [it’s believers] are people of war, of expansion.

“That is a characteristic of Islam, it is also mentioned in the teachings of Muhammad. Therefore the Conqueror saw the needs that emerged: how he would govern; how he would collect taxes; and mostly how he would unify all these people under his rule,” the archbishop added.

The archbishop was referring to Fatih Sultan Mehmet II, also known as the Conqueror, after he captured the Orthodox capital Constantinople (modern day Istanbul) in 1453.

“This kind of discourse aiming to marginalise Muslims feeds the racist perspective against them, and leads to attacks on their lives and places of worship”

Archbishop Ieronymos’ descriptions of Islam and Muslims drew a furious response from the Turkish government and senior community and religious figures in Turkey and Greece.

Ali Erbaş, Turkey’s Head of Religious Affairs (‘Diyanet’) said “the Christian world must oppose this sick mentality. This kind of discourse aiming to marginalise Muslims feeds the racist perspective against them, and leads to attacks on their lives and places of worship.”

Turkey’s Foreign Ministry also condemned the comments in a press statement on Monday:

“These provocative expressions of Archbishop Ieronymos, which incite society to become hostile and violent towards Islam, also shows the frightening level Islamophobia has reached.”

The Xanthi Turkish Union – an organisation representing Greece’s Turkish minority in Western Thrace – described the archbishop’s comments as an “Islamophobic attack” and “a hate crime”.

(1/2) We condemn the statement of the Archbishop of Greece, Mr. Ieronimos, “Islam is not a religion but a political party and a quest, and the believers are of people of war”.

The Association of Western Thrace Minority Higher Education Association (BTAYTD) said the archbishop’s remarks have ‘no relation to any theological or historical facts’. Their statement also said:

“We would also like to point out that the expression of such an idea by a clergyman, who is in an important and critical position, really upset and confused us”.

The archbishop’s comments were also condemned by the Western Thrace Turkish Minority Advisory Board. In a series of tweets, the body said, “We condemn the statement of the Archbishop of Greece, Mr. Ieronimos, “Islam is not a religion but a political party and a quest, and the believers are of people of war”, while urging that “a more peaceful language to be used instead of anti-islamic discourse in such difficult times of pandemic.”

In response, the Archdiocese of Athens issued a press release stating that Archbishop Ieronymos’ comments had been misconstrued, and that he meant “nothing more than the perversion of the Muslim faith by a few extreme fundamentalists who sow terror and death around the world.”

The statement also added that, “The Archbishop and our Church respect in practice all the known religions,” it added. “Furthermore, the example of the peaceful and harmonious coexistence of Christians and Muslims in Thrace confirms this to us in the clearest way.”

İsmail Şerif: “We expect the Archbishop to declare an apology”

But nothing short of an apology will do, according to İsmail Şerif, the Mufti of Gümülcine (Komotini) in northeast Greece. The influential cleric told media:

“It really upset us that the person who spoke these words was a cleric and head of the Orthodox Church in Greece.

“We, as clergymen, need to work towards making people of various religions and ideas live together and bring them closer to each other.

“We view this as hate speech, which makes people hostile towards each other and polarises people. These statements made us sad not only as Muslims, but also as a human being.

“We expect the Archbishop to declare an apology, stating that this issue was misunderstood and that he could not express what he wanted to say. Because if he does this, between 800,000 and 1 million Muslims live here in Athens.

“As Muslims in Western Thrace, we constitute almost half of the society. We do not want seeds of hatred sowed, but desire and demand that words that evoke brotherhood and friendship be spoken among these people. As Muslims, we always express this in our speeches in mosques. We expect such a statement from people of other religions.”

Main image, top, from YouTube of Archbishop Ieronymos, the Orthodox Archbishop of Athens and All Greece, when he appeared on Open TV on 16. Jan. 2021