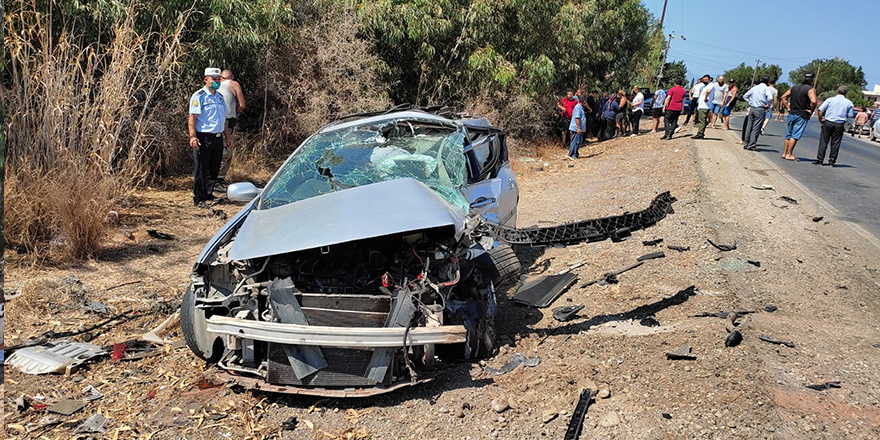 Data released by police in the Turkish Republic of North Cyprus show that a total of 134 people have lost their lives in 121 fatal road traffic accidents that occurred between 1 January 2018 and 6 September 2022. There have been 15 deaths in a little over eight months in 2022 alone.

In a report by TRNC daily Yenidüzen, between 01 August and 4 September 2022 there were a total of 318 accidents . Of these, one person died, while 94 people were injured and required hospital treatment .

The top four causes for accidents were as follows:

Driver 8 times over the alcohol limit

Despite horrific consequences, drivers in the TRNC continue to drink and drive. At least five accidents in August were down to drivers getting behind the wheel when they were over the alcohol limit, causing injury to eight people in the ensuing crashes.

The legal limit in the TRNC is 49 milligrams of alcohol in every 100 milligrams of blood. Yet the Yenidüzen report lays bare the scale of the problem, with alcohol levels for all five drunk drivers involved in crashes between 1 August and 4 September 2022 being considerably higher, with one driver testing eight times over the limit!

In February of this year, the TRNC announced its revised penalties for a host of driving offences, including speeding and driving over the limit.

Those “driving or attempting to drive on any road or in any place if the alcohol level in the blood of the driver is between 50 milligrams and 100 milligrams” will be fined 3 thousand 500 TL, and receive 100 penalty points, which means they lose their driving licence for 3 months.

Shockingly, the penalty does not vary much for those who are found to be more than two times over the legal limit to drink drive.

People who are “driving or attempting to drive on any road or anywhere by drinking alcohol even though the blood alcohol level of the vehicle driver exceeds 100 milligrams” will be fined a month’s minimum wage, (7 thousand TL back in February), and also given 100 penalty points that again only equates to a 3 month driving ban.

The penalties for speeding, which is the number one cause for road fatalities in the TRNC, are still woefully low.

A person who is convicted of being up to 20 kilometres over the speed limit will pay a fine of 700 TL and receive 5 penalty points.

Drivers who exceed the speed limit by between 20 km and 40 km will have to pay 1,500 TL, and have a 25 penalty point endorsement on their licence.

Those found to be speeding by more than 40 km are fined a paltry 1,750 TL, and receive a 50 point penalty. For a driver to be banned from driving in the TRNC, they need 100 penalty points.

All penalty points are wiped after a period of 15 months. A person who hits the maximum 100 points in automatically banned from driving for 3 months.

Drivers who reach 100 points for a second time will lose their licence for 6 months. A person who receives a third penalty of 100 points will be banned from driving for a year. There is no compulsion for them to re-sit driving tests.

TRNC courts have started to impose higher jail sentences for drivers involved in fatal road accidents. A driver, Goodluck Osakpolor Ogbebor, was jailed for six years in May after he was convicted of causing death while under the influence of drink and drugs.

Ogbebor, who is originally from Nigeria, was found to be twice over the legal limit, with 98 milligrams of alcohol in his blood when he lost control of his car on a bend on the main Yakın Doğu Bulvarı in the capital in Lefkoşa in the early hours of 17 November 2021. His car overturned, and his passenger and fellow Nigerian national, Odion Maureen Paulınus, 36, was killed in the crash.

Another drunk driver, Zamir Dereseven, 20, was given a jail sentence of 5 and a half years for careless driving following another fatal road traffic accident in Lefkoşa last year.

Dereseven, who is a resident of Dikmen, had 84 milligrams of alcohol in his blood when he was tested. The driver had lost control of his car at a bend, also on Yakın Doğu Bulvarı, just after midnight on 13 October 2021, crashing into cyclist Teoman Telek. Telek, aged 45, was taken to hospital but despite medical efforts, he died a short time later.

Comparable offences in the UK would generate far stiffer penalties, that can range from an automatic driving ban for between 1 and 3 years for being over the alcohol limit to, fines from £2,500 for first offences to unlimited fines, and up to 6 months imprisonment.

Speeding penalties in the UK are also stronger, with the mildest speeding conviction resulting in a £100 fine and 3 penalty points (from a maximum of 12 points, which is an instant disqualification), which remain on a driver’s record for 3 years after the date of conviction. Penalty points for more serious offences will remain on a person’s record for 10 years.

Drivers in the UK convicted of causing death through careless driving, including those found speeding or driving under the influence of drink, also face a long jail sentence. Drivers convicted of these types of offences would face up to 14 years’ imprisonment, as well as an unlimited fine, a ban from driving for at least 2 years, and an extended driving test before their licence is returned.