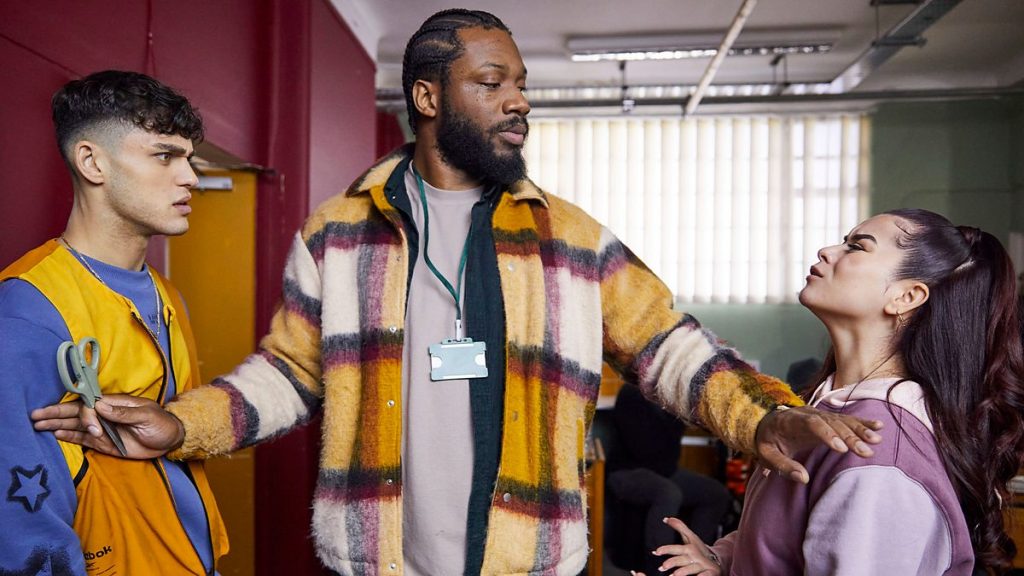 PRU is a BBC Three comedy series revolving around four teenagers Halil, Jaeden, Sienna and Belle who find themselves navigating through the trials and tribulations of teen life in a Pupil Referral Unit, or PRU for short, under the guidance of two teachers, who are more like the parental figures these kids need.

Think of an exaggerated comedic version of the hit German teen drama DRUCK with a truckload of British slang, and you might land on PRU.

The use of music is pretty similar in setting the tone, as both shows follow the daily lives of high school students in close-up. But another cool similarity is the visibility given to Turkish characters.

Halil, one of the teen leads, is portrayed by British Turkish Cypriot actor Jaye Ersavaş. His on screen parents are Fisun Burgess and Ümit Ulgen, and can also be seen conversing in Turkish with a Cypriot accent as they discuss their son Halil in various scenes.

Ersavaş’s heritage plays a central role on his character as Halil. He uses his dad’s language barrier to get away from certain issues, lets out Turkish exclamations when giving his reactions and even sports a Turkish military uniform for a camping trip.

This authentic Turkish character, free of the pigeonholing grasp of Western media, is right in our faces. Hopefully, we will get to see more non-stereotypical onscreen representation of Turks going forward.

This first BBC series comprises of four episodes, each one an easy-to-digest comedy with a laidback vibe that teenagers and young adults can especially relate to.

PRU’s clear-cut focus on modern day adolescent experiences under the guise of a comedy show is a brilliant idea coming from youth-driven production company Fully Focused.

You could say PRU is like those old 90s shows for young people or a typical Disney channel series where you learn a new life lesson in every episode.

Though the characters may come off as having overly theatrical personalities, it’s a pretty spot on representation of teenagers. The show explores the world, and the system we live in, while facing expectations. It helps young people find their own voices, as well as focusing on some dumb teenage stuff at times, like all of us have at that age.

Overall, PRU accomplishes in making viewers empathise with these kids who are often ostracised by society.

Alongside teenage viewers, this is also a great show for the older generations, especially parents, to watch so they can understand what resonates with teens. It gives an important insight into what those excluded from school go through and worry about these days.

You can watch the entire first series of PRU on BBC iPlayer – click here to see.