Ottoman art at Christie’s Islamic Art Week, on till Oct. 25

This week Christie’s  – London’s premier auction house – reminds us of the cascade of beauty which Islam has given to the world. Its series of Islamic-themed sales are from a galaxy of different Muslim civilisations spanning a thousand years.

No art-form exists which has not been carried to sublime heights in the service of Islam, and many of the classic examples are naturally from Turkey.

Whether you are interested in superb examples of jewellery, metalwork, pottery, weaving, scientific instruments, beautiful manuscripts or weapons produced by your culture, the lots simply cry out to be seen beforehand.

The good news is entrance to the pre-sale viewings at Christie’s, currently celebrating its 250th anniversary, in its three salesrooms in King Street, St James’s and South Kensington, is absolutely free.

See Lot 149, for example: a beautiful Iznik pottery dish dating from about 1570, appearing in October 20th’s sale of Art from the Islamic and Indian Worlds. It is just one of a group of nine, representing the flower of an art form which still earns Turkey millions of pounds today. It could make £30,000.

The same sale includes Lot 138, a beautiful calligraphic variation on the traditional tuğra, the Sultan’s official seal which was fixed to all correspondence. This example, dating from around 1570, could fetch £20,000.

Lot 147 is a handsome Ottoman gilt-copper zam-zam ewer from the 18th century, which still retains a lot of its original gilding, estimated at £4-6,000.

The climax of the sale, Lot 184, is a wonderfully-illustrated Ottoman prayer-book estimated at £80,000, but there are many other impressive Turkish artworks before the final hammer falls.

For instance, at Lots 160 and 161 we find an Armenian silver bowl and another depicting Christ’s Twelve Apostles, both of which show that the Ottoman rule was usually a benign system, within which many non-Muslim faiths prospered.

Tuesday October 18th’s Oriental Rugs and Carpets sale includes several magnificent examples from different parts of Anatolia  (Turkey) including the jewel-like Lot 57, described as “possible Fethiye, circa 1800”, as well as many lots from Persia and even distant China. It also has zam-zam ewers woven into it. Can you find them? 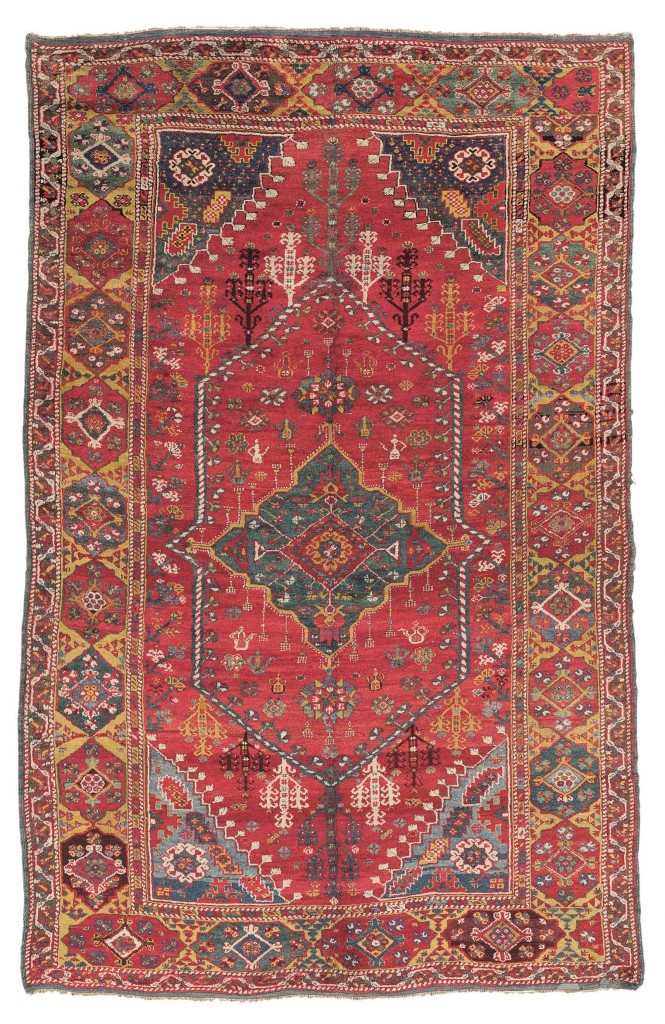 Some of these – such as Lot 59, a  commentary on the  Greek mathematician Euclid – are an important reminder of the fact that many ancient Greek and Roman writers have only come down to us through Muslim scholars who translated them, enabling them to become the foundation of Europe’s Renaissance.

Altogether, this fascinating and fact-packed celebration of Turkish arts and crafts is not to be missed. All these lots can be found fully illustrated online. For further details contact Christie’s, directly on 0207 839 9060.

All images reproduced with permission from Christie’s Images LTD. 2016