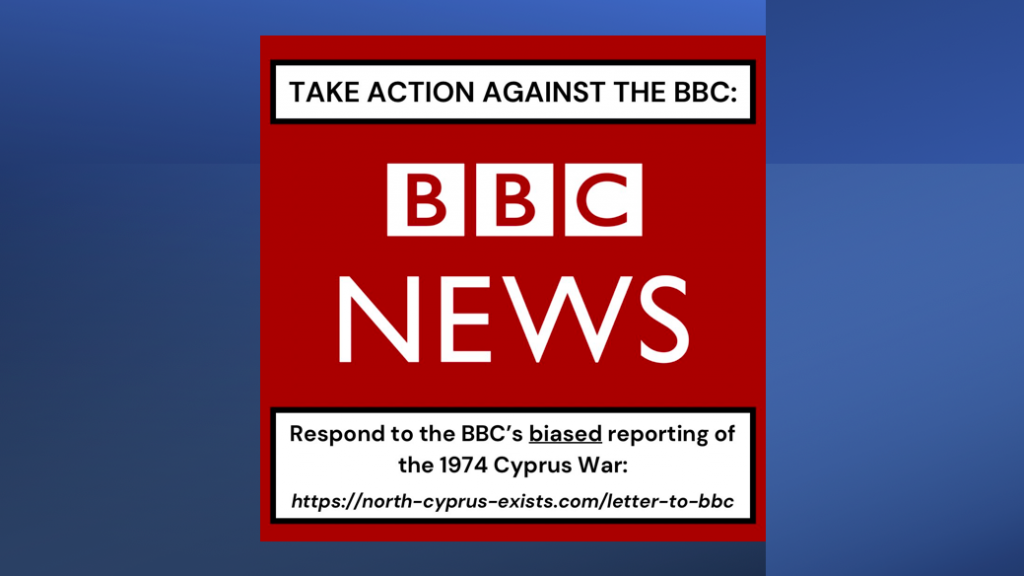 A campaign to protest the BBC’s one-sided, anti-Turkish coverage of the 1974 War in Cyprus on Monday has seen over 500 people write in to complain to the broadcaster in 24 hours.

An online template letter, jointly produced by two British Turkish Cypriot activist groups, North Cyprus Exists and Young Turkish Cypriots (Y.T.C.), has been signed and sent to the BBC by over 500 people, a spokesperson for the groups told T-VINE.

The letter, given in full below, criticises the way the BBC depicted the 1974 war, which was the culmination of a ten year period of conflict between Greek and Turkish Cypriots that saw thousands of Cypriots displaced, and hundreds murdered or missing.

Despite the British capital being the home of tens of thousands of Cypriots from the island’s diverse communities, BBC London chose a single story to cover this sensitive anniversary. It broadcast on television and online a 3-minute interview with Baz Bedrossian, a Cypriot believed to be of Armenian extraction, who explains his memories of Cyprus 48 years ago, when he was aged nine. The clip starts with him saying: “I’m Baz, I came to London in August 1974, following the Turkish invasion of Cyprus.”

While no one disputed Baz and his family’s right to tell their story, Turkish Cypriots were severely irked by the BBC’s one dimensional approach that framed the issue using an anti-Turkish narrative.

The language, that is standard with the BBC’s other news stories on the Cyprus conflict, again vilified Turkiye by describing as an “invasion” its lawful intervention in Cyprus 1974. It failed to give any significant context to this tragic period, including that the conflict had been running for a decade and that Turkish Cypriots welcomed the arrival of Turkish forces for liberating them from a decade of persecution.

The nine-year-old boy that fled Cyprus in August 1974 and made London his home. 48 years ago Baz and his family arrived as refugees, following the second Turkish invasion of Cyprus, and have since made a life for themselves in the capital.

Hundreds of Turkish Cypriots took to social media to vent their fury at the BBC’s latest biased news coverage on Cyprus, prompting North Cyprus Exists and Y.T.C. to launch a joint action “to ensure the community’s anger and views were heard by the BBC”, T-VINE was told.

The template letter, now with a version for non-Turkish Cypriots to sign, accuses the BBC of “revisionist history” on Cyprus. Among the demands made are for the BBC to change its terminology about the Cyprus conflict, and to “revisit and present more accurate facts and ensure the Turkish Cypriot viewpoint is always represented” on issues where Turkish Cypriots “would rightly expect to be seen and heard.”

On Monday, 15 August I saw the BBC London clip broadcast about Baz and his family leaving war-torn Cyprus in 1974 for a new life in Britain.

It’s great to see the BBC put the spotlight on these matters, but as a person of Turkish Cypriot heritage I was concerned that there was no comparable story from our community? Why was that? Does the BBC not have a responsibility to present a balanced account of such historic events?

URGENT CALL TO BRITISH TURKISH CYPRIOTS – in just a few clicks you can send this pre-populated email to the BBC and complain about their biased reporting on the events that took place in Cyprus in 1974. – https://t.co/aUKw8hvgN2 #bbcnews #TurkishCypriotsExist pic.twitter.com/9DKGJ8zSnX

I would also take issue with the BBC’s continued use of the term “invasion” in relation to Turkiye’s actions in 1974. This word vilifies Turkiye, and is poor journalism as, under the 1960 Treaties that established the Republic of Cyprus, Turkiye had a legal and political mandate to intervene in Cyprus as one of three Guarantor Powers. And thankfully they did intervene as they saved Turkish Cypriot families like mine from certain annihilation.

The BBC has a duty to present history and the news impartially. By constantly putting the emphasis on the Greek Cypriot trauma of 1974, and failing to state that the Cyprus conflict started in December 1963 – not July 1974! – and by also erasing out the decade of brutal oppression that Turkish Cypriots faced amounts to a massive distortion of the facts around the Cyprus conflict.

Such revisionist history should play no part in any credible media, especially the state broadcaster of Britain!

Turkish Cypriots are tired of the BBC’s anti-Turkish bias on Cyprus. It’s about time this changed!

Please change the terminology, revisit and present more accurate facts and ensure the Turkish Cypriot viewpoint is always represented when you cover the Cyprus conflict and other Cypriot issues where we would rightly expect to be seen and heard.

The letter can be accessed online via the Take Action section of the North Cyprus Exists website.

The BBC have been approached by T-VINE for comment.