A newly elected councillor for the North London Borough of Enfield has been suspended by his local Conservative Party pending an investigation following hateful posts about Turks on Facebook.

On 20 July, Stephanos Ioannou, a councillor for Southgate, shared the controversial 1974 front page of The Sun, which labelled Turks ‘barbarians’. Cllr Ioannou’s posts, made on the 44thanniversary of Turkey’s lawful intervention in Cyprus, appeared on both his personal and official councillor pages, incensing the British Turkish community.

Many took to social media to vent their anger at the Conservative councillor’s inflammatory posts, claiming he was“inciting hatred”,while others wrote directly to Cllr Joanne Laban, the leader of the Conservative Group at Enfield Council, to complain about his behaviour.

Ayla Emine to Cllr Ioannou: “Shame on you for inciting hatred. You shouldn’t be a Councillor if you are racist against a group of people!”

Ayla Emine M., a local resident of Turkish Cypriot heritage, was among those to complain to Cllr Ioannou, sending him the following message:

“Shame on you for inciting hatred. You, as an Enfield Councillor should be encouraging unity and community cohesion NOT causing ill feelings amongst your constituents by posting lies and propaganda published decades ago and which, incidentally, were retracted by The Sun at the time. If you want people to know the truth why don’t you publish what happened on BOTH sides!

“Turkish Cypriots suffered systematic ethnic cleansing and brutality for years by Greek EOKA which caused Turkey to eventually INTERVENE to save the Turkish Cypriots and NOT INVADE as you like to paint it.

“You’re disgusting and I will be reporting you to your party leader and Enfield Council. You shouldn’t be a Councillor if you are racist and prejudiced against a group of people!” 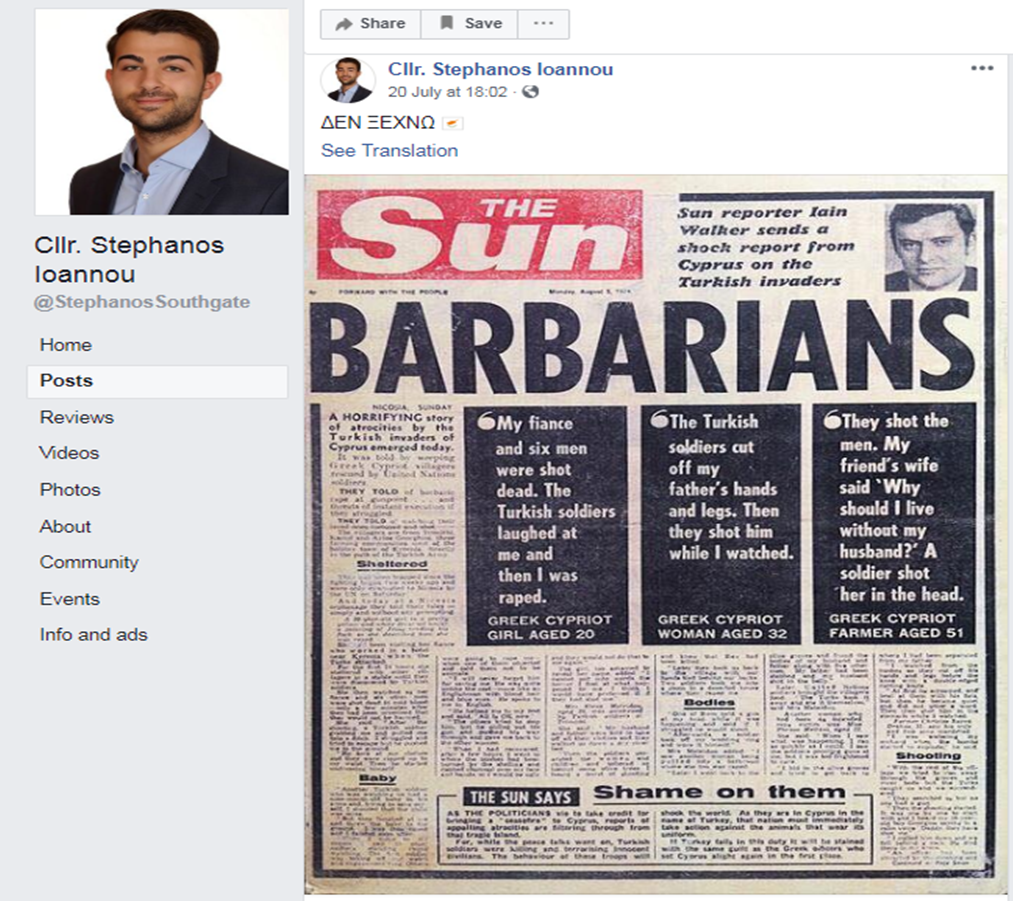 T-VINE contacted Cllr Joanne Laban about Cllr Ioannou’s offensive posts, which at the time of writing, remain on both his personal and councillor Facebook pages. The Enfield Conservative head told us by email:

“The Conservative Party takes this very seriously. Cllr Ioannou is currently suspended pending the outcome of an investigation.”

North London is the common home to thousands of Greek and Turkish Cypriots. The suburban London Borough of Enfield has the UK’s largest Turkish community, with an estimated one in five residents having roots from either Turkey or North Cyprus.

“The Conservative Party takes this very seriously. Cllr Ioannou is currently suspended pending the outcome of an investigation”

Of Greek Cypriot heritage, first-time councillor Ioannou is also the current chair of the Conservative Friends of Greece. He came second in Southgate at the recent Local Elections and is the only Conservative candidate to be selected for the ward. He won with 1,809 votes, tying with Labour’s Derek Levy in the tightly fought contest with both receiving just six votes more than fourth-placed Angie McEvoy, a Labour candidate.

The provocative front page shared by Cllr Ioannou from The Sun dates back to 5 August 1974. Its “Barbarians” headline and claims about so-called atrocities committed by the Turkish army caused uproar at the time and resulted in mass protests by Turkish Cypriot women outside the premises of the newspaper. The tabloid, not renowned for its quality journalism, subsequently published an apology for its racist headline and story.

Ten days after The Sun’s sensationalist front cover story, the mass slaughter of Turkish Cypriot civilians was discovered in Famagusta by the United Nations. Women and girls who had been repeatedly raped, young children and the elderly from Muratağa/Maratha, Sandallar/Sandalaris and Atlılar/Aloa were found mutilated and buried in mass graves. A further massacre of 85 Turkish Cypriot men was discovered in Taşkent/Tochni, in Larnaca. The killings were described by the UN as ‘crimes against humanity’ and in 2016 led to an apology by former Greek Cypriot Foreign Minister Erato Kozakou-Marcoullis.

The Cyprus Conflict, which ran from December 1963 to August 1974, saw both communities suffer. A third of Greek Cypriots were displaced after the 1974 War, while half of all Turkish Cypriots were forced from their homes, some becoming refugees three times over during the 11-year conflict. Despite repeated efforts by the international community, the island remains divided.