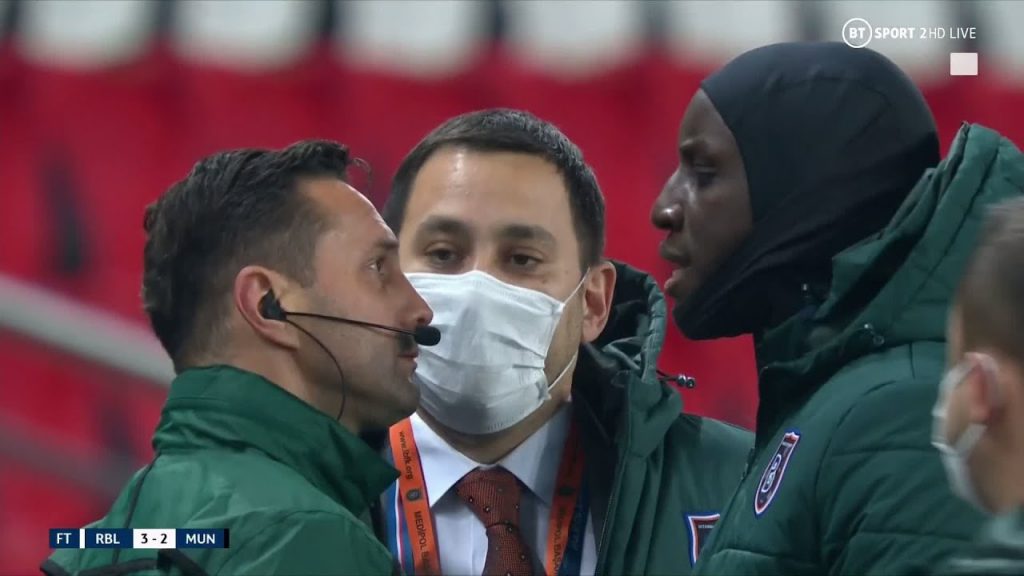 The UEFA Champions League match between Paris-Saint German (PSG) and İstanbul Başakşehir was suspended after players from both teams walked off in the 14thminute following an incident involving one of the match officials.

Sporting body UEFA is investigating after the Turkish club accused the fourth official of using a racially demeaning remark during the sending off of the club’s assistant coach Pierre Webo.

The matter came to a head when Başakşehir substitute player Demba Ba challenged the fourth official after hearing the way he described Webo, who is from Cameroon.

When the referee asked the fourth official Sebastian Coltescum which person he is sending off, Coltescum allegedly responded with “the black one”.

In an audible clip, replayed on television, Ba confronts Coltescum telling him, “You never say ‘this white guy’, you say: ‘these guys’.”

Ba continued, “So, listen to me, why when you mention a black guy, do you have to say, ‘this black guy’?”

Coltescum, who is Romanian, tried to defend himself to the Senegalese striker about his use of the word “negru”, which is Romanian for black, but Ba was having none of it.

The former Newcastle United player led the Başakşehir players off the pitch, followed by those from PSG who showed solidarity with the Istanbul side over the issue.

UEFA tried to mediate a solution offering to replace the fourth official to help re-start the match, which had been poised 0-0 when the players left the pitch.

While PSG were prepared to resume the game, the Başakşehir players did not emerge from their dressing room and Tuesday’s match was eventually abandoned.

UEFA subsequently announced the game would be resumed the following day from the 14th minute, which is the point when the game was suspended on Tuesday evening. The restart will kick off at 5.55pm on Wednesday, 9 December.

A statement issued by UEFA read: “Following an incident at tonight’s UEFA Champions League match between Paris Saint-Germain FC and Istanbul Basaksehir FK, UEFA has – after discussion with both clubs – decided on an exceptional basis to have the remaining minutes of the match played tomorrow with a new team of match officials.

“A thorough investigation on the incident that took place will be opened immediately.”

Başakşehir issued a “No to racism” message via social media pages, which was quickly amplified by fans and supporters alike.

PSG also issued a statement that, “all forms of racism go against the values held by Paris St Germain and the club’s chairman, staff and players”.

The club’s star French striker Kylian Mbappé, whose father is from Cameroon, was one of many who showed solidarity with the Turkish side and specifically assistant coach Pierre Webo. Mbappé tweeted: “SAY NO TO RACISM [and three red crosses] M.WEBO WE ARE WITH YOU [and a raised fist emojey].

The Turkish President said on Twitter: “I strongly condemn the racist remarks made against Pierre Webo, member of the technical staff of Başakşehir, and I am convinced that UEFA will take the necessary measures.”