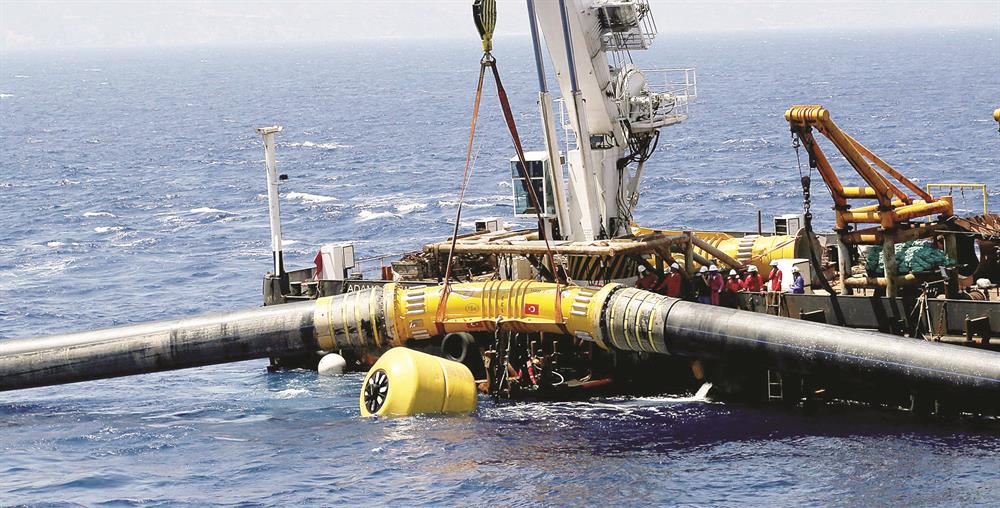 The final 500 metres of the pipeline that will transport fresh water from Turkey to Cyprus was laid on Friday, 7th August. Turkey’s Forest and Water Affairs Minister Veysel Eroğlu, who has overseen the $537m project since its inception, was among those to witness the last section of pipes to be assembled before being submerged underwater.

The pioneering pipeline, 107 km long, marks a global first in engineering due to its unique method of laying the underwater stretch of pipes – 80km in total – under the Mediterranean Sea. When fully functioning, the pipeline will draw water from Mersin’s Alaköprü Dam on the Anamur River and transport it to the Geçitköy Dam, just outside of Girne.

Dubbed Barış Suyu (Peace Water), this ambitious venture is set to officially open on 29 October this year and is expected to deliver 75 million cubic meters of water annually to the TRNC, meeting all of the water needs of Turkish Cypriots until 2050. Half of the water will be used for irrigation, the rest as drinking water.

The entire island suffers from a chronic water shortage, and it’s hoped the new Barış Suyu pipeline will benefit both North and South Cyprus in the years ahead.

One of Turkey’s greatest engineers Üzeyir Garih behind pipeline idea

The idea to deliver water to Cyprus dates back to the Turgut Özal era of the 1980s, when water bags were touted as a method. That was soon dismissed. In 1995, Üzeyir Garih – a businessman and one of Turkey’s leading engineers – suggested an underwater pipeline.

Garih’s company Alsim Alarko undertook a feasibility study. The promising results were presented to former Turkish Prime Minister Bülent Ecevit in 1999, who quickly became an advocate. However, it took over a decade before the plans became active.

In 2012, Prime Minister Recep Tayyip Erdoğan gave the green light for work to formally start. Alsim Alarko spearheaded the design and initial consultancy, identifying the suppliers who could successfully deliver on such a complex and unique project.

Firat Pipe – one of Europe’s biggest plastic manufacturers – was chosen to produce the specialist pipes. Detek Deniz Teknolojileri provided the digital tracking tools inside the pipes. Malaysian offshore contractor Sigor Ros and Turkey’s Kalyon İnşaat were charged with laying the pipes and constructing the onshore facilities to process the water, which included two dams and two elevation centres. The buoys used to hold the suspended pipeline in place were produced by Trelleborg Offshore at their manufacturing facility in Skelmersdale, in Lancashire, northwest England.

Barış Suyu is making history – never before has water been carried for such a distance using a suspended underwater pipeline. The innovative plans have captured global interest (the project is so unusual that it is being made into a documentary for the National Geographic Channel) and left engineers intrigued, especially as carrying water poses significantly different challenges to transporting subsea gas and oil.

Offshore pipelines carrying gas and oil are made of steel, and they usually rest on the sea bed at depths of up to 3,000 meters. The process is aided by the pressure and weight of the pipe, as well as the density of the oil and gas.

Fresh water is less dense than sea water and has a tendency to float. So instead of placing the pipes some 1,400 metres below sea level, the Barış Suyu engineers decided to create a floating structure for the 80km worth of underwater pipes.

The pipeline has been immersed some 250 metres below the surface (deep enough to avoid shipping vessels) and held in place by huge plastic buoys. There are 132 buoys in total, each filled with special chemicals to weigh them down, bound together by steel plates.

All the pipes were assembled on ships out at sea and then filled with water before being submerged. Along with carrying water, the “smart” pipes also contain enhanced technology allowing them to identify and locate any damage to the pipeline through their unique transmitters and sensors.

There have been few objections to the project as the environmental impact from a water pipeline leaking is far less than from oil and gas. However, questions have been raised about other dangers: is the floating infrastructure robust enough to withstand earthquakes that commonly occur in the Mediterranean region?

Engineers say they have undertaken significant risk assessments, with danger scenarios ranging from sinking vessels, to quakes and tsunamis played out, enabling them to put in place the necessary safety measures.

Instead of homing in on the opportunities from increased water supply on the island, most South Cyprus media chose to raise concerns about it. Some commentators have likened the new pipeline to an “umbilical chord”, suggesting the water will increase, not decrease, Turkish Cypriot dependency on Turkey.

A few, such as Haravgi and Althia newspapers, used their headlines to highlight that the ‘Peace Water’ could also benefit Greek Cypriots following a political solution.

While politicians congratulated those involved in successfully completing the pipeline, Kalyon İnşaat was less happy. Their vice-chair Abdulnasır Akıncı,told Hürriyet’s columnist Vahap Munyar that his firm has lost $100 million on the Barış Suyu project due to the devaluation of the Turkish lira, which is down by a third since Kalyon started work in May 2013.