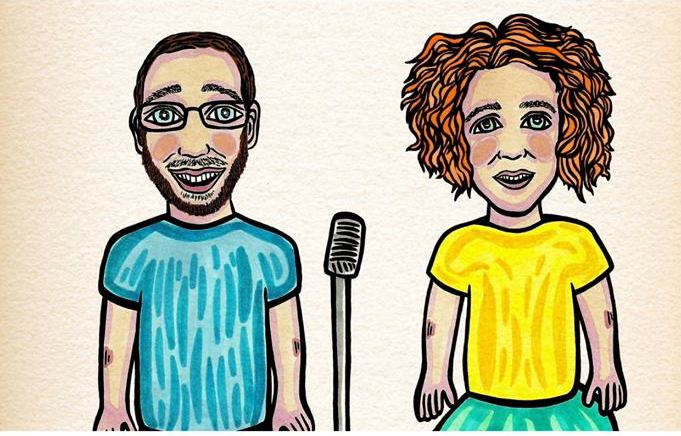 Saban’s Turkish Cypriot dad still doesn’t know he does stand-up. Sarah’s Czech grandmother knows she does it, but doesn’t know what it is.

Next weekend this newly paired comedy duo will perform the world premiere of their show at the Camden Fringe Festival.

During their hour-long comedy narrative, Comedy Store King Gong December 2014 winner Saban Kazim and Jewish Comedian of the Year 2014 finalist Sarah Sheldon will focus on life’s reckless choices: from hoovers to pieces of toast, and how children’s books can ruin your life.

Saban has been gigging regularly since 2010, performing at venues including The Comedy Store, The Comedy Cafe and The Backyard Comedy Club. A Laughing Horse 2014 semi-finalist, he is three times winner of The Comedy Cafe’s New Act night and played the main Kebab shop owner in You Me Bum Bum Train 2011/2012.

He is described by Shappi Khorsandi as “A very funny comic with lots of heart” and TNT comedy club’s Sarma Woolf as a, “Storyteller extraordinaire, infectious catchphrase deliverer and rising young comedy star”.

Sarah is a London-based writer and journalist who’s covered everything from the Lithuanian laxative market to presidential elections in Panama. Her humorous writing has featured as a series on the Illustrated Guide to Life blog. She began stand-up in 2012 and is the co-founder of Shake the Tree, a monthly comedy night in North London. She has performed at Rich Mix, Angel Comedy, and at the Manchester Women’s Comedy Festival.

Her fans include Cynthia Levin, who called Sarah, “A truly funny and honest voice on the London circuit”, and BBC Radio 4 producer Sarah Cuddon, who said she is, “Like a short, curly-haired, Jewish Alan Bennett.”

Saban and Sarah’s new show is part of the month-long Camden Fringe Festival, which this year celebrates its tenth anniversary. The performing arts festival takes place in various venues across the borough, allowing performers, both newcomers and old-hands, the chance to try out new material without requiring the same level of time and financial commitments as the far bigger Edinburgh Fringe.

Tickets for Saban and Sarah Do Stand-up are on sale now. Advance booking is advised as this intimate, award-winning venue seats just 42 people.

More info and tickets: camdenfringe.com  (need to create an account before you can buy tickets online)