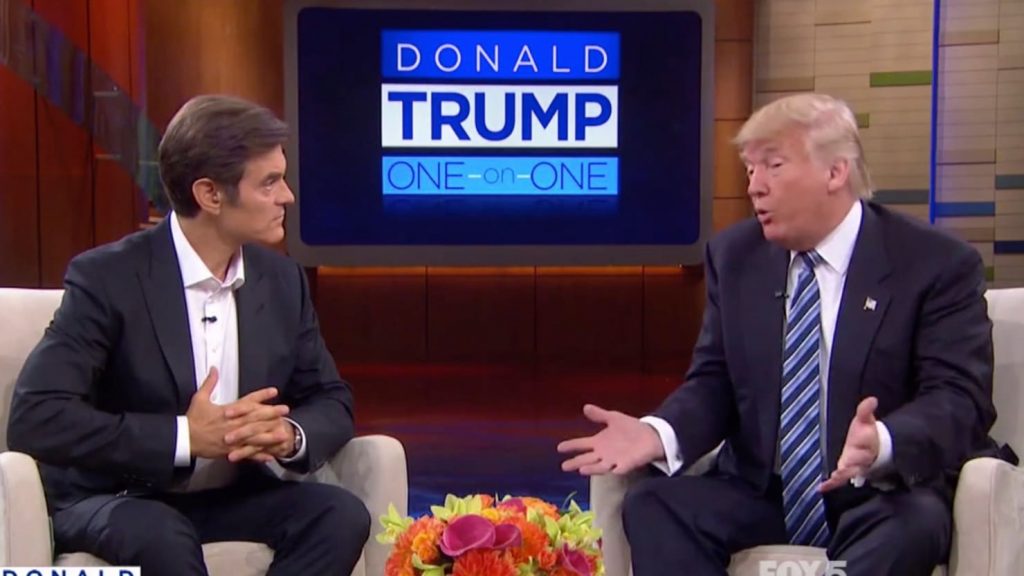 On Friday, the White House announced President Trump’s intentions to appoint a variety of renowned individuals to key positions in his Administration. Among the names was Mehmet Oz, better known as Dr. Oz, a cardiothoracic surgeon and TV personality whose show Donald Trump appeared on during the 2016 Presidential campaign.

Dr Oz is one of twenty nominees put forward to be Members of the President’s Council on Sports, Fitness, and Nutrition for a two-year term. Other advisers on President Trump’s list include New England Patriots coach Bill Belichick and former bodybuilder Lou Ferrigno, who became famous for playing the Hulk in the television show The Incredible Hulk during the 1970s and ’80s.

Oz took to Twitter to confirm the appointment: “I’ve been supporting children’s health programs with @HealthCorps and appreciate the need to improve lifestyle opportunities for our youth. Serving on @FitnessGov offers a platform to amplify the best practices shown to work across our school systems,” Oz tweeted on Friday.

I've been supporting children’s health programs with @HealthCorps and appreciate the need to improve lifestyle opportunities for our youth. Serving on @FitnessGov offers a platform to amplify the best practices shown to work across our school systems. https://t.co/dOgapXQinI

The President’s council on sports, fitness and nutrition forms part of the Department of Health and Human Services. According to the HHS website, the council “engages, educates, and empowers all Americans to adopt a healthy lifestyle that includes regular physical activity and good nutrition.”

Born in Cleveland, Ohio, to Turkish parents in 1960, and now based in New Jersey Mehmet Oz catapulted to fame after regularly appearing as a health expert on The Oprah Winfrey Show for five seasons. He was given his own programme, The Dr. Oz Show, in 2009, which is co-produced by Oprah Winfrey’s Harpo Productions and Sony Pictures Television, and has an estimated weekly global audience of 15 million.

The physician uses his daily TV talk show to discuss a variety of health topics. Oz has hit controversy before for challenging conventional medical wisdom and the practices of the food and pharmaceutical industries, where he believes they have an adverse effect on people’s health.

Some scientists and politicians have accused Dr Oz of sharing ‘false medical advice’ on his show, specifically around weight-loss products in 2014, which prompted his appearance at a Senate sub-committee hearing on health and consumer protection. Its chair, Senator Claire McCaskill grilled him for calling some products ‘magic weight loss cure for every body type” live on his show.

Dr. Oz stressed during the hearing that he believes in the supplements he has talked about on his show, does his own extensive research into them, and also gets his family to try them. However, he stressed that he has never endorsed specific supplements or received money from the sale of supplements. Nor has he allowed his image to be used in ads for supplements.

When some doctors again criticised him the following year, Dr. Oz issued a written statement in response saying, “I bring the public information that will help them on their path to be their best selves. We provide multiple points of view, including mine which is offered without conflict of interest.”

In 2017, Dr Oz teamed up with Turkish Airlines. Last summer, he recorded an episode of his TV show on board one of their flights from Istanbul to New York flight. He also appeared in a commercial for the airline called 5 Senses with Dr Oz, that first aired during Super Bowl earlier this year and which has been viewed more than 86 million times on YouTube.