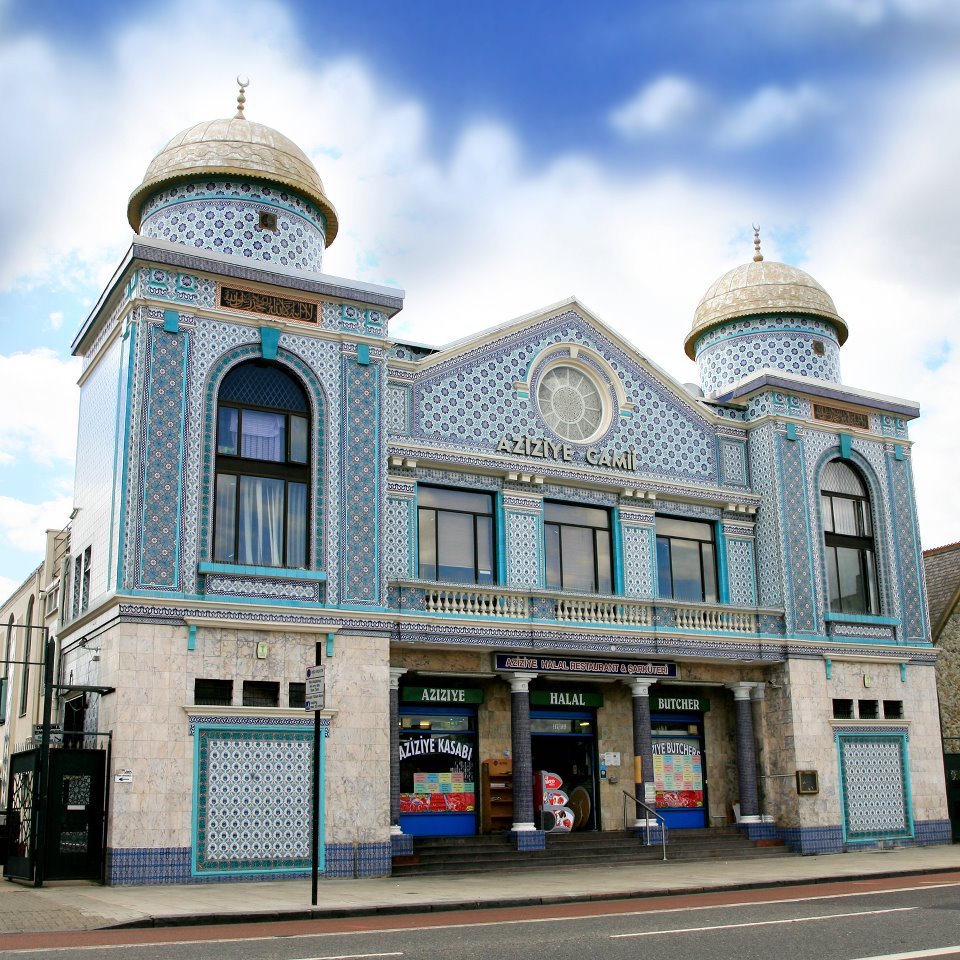 A Turkish-owned mosque in North London has featured in a short video about ten of Britain’s most distinctive mosques. The 2-and-a-half minute sequence of photos has been compiled by anti-Islamophobia body MEND (Muslim Engagement and Development). It opens with images of Aziziye Mosque and its stunning Ottoman-inspired domes and décor.

Other mosques in the video include London Central Mosque in Regent’s Park, the Jameah Mosque in Leicester, Glasgow Central Mosque, the Shah Jahan Mosque in Woking, and Didsbury Mosque in Manchester. The clip concludes with the soon-to-open Cambridge Mosque. This purpose-built religious space is Europe’s first eco-mosque, with its pillars designed to look like intertwined trees.

Titled Most Beautiful UK Mosques, the video has been viewed more than 11,000 times and shared over 400 times since it was posted on MEND’s Facebook page on Wednesday.

A local landmark, Aziziye Mosque is situated on Stoke Newington Road, in the heart of London’s Turkish community. Formerly a cinema, the building was bought as a place of worship by British Turks in 1983, who set up a dedicated trust to administer the site. Those Turkish Muslims who had been using the top floor of nearby Simpson House (which at one time also housed the Turkish-Kurdish Halk Evi) as a makeshift mosque subsequently moved to this new sacred space.

Plans to convert Astra Cinema into Aziziye Mosque were developed by Turkish Cypriot architect and civil engineer Oktay Hamit under the patronage of businessman Remzi Gür. Hamit was also behind the designs for Shacklewell Lane Mosque, although was not involved in its build.

Hamit’s plans for Aziziye are fashioned in the tradition of Ottoman Turkish mosques, with a large central dome and two minarets. These were sympathetic to the building’s existing design, which had curved top towers either side of the main front entrance.

While the outer part of the building was completed fairly quickly, it took more than a decade before its façade and the mosque’s interior was completed. In 1994, the auditorium was gutted, which removed all traces of the former cinema. Turkish tiles, chandeliers and other decorative elements were all specially commissioned and imported from Turkey, adding to its authenticity.

The mosque offers services in Turkish, with room for 2,000 people and separate prayer rooms for men and women. The building also boasts a halal butchers, restaurant, education centre and function suite.

NOTE: Article updated 1 July 2018, based on additional information from the community that a new trust had been set up to oversee Aziziye. Additional details about the mosque’s conversion from a cinema have also been added.