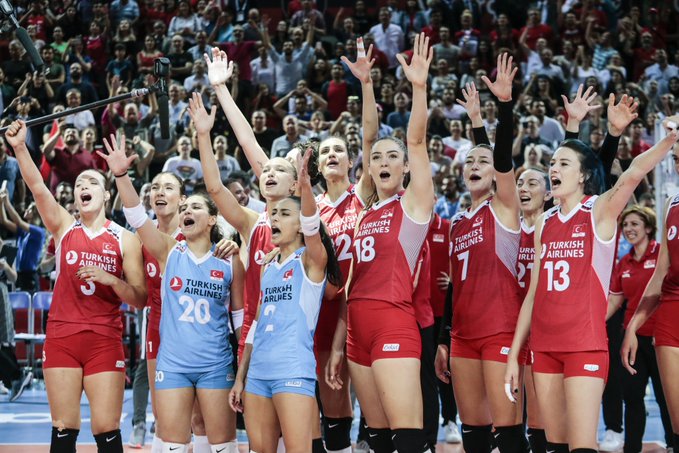 Turkey beat Poland 3-1 in the second semi-finals of the Women’s European Volleyball Championships earlier this evening, to book their place in the final against reigning champions Serbia. In-form Eda Erdem Dündar was again Turkey’s top scorer, with a tally of 19 points

Roared on by home fans at the Ankara Sports Hall, the ‘Sultans of the Net’ looked to be in cruise control, taking the first two sets 25-17 and 25-15. However, Poland bounced back to win the third set 14-25, before Turkey resumed dominance in the fourth, with a 25-18 win.

The Turkish side had been buoyed by a winning streak against Poland in the run-up to this game. They had beaten the Poles at the final of the European Games in Baku back in 2015 and most recently, at a FIVB Volleyball Nations League match earlier this year.

A sell-out crowd of 12,000 is expected at tonight’s final at the Ankara Sports Hall, where Turkey takes on Serbia for European gold.

The Serbs beat Italy 3-1 in the day’s other semi-final, maintaining their perfect form at this tournament, having won all their matches. The European champions will fancy their chances against Turkey, after beating them 3-1 in their Pool A game last week.

The Turks, however, will have home advantage and their confidence boosted with their current form, winning five games on the trot this week. Reaching the European final for only the second time in their history also brings its own excitement.

Turkey’s Kübra Akman said: “Of course, we are very happy to be in the final. It was a dream day with both our audience and our own performance. We made some mistakes in the third set, but we knew how to make up for these. We are very happy. Many thanks to all the supporters!

“[On Sunday] we expect such an atmosphere again. It will be a much harder match than this one, but we will be ready for it. We made it happen today and I hope we can do the same tomorrow and become European champions on home soil.”

How to watch Sunday’s EuroVolley final

The game kicks off on Sunday, 8 September, at 7.30pm local time. Turkey’s national broadcaster TRT is televising the match live on its TRT Spor channel. Coverage starts at 7.20pm.

The free-to-watch channel is also available to watch online from here.

The bronze medal match between Italy and Poland, which starts at 5pm local time, will also be screened live on TRT Spor.