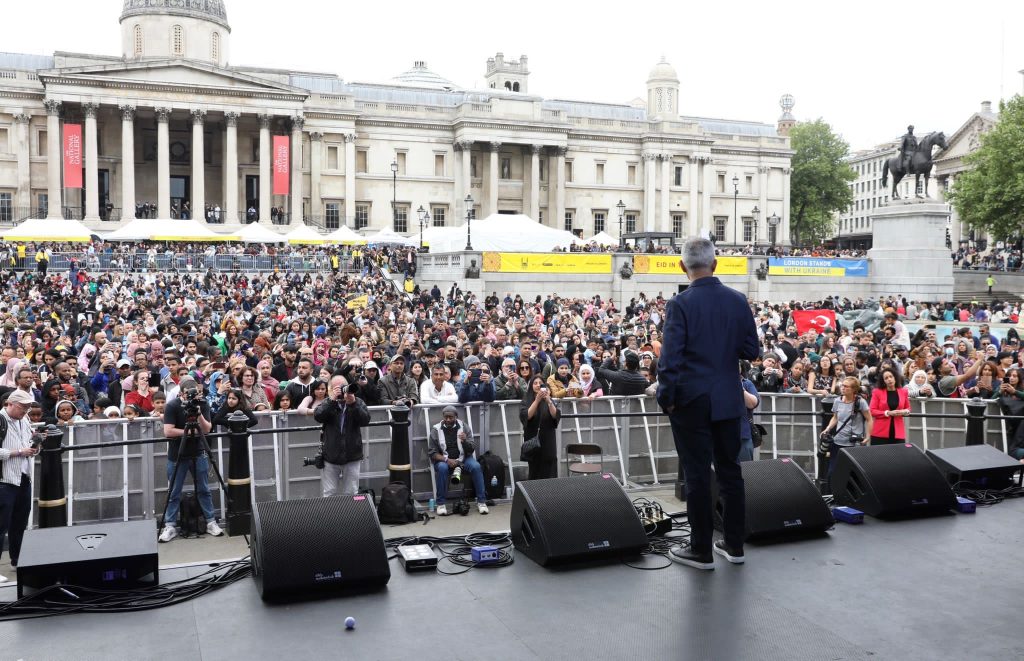 An annual free festival in Trafalgar Square for London’s large Muslim community to celebrate the end of Ramazan/ Ramadan saw Turks participate fully for the first time this year.

The weather was for the most part warm and rain-free for Eid in the Square, helping to attract over 25,000 through the course of the day.

The six-hour event, hosted by British Asian television presenters Mistah Islah and Mehreen Baig, kicked off with a prayer at midday.

Many congregated in front of the large stage, which staged a wealth of entertainment from a broad range of Muslim communities. The line-up included live music courtesy of artists such as the Arfoud Brothers and Sisters, and Nafees Ifran & the Qalandar Qawwali Band, dance from young female students at Grace and Poise – the world’s first Muslim ballet school, comedy sketches from The Halalians, and interviews with Muslim Heroes of London conducted by author and advertising guru Shelina Janmohamed.

Every inch of Trafalgar Square was used, with activities specifically for children and young people, including a sports area, storytelling, mehndi (‘kına’), face painting, and drama workshops, and stalls on three sides of the fenced-off Square. There was also a prayer tent for Muslims.

The buzz from this Eid al-Fitr / Ramazan Bayramı festival, which had been absent for two years due to the pandemic, was palpable throughout the day, with the central London location of this famous landmark attracting Muslims and curious non-Muslims alike.

The London branch of Turkiye’s Yunus Emre Institute (YEI) was also present, as part of a parade of stands in front of the National Gallery. The YEI stand enjoyed a constant stream of visitors eager to learn more about Turkish arts and culture through live demonstrations in ebru (marbling), calligraphy, and Iznik tiles, while sharing details about Turkish cuisine.

Mayor of London Sadiq Khan went on a walkabout to sample the atmosphere himself and also addressed the large crowd present from the main stage.

“This is one of the most famous squares in the world. I’m a firm believer that our diversity is a strength not a weakness.

“We should celebrate our diversity. It’s wonderful to see Muslims and non-Muslims coming together to celebrate this most important festival for the religion of Islam in this fantastic square in London.”

Now in its seventeenth year, Eid in the Square was previously criticised for not reflecting the diversity of Muslims in London. PR consultant Ipek Ozerim was invited on to the Mayor of London’s Advisory Group for Eid in the Square to ensure Turkish participation at this year’s event.

“Although the events team had limited time to prepare and promote this year’s Eid in the Square, this family-friendly festival was absolutely incredible. There was something to do for everyone and, from a Turkish point of view, it was great to see our community represented too,” said Ozerim.