Talk and book-signing: 100 years after their empire ended, author Diane Darke delves into the cultural legacy of the Ottomans 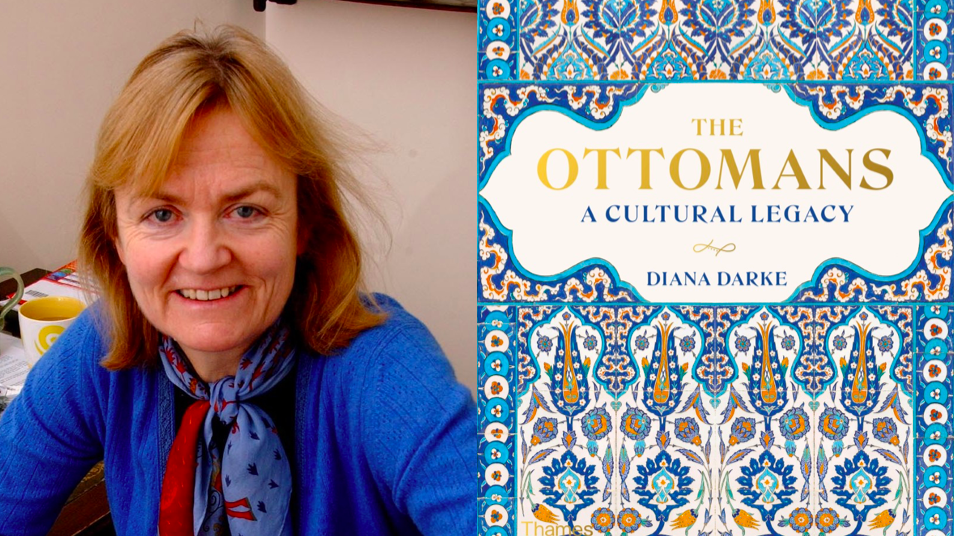 The 1st of November 2022 marked exactly one hundred years since the Ottoman Empire officially ended. In existence for over 600 years, and widely regarded as one of the greatest ever empires, the Ottomans left an indelible mark on our lives.

Now a new book by Diane Darke, The Ottomans: A Cultural Legacy, re-examines the impact of the Ottomans by exploring their unique contributions and achievements in architecture, cuisine, music, science, and medicine, as well as the political challenges they met.

On 17 November, Darke will be giving a talk about the findings in her fascinating book at the Yunus Emre Institute in central London.

This special event, organised in collaboration with publisher Thames & Nelson, will be moderated by British author and journalist Tharik Hussain, who last year published his own award-winning book, Minarets In The Mountains: A Journey into Muslim Europe.

The evening will start with a talk by the author and the Middle East Cultural Expert Diana Darke, and will be followed by a Q&A session and book signing. The event is open to the public and free to attend, but prior registration is needed – see below for link to Eventbrite.

A hundred years after the abolition of the Ottoman sultanate on November 1, 1922, enough time has passed to re-examine the Ottomans and reassess their legacy.

This book explores their unique achievements in architecture, cuisine, music, science, and medicine, as well as the political challenges they met.

The Ottoman Empire faced issues shared by modern European and Middle Eastern countries: how to maintain a balance between religious ideology and secular politics and how to promote fairness and equality among citizens in a multicultural society.

The Ottomans understood how to harness the talents of their diverse populations. Their dynamism and resilience helped fuse the cultures of Asia, Europe, and Africa, from the Himalayas to the Sahara, absorbing whatever impressed them, from Mongol armour to Persian tile work.

Alongside their essential rigour, they enjoyed the finer aspects of life: in music, cuisine, and art, unafraid, even as rugged fighters, to display their love of flowers and gardens, especially tulips and roses.

Behind the fine robes, carpets, and ceramics on display today in their great architectural monuments like Istanbul’s Topkapi Palace Museum, lie centuries of migration, trade, and struggle. In this original and beautifully illustrated book, a radically new picture of the Ottoman Empire is revealed.

Diana is a Middle East cultural expert with special focus on Syria. With degrees in Arabic from Oxford University, and in Islamic Art & Architecture from SOAS, London, she has spent over 35 years specialising in the region, working for both government and commercial sectors.

Among her publications are the highly acclaimed My House in Damascus: An Inside View of the Syrian Crisis (2016), The Merchant of Syria (2018) and The Last Sanctuary in Aleppo (2019).

Her book Stealing from the Saracens: How Islamic Architecture shaped Europe (2020), received three Book of the Year 2020 awards. Her most recent book, The Ottomans: A Cultural Legacy, was published on 29 September 2022.

Frequently invited to speak at international events and media such as the BBC, PBS, TRT, Al-Jazeera and France24, her work on Syria has been published by the BBC website, The Sunday Times, The Guardian and The Financial Times. She is a Non-resident Scholar at Washington’s think-tank MEI (the Middle East Institute).

Tharis is a travel writer, journalist and author specialising in Muslim heritage and culture. His debut book, Minarets in the Mountains; A Journey into Muslim Europe, about the continent’s living Ottoman legacy was nominated for the Stanford Dolman Travel Book of the Year award, the Baillie Gifford Prize in Non Fiction and has just been shortlisted for the British Guild of Travel Writer’s Adele Evans Award.

It was also named a Book of the Year by the New Statesman, Prospect Magazine and the Times Literary Supplement, and a Travel Book of the Year by The Washington Post and Newsweek. Hussain is also a guidebook author for Lonely Planet, and has written guides to Saudi Arabia, Bahrain, Thailand, London and Britain; for the latter he wrote the very first mini guide to exploring Muslim Britain.

He has developed Britain’s very first Muslim heritage trails in Woking, Surrey; produced award-winning radio for the BBC World Service on America’s earliest mosques, and been published by the likes of the BBC, The Times, National Geographic Traveller, The Guardian, Al Jazeera and The Sunday Telegraph.

Hussain is also a fellow at the Centre for Religion and Heritage at the University of Groningen, Netherlands.

Title: The Ottomans: A Cultural Legacy by Diana Darke

Admission: the event is free to attend, but prior registration is needed. Click here to register via Eventbrite