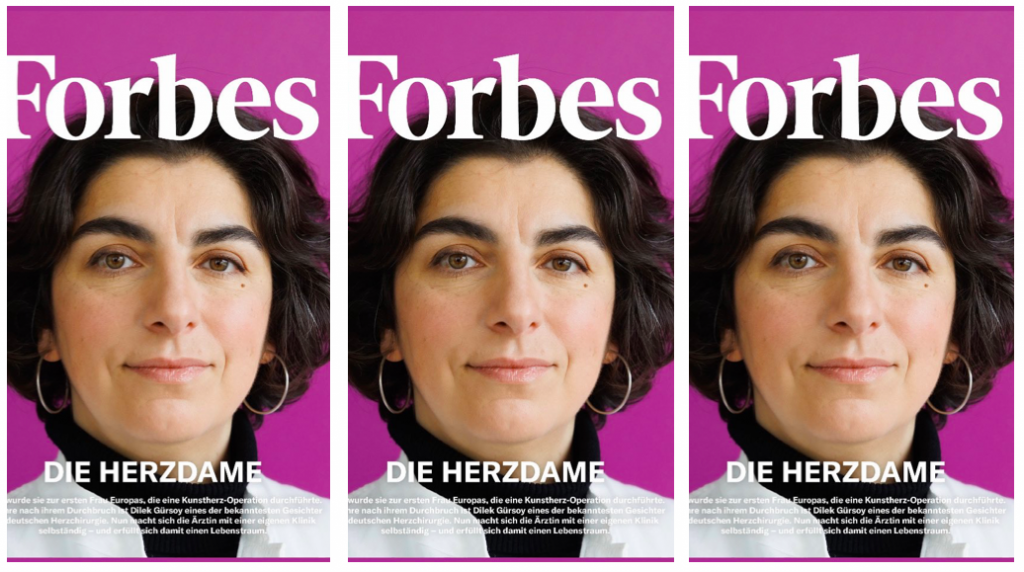 One of Europe’s leading cardiac surgeons, Dilek Gürsoy, is on the front cover of the new German edition of Forbes Magazine, that is published on 3 November 2022.

The German Turkish doctor, whose family is originally from Fatsa, in the Black Sea Province of Ordu, is being celebrated for her vital work in artificial heart surgery.

Gürsoy, 46, is the first – and to date only – female cardiothoracic surgeon in Europe to implant a total artificial heart, which she first carried out in 2012.

The pioneering surgeon has helped to develop a new artificial heart that is free of wires and external power sources based on her extensive experience of implanting artificial hearts, as she explained in her interview with Forbes.

“Heart failure is an essential problem. [Heart] organ donations are scarce. Therefore, total artificial heart research should be [more] important and more budget should be allocated,” she also stated.

Remarking about her front cover appearance, Gürsoy said: “I am honoured to be on the cover of the German issue of the world-famous magazine as Forbes.”

The interview includes details about the surgeon’s plans to establish a specialist heart hospital in Germany and the outcome of a new European study into artificial hearts.

Currently the chief physician at Clinic Bel Etage in Germany’s Düsseldorf province, Gürsoy has performed heart surgeries not just in Germany, but internationally too, including in India and her ethnic homeland of Türkiye.

She is the daughter of a working class family who emigrated to Germany in 1969 as guest workers. She was born and raised in Neuss, in Germany’s North Rhine-Westphalia, and graduated from medical school in 2003.

Gürsoy, who is very close to her family, lost her father to a sudden cardiac arrest when she was 10 year old.

She has previously said that her mother is her “hero” for raising her and her siblings as a single mother, working for more than 40 years to support the family.

“I love spending time with my family; I spend a lot of time with my mother. When I listen to how my mother lived, I think that our conditions are very good today, you need to appreciate it,” Gürsoy explained.

Her work has attracted major interest. In September 2017, scientist-turned politician Angela Merkel, the then German Chancellor, contacted Gürsoy to discuss her pioneering research and surgery.

In 2019, Gürsoy was given the VICTRESS Tenacity Award, and in the same year, she was also presented a prestigious German Medical Award, and was named “Medizinerin des Jahres 2019″(“Physician of the Year 2019”).