The Meze Bexleyheath, Skewd, and Tarshish among the winners at this year’s British Kebab Awards 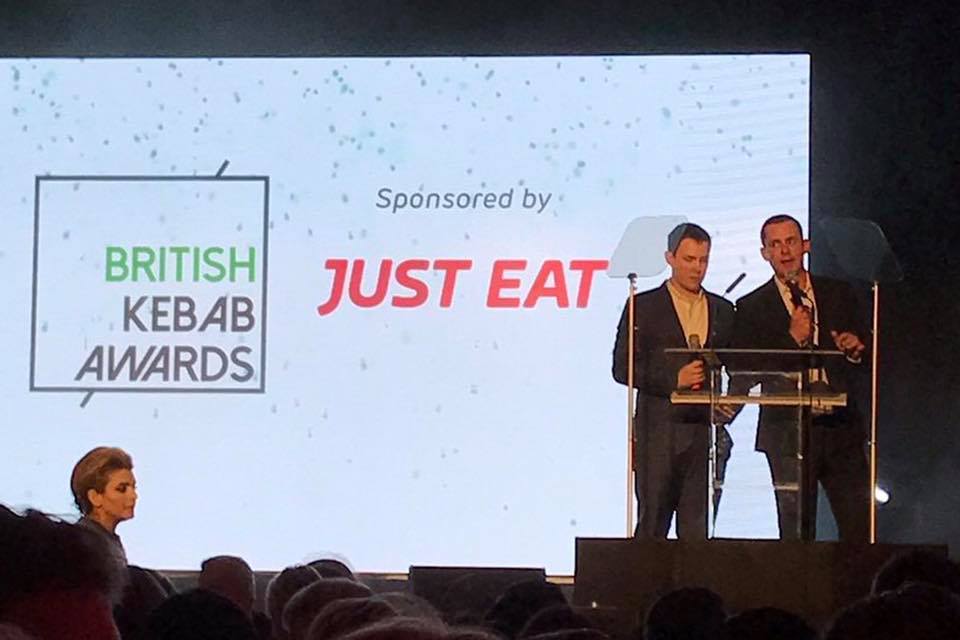 The kebab – a national dish of Cyprus, Turkey, Greece, and now Britain it seems – was lavished with praise and its protagonists honoured at the 5th annual British Kebab Awards. Sponsored by Just Eat, the plush ceremony was held at the Westminster Park Plaza Hotel in Central London on Sunday 26 February 2017.

Approximately 1,200 people attended the event, among them MPs, entrepreneurs, and a host of media from outlets such as BBC News, Channel 4, The Financial Times and the Daily Telegraph. Worth £3bn to the British economy, the kebab industry is big business and thanks to Ibrahim Doğuş and his CEFTUS organisation – the founder and organiser of the kebab awards – it’s now nationally recognised as such.

The evening was brilliantly hosted by Chris Stark and Scott Mills (pictured above) from Radio 1, whose quips (“Halal everybody”, “Can we have some shish for the speakers”, and “This could get meze”) kept the audience highly entertained, especially during the technical glitches when the stage experienced sound and visuals failure, and the lengthy delays to the main dinner being served to guests.

But nothing could faze these two, not even a mishap over similar-sounding winners: Beckenham’s Köz nearly got presented the award for Customer Satisfaction, when in fact they were the runners up and it was Köşk of Edmonton which had won. While not as severe as the Best Film gaff at the Oscars, it does highlight the challenges Brits face when trying to tell the difference between foreign names!

The crowd took it all with good grace and humour, taking to Twitter to share their thoughts of the ceremony. As a result, at one point the Kebab Awards were trending above the Oscars, which were also taking place on Sunday.

Alongside the laughter and jokes, there was also plenty of serious commentary. Ibrahim Doğuş made a powerful opening speech, in which he mentioned the vital role of immigrants in the kebab sector:

“It is all of the people involved in food preparation, distribution and sales, it is the accountants, the owners, and the entrepreneurs. It is the people with a vision, who are prepared to invest, take a risk and work hard.”

“It is always worth remembering that all too often these people are immigrants, or the children of immigrants. In this year of Brexit, let’s not be blinded to the positive contribution of people who’ve come to live in the UK, to put down roots, to work hard, pay taxes and to build the community.”

A raffle during the evening also raised thousands of pounds for the Combat Stress charity, which supports veteran soldiers with mental health issues.

And for all the businesses competing, the British Kebab Awards are a fantastic platform for positive publicity. It’s fair to say the vast majority would struggle to get a local write-up, let alone national media coverage. These awards achieve just that, offering thousands of pounds worth of PR support.

Taking one of the big prizes on the night was Maz Demir, who won Chef of the Year. Four years ago he was awarded Best Newcomer for his Skewd Kitchen in Cockfosters. Demir has continued to build on the restaurant’s early reputation, as evidenced by the many glowing public reviews Skewd receives, including this one left by David C on Trip Adviser yesterday (28 Feb):

“Probably the best Turkish food in the UK. I had the chicken and lamb shish, which were amazing, tender, succulent and mouth-watering. I also had the chicken wings halumi [sic] and calamari for a starter and they were all cooked to perfection”.

Wood Green’s fancy new eatery Tarshish was crowned Best Newcomer. With rooftop views, swish interiors, sizzling kebabs and first-class service, they could have also bagged the Fine Dining award, but that went to Veyso’s Brasserie. The rank outsider from Hertford showed you don’t need to be in the capital to offer a classy, opulent setting and top quality food.

The Iskele picked up the Best Value award and anyone who has eaten at this lovely restaurant off Old Street will know how well deserved this award is. Now a decade old, this City of London diner consistently gets five stars for its tasty, value-for-money food and service.

It’s good also to see dedicated winners for Scotland, Northern Ireland and Wales – so we all know which kebab houses to head to when we’re out of London. Britain’s best kebab takeaways, delivery service (I Am Doner), and even its Best Kebab Van (Atalay) were also honoured. See below for the full list of winners from this year’s 17 categories.