The Mid Summer Ball, inside Istanbul Airport, Olcay Bayır and much more: T-VINE Issue 11 is out now! 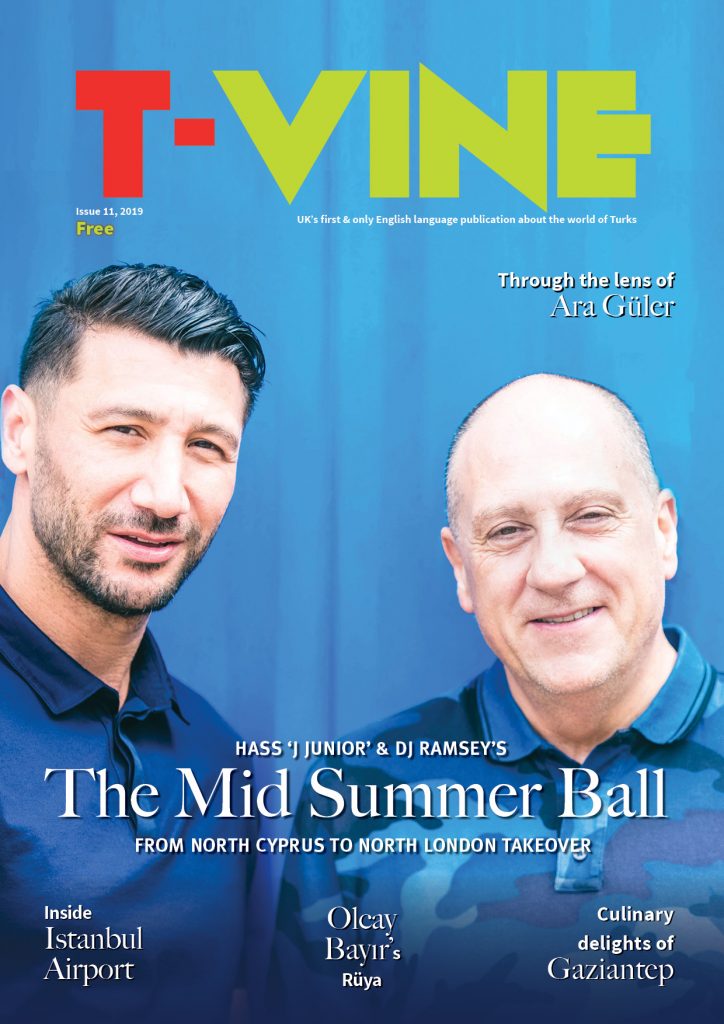 The summer edition of T-VINE Magazine is now out, with Hassan ‘J Junior’ Rediff and DJ Ramsey on this issue’s front cover. The pair have been at the forefront of the UK’s dance music scene and in 2005, decided to bring the aural flavours of London’s clubland to North Cyprus through The Mid Summer Ball. On the eve of their mega Trent Park Country Club bash, this is the inside story of the making of this iconic night.

Also in Issue 11 we interview opera-trained Kurdish Turkish folk singer Olcay Bayır about her London life, and the release of her second album Rüya. We take you on a tour of Istanbul’s mega new airport and writer Yasemen Kaner-Whites visits Turkey’s gastronomy capital Gaziantep.

We review Skewd, the high-end kebab house in Cockfosters whose owner chef Maz Demir has twice won Chef of the Year at the British Kebab Awards, and preview this summer’s big cultural happenings, including a gig at the Jazz Café by percussion legend Okay Temiz.

Our regular features include a round-up of the latest news from the world of Turks, advice for an anxious wife from our resident agony aunt Yonca Ali in Ask Your Abla, and a tasty vegetarian recipe from acclaimed chef Selin Kiaizim from her cookbook Oklava: Recipes from a Turkish Cypriot Kitchen.

You can pick up a copy of the magazine for free from leading London supermarkets such as TFC, International and Yasar Hallim, the TRNC London Representative Office, Turkish community centres and schools

Alternatively, if you’re in the UK, subscribe and have it delivered to your door. Your subscription will also provide vital financial support for T-VINE, an independent publication striving to bring our readers a rich array of stories of the very highest editorial order.