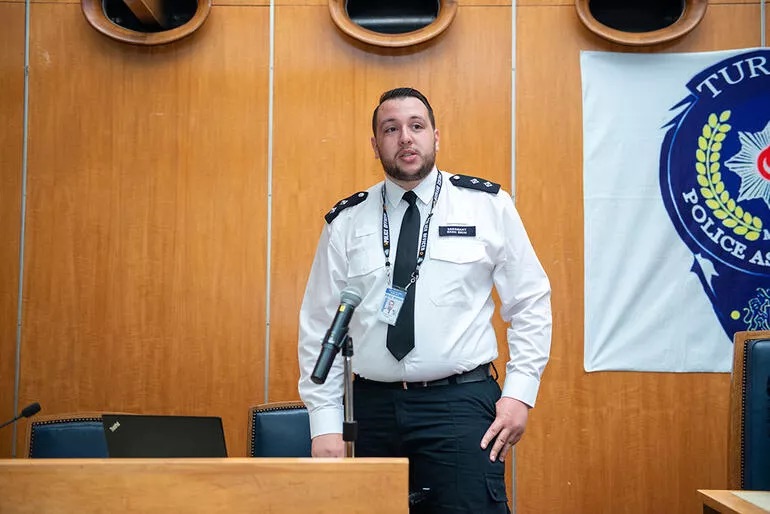 The Turkish Police Association (TPA) chair Sergeant Eren Emin has responded to yesterday’s Metropolitan Police statement apologising to British Turks for the offence caused by its training material that concentrated a whole manner of vile and improbable criminal traits in a single person described as “Turkish”.

In a written statement to T-VINE, the TPA chair said, “The Turkish Police Association welcomes this apology and positive statement from the Metropolitan Police.”

“It was important for the Met to acknowledge the offence caused by its training material and to put measures in place to avoid similar situations,” Sgt Emin (pictured top)  added.

The TPA also gave their nod of approval to changes to future Metropolitan Police training for police officers.

Sgt Emin said: “We are happy with the steps being taken, and look forward to working with our Met colleagues and community members to improve the quality of training for new and existing police officers.

In yesterday’s statement, the Met committed to creating a new “Staff Support Association Reference Group”. This would allow police officers “to contribute to the design and delivery of all training materials both within and beyond the recruit environment.”

The TPA head also urged the community to take up the Met’s offer to vet future training by joining its Community Reference Group.

The body, which is already in existence to help inform general Met understanding of minorities, will have its remit extended to allow “community members” to become an “integral part of the design and delivery of training”.

As part of its reassurance to Turkish and other minority groups that there will be no repeat of the offensive material used, the Met said yesterday it will also allow members of the public to attend their university classes “to see our recruits and their classes taking place”.

“We call on our community to get involved and experience the training first hand,” said Sgt Emin.

The #TPA welcomes the apology to the #Turkish & #TurkishCypriot #community. We call on our community to get involved and experience the new training first hand, if this interests you then please get in touch. We look forward to a closer working with our L&D team. #met #mps pic.twitter.com/XOq2G1O0Ac

The TPA has tweeted in full the Met’s apology to Turkish and Turkish Cypriots, which came in the form of a letter signed by A/Chief Superintendent Tamsin Jones, who is the Head of the Met’s Centre for Initial Recruit, Learning and Development.

The Met is believed to be the first major British institution to publicly apologise to British Turks on an issue involving negative racial profiling of the community.